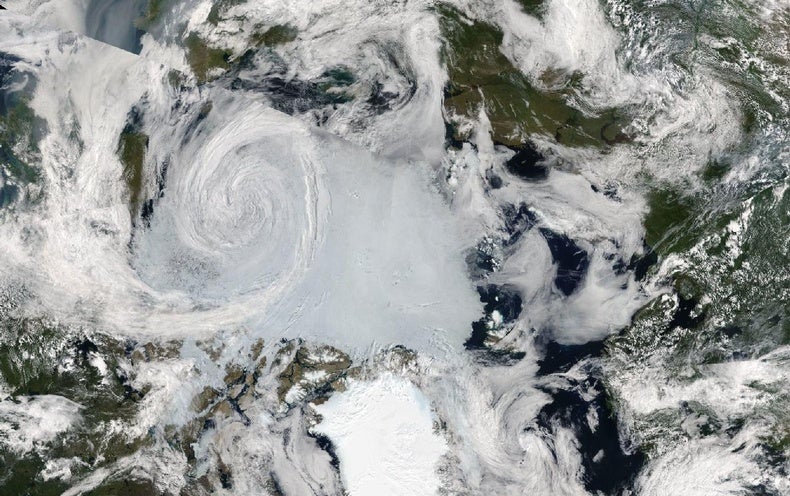 Arctic sea ice hit an all-time low for July against a backdrop of record-breaking temperatures and raging wildfires at the northern reaches of Earth.

Then a cyclone began swirling over the thinning ice this week.

Taken together, those conditions have made scientists concerned about what the rest of the season may hold as thousands of miles of sea ice melts away every day.

Ice cover in the Arctic Ocean hit an all-time low for this time of year on July 15, according to the National Snow and Ice Data Center. Sea ice was disappearing at a rate of more than 56,400 square miles a day earlier this month compared with the typical rate of 33,000 square miles.

Satellites have never seen so little ice in July.

The Siberian coast has been hit hardest. The Northeast Passage, a shipping route along the Russian shoreline, was ice-free two weeks ago.

Sea ice typically continues to melt in the Arctic Ocean through the summer, hitting its lowest point in September, before it begins to refreeze. Given the remarkable season so far, some experts have speculated that it could reach an all-time low in September.

That record was last broken in 2012, the most extreme year in history for Arctic ice cover. Sea ice extent that year was 18% lower than the previous all-time low in 2007 and nearly 50% lower than the…

Astronomers Finally Know What Caused That Mysterious Dimming of Betelgeuse

These Orbs Look Like Candy, But They’re Actually Different Flavours of Phobos

South Korea's Woori and Shinhan banks have actually simply revealed their intent to present“crypto-asset services” That indicates that four of the nation's top...
© Copyright 2020 - reporter.am