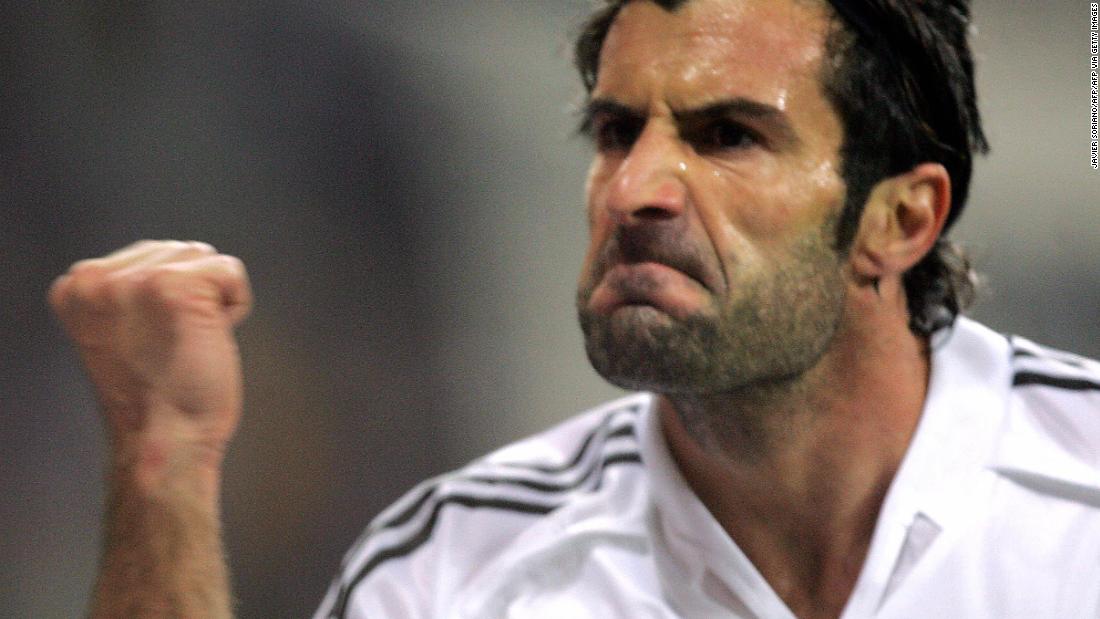 There is the sort of sound that makes a person wince, furrow the brow, stick fingers in both ears, and then there is the screeching and baying of over 100,000 football fans. A 90-minute chorus of hatred directed at just one man on an extraordinary rain-soaked evening in the Catalan capital.

Luis Figo, once of Barcelona but now dressed in Real Madrid white, is walking towards the corner flag. The decibels rise. He was once adored in these parts, but now is the focus of the fans’ fury.

Barcelona supporters are holding up placards with dollar signs, a whiskey bottle becomes embedded in the pitch, officials in raincoats are holding back supporters in the front row; lighters, coins, plastic bottles are hurling down from the stands and, then, a pig’s head is launched towards the Portuguese forward.

It’s gone 10 p.m. and the second half begins. Figo takes his first corner near members of Barcelona’s ultras group, the Boixos Nois. The atmosphere is wild and threatening to become uncontrollable.

Waving his arms, Barcelona defender Carles Puyol appeals to the fans for calm, but more objects are thrown. Riot police gather and Figo takes the corner, which Barcelona goalkeeper Roberto Bonano tips over the bar. Another corner, the sound increases, more objects fall onto the pitch. The referee suspends the match for 16 minutes.

“I was a bit afraid because you never know the objects where they can fall,” Ernest Macia Ballus, a reporter for Catalunya Radio who was at the Camp Nou as a fan that night, tells CNN Sport.

“They can fall on the pitch, or maybe you receive the impact of a strong object somewhere, or because when there’s this kind of atmosphere, there’s a loss of control. It’s dangerous for the players, of course, when taking a corner, for example, but it’s also dangerous for the supporters.

“I was thinking I should maybe leave the stadium, but I didn’t want to because it’s Barcelona-Madrid. It is a unique game and I’ve paid a lot of money. I was afraid and impressed. It was unforgettable. I’d never seen something like this, and I won’t [again].”

Rarely is there a way back from betrayal. Figo was adored during his five years in Barcelona. He was the matador, the heart of the team, its captain. He may not have been born in Catalonia, but fans deemed him one of their own.

When Barcelona won the league and the Copa del Rey in 1998, Figo had dyed his hair in Barcelona colors and, from the balcony of the historic Palau de la Generalitat de Catalunya proclaimed in reference to rivals Real Madrid: “Whites weep. Congratulate the champions.”

However, in the summer of 2000 rumors began to surface that a pre-contract agreement with Real Madrid presidential candidate Florentino Perez had been signed which would see Figo join the Madrid club if he won the election, though Barca fans and even his teammates did not believe it.

It seemed improbable that the star of Barcelona, a club whose slogan is ‘more than a club’ for its defense of the Catalan culture and language, would join Real Madrid — the club of the capital and, during the dictatorship at least, one widely regarded as representing the Spanish establishment.

“In elections you say many things. We rather thought it was a promise that will never happen,” recalls Ballus. “The promise was done by a candidate who was not supposed to win.”

Under Lorenzo Sanz, the man who had been in charge since 1995 and was fighting for re-election, Real Madrid had ended its 32-year wait for the European Cup, winning the competition twice in three years.

Sanz might have been the favorite to win the election, but ultimately he could not compete with Perez’s outrageous pledges.

It has been widely reported that Perez had polled Real Madrid’s members and asked them which player they most wanted if they elected him president. Their answer? Figo.

Perez also told the club’s 80,000-plus members registered to vote in the election that he would pay their membership fees for the following year if he failed to sign Barcelona’s star player.

“We didn’t give too much credit that he would bring Figo because he was very expensive,” adds Ballus. “But we started doubting when Florentino promised that he would pay the annual membership to all the members.”

Spanish daily Marca was the first to report a secret deal, a contract reportedly dated July 1 and signed by Figo’s agent Jose Veiga.

If Perez won the election and Figo refused to leave Barcelona, Figo would pay a penalty fee of around $34 million, so the reports said. If Perez lost the election, Figo would keep around $2 million.

The document also apparently committed Perez to giving Figo $25 million if he became Real president and didn’t sign him. Meanwhile, Perez deposited £44 million ($55m), the value of Figo’s buyout clause and a world-record transfer fee, at the Spanish Football Federation.

When the media reported the deal, Figo denied a pre-contract agreement had been made. “I’m not so mad as to do a thing like that,” he told Diario Sport, while Sanz dismissed Perez’s promise, saying Figo’s capture was “probably to be followed by the signing of Claudia Schiffer.”

However, a day after claiming he would be “mad” to leave Barcelona, Figo admitted there was an offer from Perez “and that is why I want him to win the elections.” According to the Guardian’s Sid Lowe, the offer was a £2 million advance ($2.5m) plus £5m-a-year ($6.2m) in wages.

Arnau did not have time to say goodbye to his teammate.

“Perez won this election and next Figo was in the press conference of Real Madrid,” he remembers. “It was [a] bomb in the dressing room, the players like me didn’t believe it was possible. We had lost a very important player. Figo was our light. Our three top players at the time were Figo, Patrick Kluivert and Rivaldo.

“This is just my opinion, but I think Figo thought never is it possible for Perez to win the election.”

While Barcelona’s players were shocked and saddened, the feelings of the club’s fans were rather more intense.

“We felt an explosion of anger and hatred because he was an idol in the city,” says Ballus. “There’s no bigger betrayal. It’s like if you are trusting your wife or husband and then all of a sudden you discover that he has another life.”

Former Portugal and Atletico Madrid player Paulo Futre, who acted as a go-between in the deal for Figo’s agent, has spoken of how Veigo broke down in tears.

“Figo had no way out, he was tied to the clause,” Futre is reported to have told El Chiringuito two years ago.

“You have to put yourself in their place. He was one of the best players but one of the worst paid; he had an offer that was six times higher, but of course, when this comes to light, it was a court issue that Figo or Veiga had to pay, or both.”

In an interview on Spanish radio in 2016, Figo explained to host Michael Robinson that the much-talked-about deal was made between Perez and his agent Velga.

“Florentino, who was a presidential candidate, brokered a deal with my agent, not with me because I was under contract and couldn’t sign an agreement with someone running for office,” he said, according to Spanish daily newspaper AS.

“What happened next was my decision. Seeing what the situation was and with the commitment of my agent, I decided to sign for Real Madrid.”

For Perez, the one-time underdog who now wore the crown, the signing of Figo was, he said in a 2017 interview with Fox Deportes,“like ripping out” Barcelona’s heart.

Former Barca president Joan Gaspart, who was elected Barca president the day before Figo was presented as a Real Madrid player, has spoken of the former Portuguese in less than flattering terms.

Gaspart, who lasted just three years as president, was particularly unhappy that the timing of the transfer left Barca little time to buy a replacement of Figo’s stature for the start of the 2000/2001 La Liga season.

Figo returned to the Camp Nou three months later as a Real Madrid player. Bodyguards were reportedly detailed to look after him and he blocked his ears to the crowd’s whistles.

But the reception he received on his first return to the Camp Nou was nothing compared to what would happen two years’ later, in the match everyone remembers because of the pig’s head which, over the years, has become a symbol of the great betrayal.

Though Barcelona had pocketed millions, the club struggled to replace Figo. Meanwhile, for Real, Figo’s capture signaled the beginning of the Galacticos era as Zinedine Zidane, Ronaldo and David Beckham followed in subsequent seasons. And it was in Real’s colors that Figo won the Champions League, the 2000 Ballon d’Or and the 2001 FIFA World Player of the Year award.

In Barcelona, Figo’s achievements have almost been wiped from history. In the buildup to the 2015 Champions League final between Barcelona and Juventus in Berlin, the club requested that Figo not represent them in a legends match.

The pain is still felt because he had meant so much.

“Well, 20 years later they [Barca fans] still hate Luis Figo,” says Ballus. “If he came to the Camp Nou, but he won’t, but if he came, of course there would still be a rise of indignation.”

Why Joe Biden picked Kamala Harris as his VP

Ever since former Vice President Joe Biden announced he would be choosing a woman as his VP candidate, speculation ran rampant about who it...

Santander, the big scale Spanish bank and among Ripple's significant partners, is still reluctant to embrace XRP as part of its international payment...

Price: (as of - Details) 【Thin&Light Weight】: HBESTORE laptop has a fashion design of 0.7 inch thickness with 0.95kg light weight make the...

In Las Vegas, the show cannot go on

Things were going well at home, too. Flowers, 43, had moved his retired parents to Las Vegas from Chicago the prior year. His wife...

Ever because fans discovered of Justin Hartley and Chrishell Stause‘s sudden divorce filing, there’ s been one dominating theory about the death of...

Musician Sufjan Stevens was so influenced by Jalaiah Harmon, the teenager who developed the popular Renegade dance that went viral on TikTok previously...

LYNCHBURG, Va.-- We could not make this story up if we attempted. Last week, we presented you to a cat named Dennis Quaid...