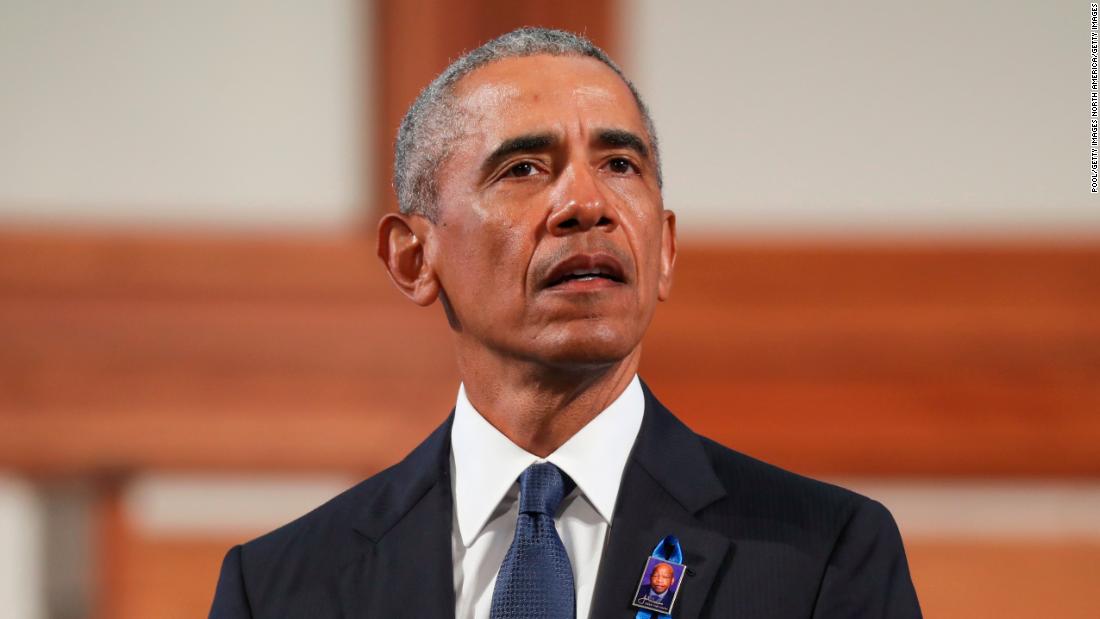 And what a gift Obama was on this day, delivering the eulogy for his friend and hero. He acknowledged the great debt we all owe to Lewis, praised “his forceful vision of freedom,” and reminded us of the effort we need to do to resume America’s faltering march toward a more perfect union.
“Bull Connor may be gone,” Obama said, “but today we witness with our own eyes police officers kneeling on the necks of Black Americans. George Wallace may be gone, but we can witness our federal government sending agents to use tear gas and batons against peaceful demonstrators.”
The former President described how he first met the congressman as a law student, when he told Lewis he was one of his heroes. When Obama was elected to the united states Senate, that he told the Congressman he stood on his shoulders, and when that he was elected the first Black president, that he hugged him and said his victory had been authorized only by the sacrifices Lewis made.

Thursday, in front of a separate (and socially distanced) congregation, the former President marveled at Congressman Lewis’ bravery, boarding a bus with fellow civil rights activist Bernard Lafayette in 1960 to desegregate it.

“Imagine the courage of two people Malia’s age — younger than my oldest daughter — on their own to challenge an entire infrastructure of oppression.”

Former President Obama reminded us of the perseverance of John Lewis, but I’m reminded of their own perseverance. As the first Black president, that he fought against birtherism, dealt with hostile Republicans in the Senate and was denied his right to appoint a Supreme Court justice.
Before the congregation, Obama called for Congress to pass a new federal voting rights act, named in Lewis’ honor, but then urged lawmakers to be ready to help keep going, to help make the law better.
The Voting Rights Act became law due to the March 7, 1965, march from Selma to Montgomery that became better called Bloody Sunday. State troopers attacked the nonviolent marchers, cracking the skull of a 25-year-old John Lewis on the Edmund Pettus Bridge.

As Obama noted, news photographers are there. The American public saw it happen, and the response generated the Voting Rights Act’s passage. Congress renewed the act in 2007, however in 2013, John Roberts’ Supreme Court gutted it, declaring parts of the act unconstitutional.

“Once the Supreme Court weakened the Voting Rights Act,” Obama said, “some state legislators unleashed a flood of laws designed specifically to make voting harder, especially, by the way, state legislators where there’s a lot of minority turnout and population growth. That’s not necessarily a mystery or an accident. It was an attack on what John fought for.”

The House passed a new Voting Rights Advancement Act on December 6, 2019, aimed at fixing the damage inflicted by the Supreme Court majority. Yet the Republican-controlled Senate under Speaker Mitch McConnell’s leadership has brought no action. Voting is just a fundamental right and Congressman Lewis was willing to give his life so that it will be protected for people all.

The Voting Rights Act needs to be restored and strengthened and when again get to be the law of the land.

Taking the liberty of paraphrasing recent comments by Congressman Cedric Richmond, I would tell Sen. McConnell: Keep John Lewis’s name out of your mouth. The Senate must pass the Voting Rights Advancement Act and the President must sign the legislation and until they do, we have our marching orders. We will continue to make good trouble, like John Lewis counseled. Necessary trouble.
Congressman Lewis continues to inspire his country. Two days before he died, he submitted an essay to The New York Times and asked that it be published on the afternoon of his funeral. In it, he’d some parting words of encouragement for America.

It brings me a tiny bit of comfort to know that at the end of his life he was “filled with hope” about the future, as he wrote, inspired by the protests across the country — and world — because of the killing of George Floyd.

Congressman Lewis recently called voting “the most powerful nonviolent tool we have in our Democratic society.”

To keep it safe, he’s now passed the baton to us.

The Reds revealed that infielder Mike Moustakas has actually been put on the 10- day injured list (retroactive to August 6) due to...

Brewers break out in sixth, club Reds 9-3 By Reuters

Price: (as of - Details) Fast Charging Speed & LED Indicators: They are charged through the EXT ports in 2 hours, say goodbye...

International leaders signed up with a virtual donor conference led by France and the UN in the after-effects of the disastrous surge, vowing...
© Copyright 2020 - reporter.am