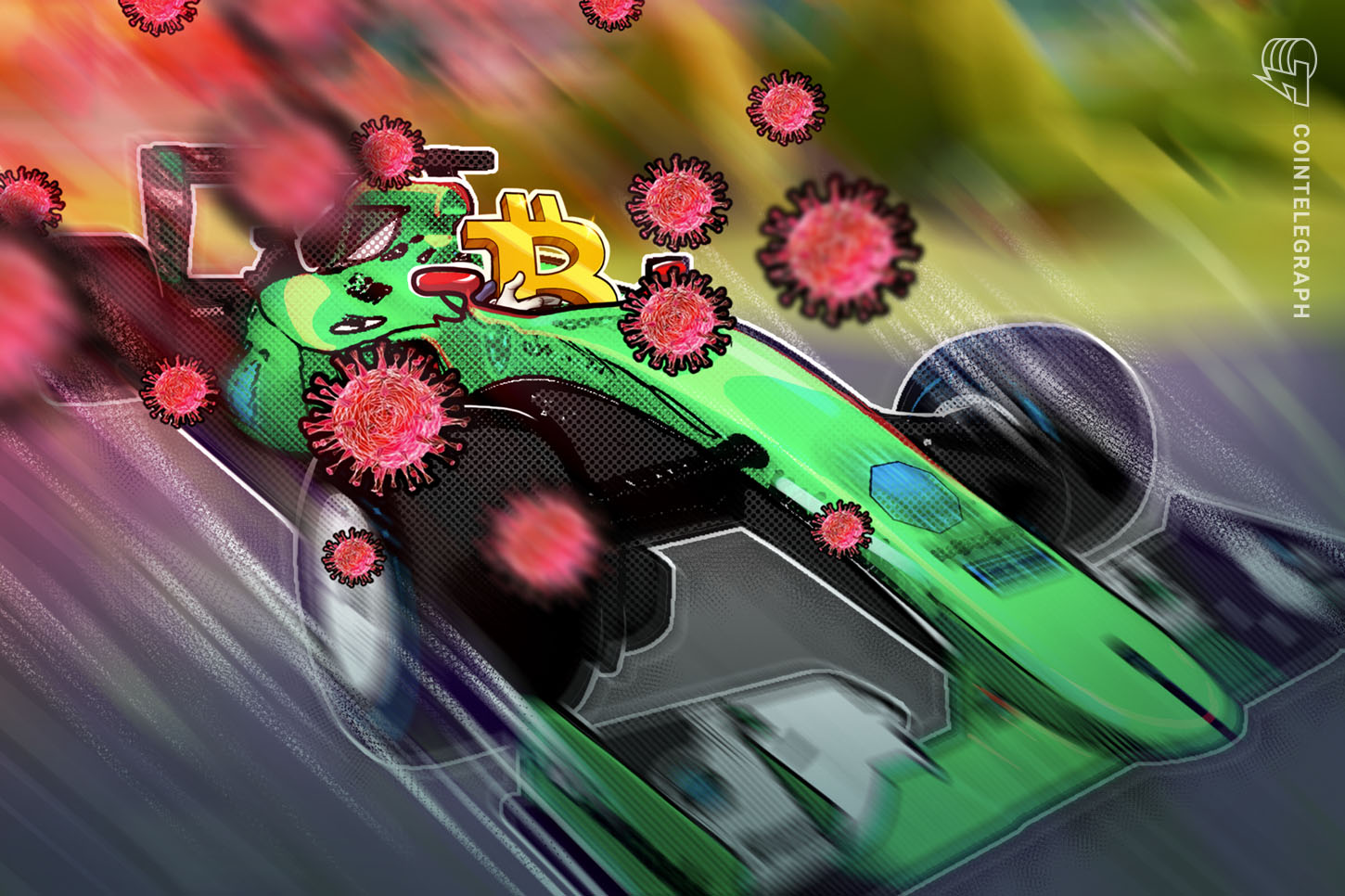 COVID-19 is now a defining moment for the duration of our society, but the impact of the pandemic is visible through its effects on the economy and society in general. From the perspective of a Bitcoin (BTC) investor, there are numerous things to consider.

Coronavirus emergent patterns regulate how the illness spreads and sets the society on a particular course in to the future. The impact of the novel coronavirus on consumer society has been tremendous. The effect has mostly been seen as the closure of workplaces, causing people either working from home, getting laid off or in some cases, being furloughed.

Unemployment figures have set records in western countries, especially in the United States. The road to economic recovery is still not known. The current situation generally seems to indicate that businesses need new kinds of fundraising to be able to fully recover or to restructure.

The lag between infection cases and deaths is around 2 to 3 weeks: This means that whenever the epidemic resurfaces, in accordance with data obtained from the very first wave, this happens predictably, in risk groups and regionally.

Exposure to blockchain-based assets is concentrated among young male professionals aged around 30. If we observe new entrants in the blockchain asset classes among consumer segments, we might observe that the maximum numbers of new users have already been coming geographically from countries where the local currency is experiencing high inflation, concentrating roughly in Africa and Latin America. Socio-economically, they truly are middle-class professionals. While nearly all are Bitcoin maximalists, there has been an ever-increasing interest in the altcoin markets.

Recently, a buying spree fuelled by videos shared on the social networking app TikTok caused a significant price spike in the value of Dogecoin (DOGE). The buyers were nearly exclusively teenagers and adults who are current cryptocurrency holders. While Dogecoin has been known as an asset whose value is based entirely on its virality, the recent phenomenon suggests that there are numerous new entrants in the broader cryptocurrency market. It should be noted that this Dogecoin pump took only hours to top out, set alongside the several weeks the eight other times the coin had gained significant value. This signals an impulsive move.

Retail investors in the risk groups typically usually do not invest in Bitcoin or blockchain-based assets. Wealth owned by those within their 70s and above is normally in property, bonds and indices. The same investors, who are the absolute most susceptible to contracting and dying of the novel coronavirus, are the most established inside our society. Meanwhile, statistics show that the deaths are heavily concentrated among working-class individuals, ethnic minorities and the ones lacking usage of quality medical care. Residents of care domiciles have been specially vulnerable.

This is significant since the statistics indicate that the majority of victims of the novel coronavirus are unlikely to hold significant wealth in either old-fashioned or blockchain-based assets. Therefore, the impact of the coronavirus on cryptocurrency and blockchain-based asset markets could be quite negligible, while in old-fashioned markets, the outbreak probably will unlock assets typically held by the victims. Among elderly members of the working class, the majority of wealth is held in residential real estate and pension funds.

This shows that the coronavirus’s impact may make inexpensive real estate even cheaper, specially in the countryside, despite people temporarily looking for relocation there.

The impact on Bitcoin in this respect would be practically nil.

Its influence on institutional money has been two-fold. On one hand, institutions have enjoyed unprecedented support from the us government through bailing out their debt by buying equity-backed bonds, and on the other hand, funds such as Grayscale Bitcoin Trust have seen increased volumes.

Institutions are traditionally viewed as swing traders; they bet on long-term market moves. Institutional curiosity about cryptocurrencies and blockchain-based assets as an asset class has been steadily growing with the number of investment instruments increasing over the past five years. Typically, institutions hedge into cryptocurrencies and blockchain-based assets with a narrow focus on a handful of tokens and sophisticated trading methods, such as leveraged trading and options.

On the technical front, institutions have implemented blockchain technology to aid their existing services.

This implies that institutions see blockchain as a tool to facilitate lag and cryptocurrencies as a solution to hedge their portfolios outside traditional markets. Arguably, this renders the influence of institutions regarding blockchain-based assets a stabilizing factor as opposed to a market mover.

Bitcoin fundamentals have shown signs of transitioning into the next growth cycle in the next couple of years. The halving has limited the supply and placed the asset on par with leading fiat currencies regarding inflation, at around 2% yearly.

The stock-to-flow ratio is an indicator that shows over all historical trends in Bitcoin. Currently, the indicator suggests an impending rise in value on the long term. Bitcoin has risen in value at some point after halvings because of increased pressure caused by decreased supply.

Lengthening cycles is an assumption based on the hard-coded feature of halving in Bitcoin’s supply. Each cycle, the halving takes longer to occur, therefore driving a longer cycle of emergence in asset value. Data supports this assumption, as each cycle thus far has brought longer to appreciate its potential.

Startup companies in the crypto industry have increased exponentially in both numbers along with total seed capital raised over time across market cycles. The ICO bubble of 2017 indicates itself to be an impulsive move rather than a one-time event. According to ICORating, there is certainly still a substantial quantity of projects raising funds through initial coin offerings. The problem cited during the 2017 market bubble around research has cause the takeover of ICOs by trusted third-parties. Increased government regulation has strengthened the fundamentals of average ICO, driving interest especially among scale-ups and startups whose product a few ideas benefit from a blockchain-based asset either as a regulated security or as a consumer utility. Consequently, still another larger ICO bubble may possibly start to grow in the upcoming market cycle.

Organic consumer demand bottomed during the first wave of COVID-19 in western countries, which led to a significant drop in Bitcoin’s price. This dip was due to initial panic-selling reaching the 200-week moving average and dipping below it, followed by a quick, V-shaped recovery. Data suggests that while institutions sold, retail bought the dip.

According to the present day portfolio theory, quick V-shaped recoveries indicate strong fundamentals on the asset. It is safe to claim that the coronavirus at least acted as an event confirming the general uptrend.

The upcoming bull market will likely be driven by consumer demand. While retail investors are restructuring their personal portfolios on earth outside of cryptocurrencies, they are prone to become more enthusiastic about the asset class as time passes. The motivation in engaging in the market is dominated by hedging against inflation and being exposed to assets which may be used across national borders.

“Nowadays, we see the correlation of Bitcoin price with S&P 500 of 66%, but we have to consider that it is the bull market. If, or when, the price of traditional assets like stocks drops down because of a second wave of COVID-19, investors will be more actively using protective assets like gold and Bitcoin.”

Bitcoin is seen as a safe haven asset particularly as it is easier for consumers to gain access to than old-fashioned financial instruments. There are no minimum investment amounts, no rules on accredited investors, and the increased availability of exchange services makes the asset class appealing to the average consumer.

Smart money is invested in the beginning in promising projects, whereas dumb money usually hitches a ride on an existing trend close to the top. The distinction, therefore, can be made through the total amount of work necessary to do researching the market, as well as experience of the creators. Smart money represents early adopters. Recently, we’ve seen an explosion in decentralized finance, nonfungible tokens, and much more traditional security and utility tokens. Main street brands, such as European football clubs have entered the market through their own tokens and platforms.

The broader cryptocurrency market is defined for a Cambrian explosion of assets and a market similar to the creation of the net itself. As COVID-19 acts as a catalyst in the dismantling of old institutions and legacy financial systems, it’s going to pave means for cryptocurrency and tokens to take their place.

Bitcoin has laid the inspiration for the future of finance. As Binance CEO Changpeng Zhou stated:

“The pandemic has changed the world as we know it; it will never be the same again. And in this new world, we believe crypto will play an ever increasing role.”

The views, viewpoint expressed listed here are the author’s alone , nor necessarily reflect or represent the views and opinions of Cointelegraph.

Google Ads is Failing to Protect People From Crypto Scams

His side knocked out the holders in the last round, but the manager conceded it will count for little in the quarter-final ...
© Copyright 2020 - reporter.am