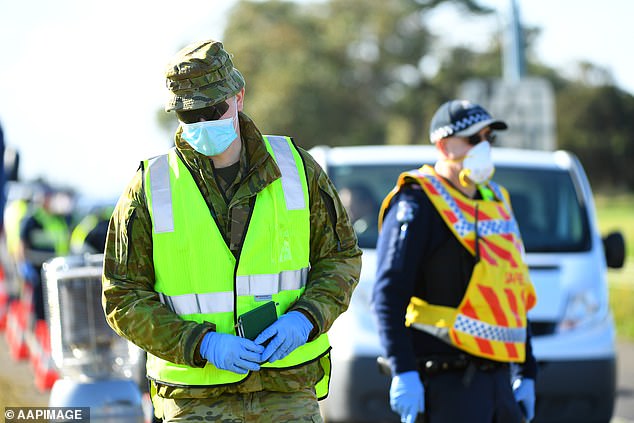 Victoria has recorded almost 238 new cases of coronavirus in the past 24 hours.

There are 105 Victorians in hospital with 27 fighting for their lives.

A woman in her 90s with the virus has died overnight, meaning three people have lost their lives to the disease in Melbourne since yesterday.

Meanwhile, New South Wales has recorded 13 new cases, with 10 linked to a cluster which developed at the Crossroads hotel in south-west Sydney.

There are now 40 cases linked to a pub.

Anyone who attended the hotel in Casula between July 3 and 10 must get tested for coronavirus and self-isolate for 14 days even if the result is negative.

Queensland has added the NSW cities of Campbelltown and Liverpool to its list of coronavirus hotspots, meaning anyone from there must spend 14 days in hotel quarantine if they want to enter the northern state.

Federal Health Minister Greg Hunt has warned there will be more deaths from coronavirus.

Mr Hunt told the ABC that Australia would have to cut itself off from the outside world if it hoped to eliminate the coronavirus.

‘That would mean obviously no gatherings, no protests, no trade, no returnees from overseas, no family reunions.’

Prime Minister Scott Morrison has warned attempting to eliminate the coronavirus would destroy the Australian economy.

The prime minister is instead persevering with a suppression strategy, as authorities attempt to tame rising infection rates in Victoria and NSW.

Mr Morrison says the strategy relies on the strength of state and territory health systems, and their ability to track and trace coronavirus cases, along with adherence to social distancing rules.

‘You don’t just shut the country down because that is not sustainable,’ he told Triple M on Wednesday.

‘You would be doubling unemployment, potentially, and even worse. The cure would be worse than what arguably wouldn’t be delivered anyway.’

Mr Morrison pointed out an ongoing Victorian outbreak, which has claimed several lives, was sparked by a quarantine breach.

‘Unless we’re going to not allow any freight or any medical supplies into Australia, or not allow any exports or anything like this, there is always going to be a connection between Australia and the rest of the world,’ he said.

‘The right strategy is the one that we have all together been pursuing as a country, and the national cabinet has been very important to ensure everyone is moving in the same direction.’

The prime minister confirmed a NSW coronavirus cluster, which has triggered a backlash in Queensland and South Australia, came from Victoria.

‘He’s not ruling anything out, which is understandable in the circumstances,’ Mr Morrison said.

Price: (as of - Details) EXPLORE. DISCOVER. CREATE. TOGETHER. LEGO Worlds is an open environment of procedurally-generated Worlds made entirely of LEGO bricks...

OMAHA,Neb (WOWT) -A dog owner is now cautioning others after he states his dog got captured on an exposed pipe at an...

Wallace, the only fulltime African-American driver in the Cup Series, still has to decide whether he will remain with Richard Petty Motorsports...

China is years ahead of the U.S. on digital finance. Here’s why it matters.

It’s hard to imagine a time when paper money was innovative. Those crimped and crumpled bills pressed in your wallet seem so stale today....