A University of Westminster student who ran away to join ISIS died while being held in prison in Syria.

Ishak Mostefaoui, who travelled to Syria in 2014 and had his British citizenship revoked, is said to have died while trying to escape custody in the united states.

The 27-year-old, originally from east London, died amid serious disorder in a jail in Hassakeh, which holds ISIS prisoners from around the globe.

Mostefaoui was captured in Syria last year and held in a prison in north-east of the country controlled by the US-backed, Kurdish-led Syrian Democratic Forces.

Former University of Westminster student Ishak Mostefaoui, 27, has died in prison in Syria after reportedly trying to escape having fled the UK to join ISIS in 2014 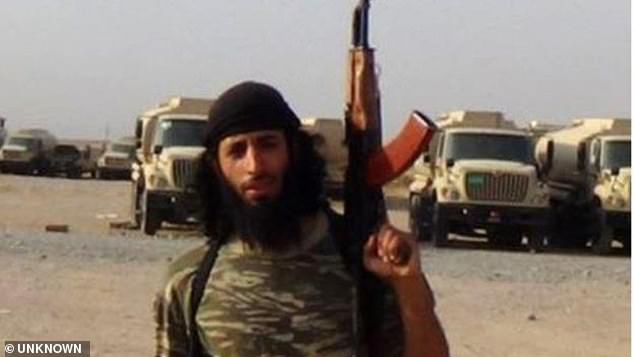 Mohammed Emwazi – Jihadi John – was also a Westminster student. He appeared in videos in which that he killed Western hostages before being killed in an airstrike

The former student was one of as much as nine University of Westminster students to fight for ISIS.

Fellow student Zakariyya Elogbani abandoned his business management degree at the University of Westminster to join the jihadis in 2014.

Mostefaoui was one of 10 British men and 30 British women being held by the Syrian Democratic Forces.

Ishak Mostefaoui may have been radicalised in 2013 and travelled to Syria with Elogbani. He had his British citizenship revoked for ISIS activities in 2018.

Zakariyya Elogbani studied at Westminster in 2013 but left for Syria in 2014. He was detained there last year.

Mohammed Emwazi, known as Jihadi John, graduated in 2009. He killed Western captives on film for ISIS and was killed in 2015.

Elogbani gave the BBC noms de guerres of another three fellow students he said had been killed fighting for ISIS. The BBC identified one as Qasim Abukar, a hardened jihadist who previously fought with a militant group in Somalia.

His brother Makhzumi Abukar was jailed for a million-pound fraud which was linked to the terror group, police believe.

Akram Sabah left the university in 2011. He and his brother were killed in fighting in September 2013.

Mohamed Jakir, a jihadi killed in Syria in 2014 after seven weeks in country, was also reportedly a Westminster University student.

The prison he occured in, that was a converted school, has experienced a few riots this season.

All travel to Syria has been advised against by the Foreign Office, according to the Government

A Government spokesperson told the BBC: ‘Those who chose to leave the united kingdom and fight for, or support, Daesh potentially pose a very serious national threat to security.’

Mostefaoui’s father Abderrahmane said his family came to London when his son was five and that the household opposed extremism.

He was a popular, football-loving boy radicalised, his father believes, by people at University of Westminster in around 2013.

In April 2014, Mostefaoui said he was going to Amsterdam for a couple days.

Then they heard nothing for per month before that he called to say that he was in Syria.

His father ‘collapsed’ when he heard the news.

Mostefaoui is among those ISIS fighters to have had his citizenship removed.

In January 2019, his wife and young son died, and that he was defectively injured, when his house was bombed.

He was being held in detention before his death.

Of around 900 people who have gone the UK for Syria to join violent Islamist groups, 20 percent have died, 40 percent have came back to the united kingdom, and 40 per cent continue to be in the spot, according to ministers.

A University of Westminster spokeswoman told MailOnline this past year: ‘The University takes its responsibility in relation to safeguarding and to the development of positive global citizens very seriously.

She said the report noted that: ‘Most of what the Panel heard and saw was most heartening.

‘Like the Security Services, the Panel found no evidence at all to support journalistic claims that the University of Westminster was a breeding-ground for extremism’.

She added where in actuality the panel did highlight points for action, the University took steps to address these in line with its ‘absolute priority to safeguard its community’.

She said: ‘As a University that has wellbeing at its heart, Westminster features a strong pastoral and interfaith focus providing care and support to its community of 20,000 students from significantly more than 150 countries.’

Fareed Zakaria: Why Trump changed his tune on China