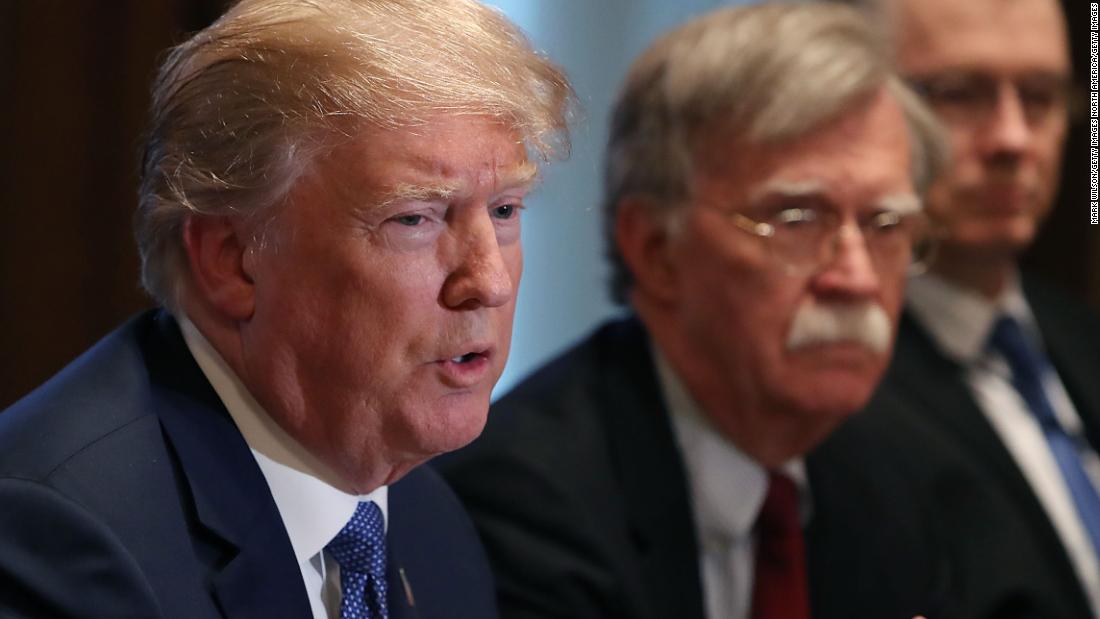 “To be clear: Defendant’s manuscript still contains classified information,” Justice Department lawyers wrote on Wednesday. “This means it contains instances of information that, if disclosed, reasonably could be expected to cause serious damage, or exceptionally grave damage, to the national security of the United States.”

If it wins the court order over Bolton ahead of the book’s release date of June 23, the Trump administration also believes the judge should prevent Bolton’s publisher and commercial book resellers from distributing the book to the public.

Even with the court action, the book’s contents have previously become public.

On Wednesday, a few major news organizations, including CNN, obtained copies of the book and published articles about Bolton’s revelations of Trump’s behavior, including the President’s encouragement of foreign leaders — including China’s President — to help him in the 2020 election.

“You can’t put the genie back in the bottle,” said Brad Moss, a lawyer who’s handled a few pre-publication book review matters, on Wednesday.

The administration also offers claimed in court Bolton didn’t obtain the administration’s sign off to publish his book, in breach of his employment contract with the government. In addition to the emergency order, the Justice Department is asking a federal judge to award them Bolton’s earnings on the book — a sort of recourse that courts have allowed.

But Bolton’s lawyer has said he diligently went through the administration’s book review process, took care to avoid revealing classified details and was told the process was complete.

Halting publisher and booksellers, too

The Justice Department outlined why it believed the court could stop Bolton as well as his publisher, Simon & Schuster, and book resellers from making copies of the book, titled “The Room Where It Happened,” available to the general public.

The request underscored just how extreme an approach the administration is taking to stop Bolton’s book. From the Pentagon Papers on, the US Supreme Court has firmly sided with allowing the publication of leaked classified national security information under the First Amendment, and courts generally speaking do not stop publishers.

“If this Court enjoins Defendant from distributing his book until he receives written authorization after the conclusion of the government’s prepublication review, then that injunction should also bind his publisher, Simon & Schuster,” the Justice Department wrote, explaining its request. “Commercial resellers further down the distribution chain, such as booksellers, likewise, would be subject to the injunction … once they have actual notice of it, as Simon & Schuster does.”

The publisher Simon & Schuster and booksellers have not been sued by the Department of Justice.

The publisher, free speech advocates and lawyers hit back nearly immediately at the attempt to stop the book.

“This filing is a frivolous, politically motivated exercise in futility. Hundreds of thousands of copies of the book have already been distributed around the country and the world. The injunction as requested by the government would accomplish nothing,” Adam Rothberg, a spokesman for Simon & Schuster, said Wednesday.

Jameel Jaffer, director of the Knight First Amendment Institute, wrote on Twitter Wednesday that the Justice Department’s requests in court of Simon & Schuster and booksellers “are far broader than the one the Supreme Court declined to grant in the Pentagon Papers case.”

In the Pentagon Papers case, the Supreme Court ruled against the Nixon administration and allowed the New York Times and Washington Post to publish classified Defense Department details about the US in Vietnam, a historic decision guarding the freedom of speech and of the press.

In its court filing Wednesday, the Justice Department compares Bolton’s disclosure of information to that of Snowden, who disclosed the existence of surveillance programs to news outlets.

The government has rarely been successful in stopping a book with classified information from escaping .. In 2010, the Pentagon spent $47,000 to buy a whole first print run of a book about the Defense Intelligence Agency in Afghanistan.

In one 1979 court case, a judge stopped a magazine from publishing a write-up about how to make a hydrogen bomb — because if the secret was out, it could kill all of humanity.

“A mistake in ruling against the United States could pave the way for thermonuclear annihilation for us all,” the judge if so wrote.

But the H-bomb secret was, none the less, eventually published.

Simon & Schuster reportedly paid about $2 million for the rights to Bolton’s book, and it has already been a best-seller in pre-orders.

Intelligence officials line up against Bolton

The Justice Department included five top officials’ sworn statements about the book’s classified information with its requests on Wednesday, amounting to an extraordinary level of firepower in the court filing.

It’s unusual in court with this many officials, at these high-ranking levels and in so many different agencies, to submit affidavits like they have in this instance.

In addition to the publicly filed statements, the Justice Department confidentially gave the court Ellis’ and Nakasone’s descriptions of the allegedly classified parts of the book.

“It is my opinion that these passages of the manuscript, if made public, will damage national security,” Ratcliffe wrote, according to the public filing.

“It is my judgment that the information contained in the passages I have reviewed is precisely what foreign adversaries’ intelligence services seek to target and collect,” Evanina wrote.

Nakasone wrote part of what Bolton discloses could endangered a signals intelligence source. He had reviewed part of Bolton’s draft manuscript at the request of a National Security Council legal adviser, he wrote.

Bolton sharing the important points could help foreign adversaries cause “serious, and sometimes grave, damage to our national and economic security,” Evanina added.

Ratcliffe defended his declaration in the case in a subsequent statement his office released Wednesday night.

“As the Director of National Intelligence, I am authorized and obligated by law to protect the critical work of the Intelligence Community from any and all unauthorized disclosures, which is what I have done today,” he said.

The Justice Department also hinted at the chance of a criminal investigation related to Bolton’s unauthorized disclosure.

“The criminal penalties associated with unauthorized disclosure of classified information underscore the seriousness of the Defendant’s commitments,” they wrote Wednesday.

And the filing nodded toward a hope of finishing Bolton’s book review. “Only by completing the review process can the Government ensure that any personal benefits Defendant hopes to reap from this writing will not come at the expense of the national security,” administration solicitors wrote.

What’s next in court

The court case adds an additional dimension to an already intense political fight — between Trump and his critics in the Republican Party since the election nears and with congressional Democrats, who’re still wounded after Bolton refused to testify all through Trump’s House impeachment proceedings.

Lamberth, the federal judge assigned to the case, is famous for his bold independence and previously has erred on the side of government transparency. He could take the lawsuit in many directions. He could hold a hearing and ask more questions of the US government. Or the judge could do nothing with real effect ahead of the book’s official release date.

However, Bolton may possibly still stand to lose thousands, or even millions.

“It’s almost a certainty” that the US government could seize Bolton’s proceeds — including related movie or TELEVISION deals — if that he didn’t get proper sign-off, Moss, the pre-publication review lawyer, said. But the last-minute attempt in court to stop the book’s publication is “little more than a futile endeavor to soothe the ego of the President,” that he added.

The filing asks for a court hearing about Bolton’s book this Friday — four days ahead of the scheduled release.

Bolton hadn’t formally responded to the Justice Department’s allegations in court as of Wednesday. Neither had the judge.

Price: (as of - Details) Sunny Health & Fitness presents our brand new motorized Treadmill. If you have no time to go the...

“Democrats have compromised. Repeatedly, we have made clear to the administration that we are willing to come down $1 trillion if they will...

Check out some wonderful Playdate game demos, including a low-fi Doom

Playdate, the tiny yellow handheld game console from software developer and indie game publisher Panic, is still in the works without a...
© Copyright 2020 - reporter.am