The BBC is at the centre of a racism storm today after airing a podcast where a presenter asked: ‘How can white women not be Karens?’.

Several MPs have slammed the BBC on social networking for its No Country For Young Women podcast.

In a Twitter preview for the newest episode, presenter Sadia Azmat asked: ‘How can white women not be Karens?’

She was joined by Chicken Shop Date CEO Amelia Dimoldenberg and historian Dr Charlotte Riley for the 40-minute discussion which, according to the BBC Sounds web site, looked at diversity, stereotypes and feminism, and explored the ”historic context for Karens”.

The term ‘Karen’ is an ever more popular reference to a middle-aged white woman who displays bigoted or racist behaviour.

In the segment, Ms Dimoldenberg said: ‘Read some books so you understand the histories of white people and race.’

‘I think most of the time when women are Karens for the reason that they are completely unwilling to accept that their whiteness is a privilege and, you realize, instead they need to be treated in a special way because they are women.

‘I think you have to be ready to think critically about your identity and your privilege.’

Ms Dimoldenberg added: ‘Yeah, and do not be so loud. Stop shouting and prevent attacking black voices. Instead you should be uplifting them.’

However, the clip attracted controversy on social networking and drew the ire of a few Conervative MPs.

Agreeing with him, Mr Bradley added: ‘Absolute joke. Cancelling my TV license. I do not need to pay for this.’ 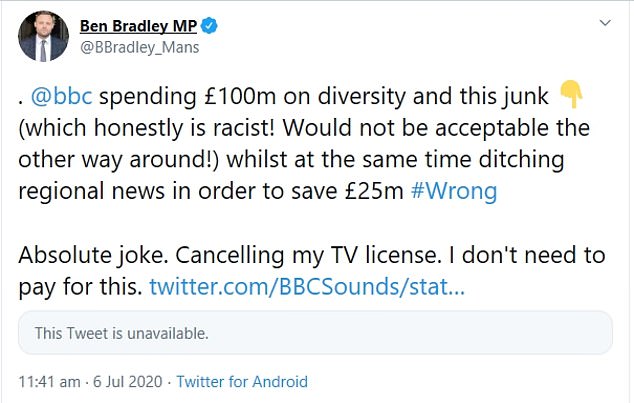 TalkRADIO presenter Julia Hartley-Brewer commented: ‘So I’m a gammon, a boomer and now I’m a Karen too.

‘Another day, another insult. Keep on-going with this and see how well it calculates in the end…’

Maajid Nawaz tweeted: ‘BBC should be ashamed of silencing women by calling them pejoratives

‘If you legitimise ‘Karen’ & ‘Gammon’, it won’t be long before ‘Leeroy’ & ‘Abdul’ become reciprocal insults.

‘Minorities & women have to live with this hateful atmosphere. Bullying is never progressive.’