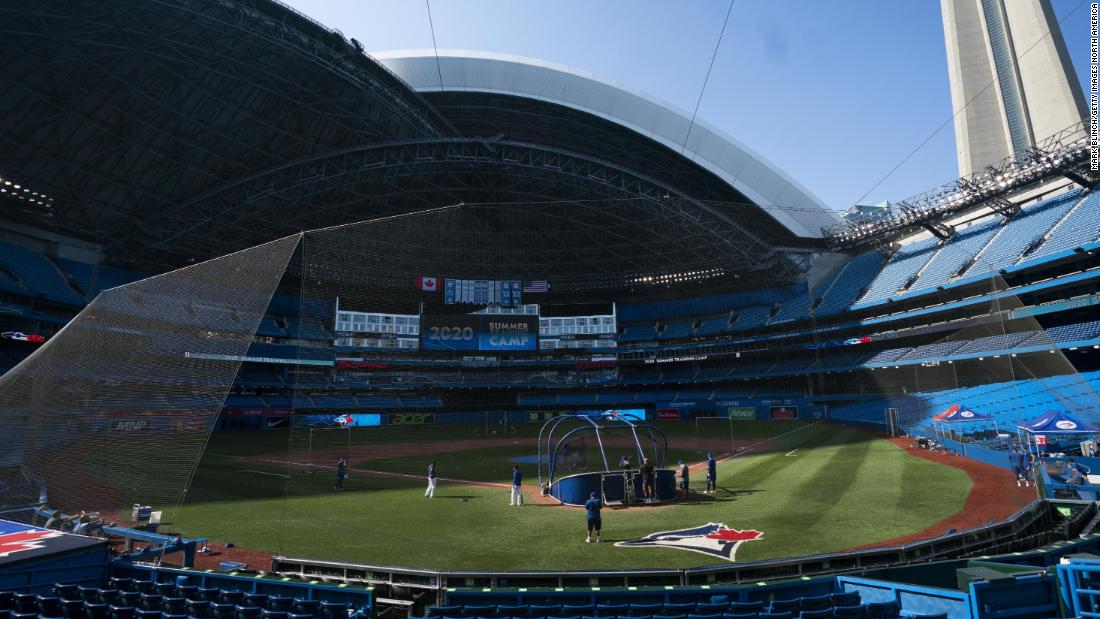 The Blue Jays are seeking an exemption from travel restrictions imposed by the Canadian government to allow the team to play home games at the Rogers Centre in Toronto.

A team spokesperson provided CNN with details of the situation.

Previously, the Blue Jays were able to get an exemption allowing the team to hold summer workouts in Toronto by agreeing to have all players remain in a “modified cohort quarantine” within a footprint that included the Rogers Centre and an adjoining hotel. This essentially eliminated the team’s exposure to the general public.

That exemption only applied to summer workouts, however. The team is working with Canadian authorities on a new exemption under a similar quarantine system that would apply to the MLB regular season. The Blue Jays expect a government decision on the team’s fate by the weekend.

Under Canada’s Quarantine Act, any person entering Canada from the United States is subject to a strict 14-day quarantine. Gatherings of more than 10 people are also prohibited in the city of Toronto. The Blue Jays need permission from city, provincial, and federal governments to circumvent these rules in order to play at the Rogers Centre.

The Blue Jays’ first choice is to play its home games in Toronto. If the Canadian authorities don’t allow this, the team is considering using its Triple-A home in Buffalo, New York, or its Spring Training base in Dunedin, Florida.

A team spokesperson tells CNN the team prefers the Buffalo location due to surging coronavirus cases in Florida.

On Tuesday, Canada’s Deputy Chief Public Health Officer Dr. Howard Njoo indicated that he was skeptical of any plan allowing for the Blue Jays and other MLB teams to travel back and forth between Toronto and the United States where coronavirus is surging, calling it a “totally different ballgame” than the summer workout plan.

As the Blue Jays wait for a decision from Canadian authorities, the team is preparing for exhibition games on July 21 and 22 in Boston against the Red Sox.

If the team hasn’t received a decision from the Canadian government by then, it will have to make its own decision on a non-Toronto location before it travels to play those games, the spokesperson said.

Toronto’s first regular season game is slated for July 24 in Florida against the Tampa Bay Rays. The Blue Jays’ home opener is scheduled for July 29 against the Washington Nationals.

Major League Baseball is planning a 60-game regular season with a normal playoff format to follow.

Decentralized exchanges, likewise called DEXs, have actually increased substantially in appeal given that the start of 2020, with both their user bases and...