A statue of British colonial explorer Francis Light has been vandalised with red paint in a city that he founded in Malaysia.

The monument in George Town, the administrative centre of the former British possession of Penang, is the latest symbol of imperialism to come under attack amid global anti-racism protests set off by the death of George Floyd.

Pictures of the Penang protest were shared by an anonymous sympathiser who branded Light as a ‘coloniser and slave owner’ and said his statue would meet a ‘similar fate to other monuments of its kind across the world’.

Light, a former Royal Navy officer who caused the East India company, acquired Penang as a British naval base in the 18th century and died and is buried there. He left slaves to his partner Martina Rozells in his will. 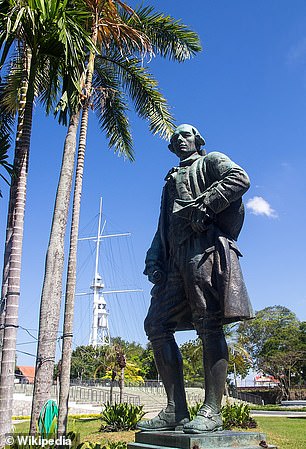 A statue of British colonial explorer Francis Light was vandalised in Malaysia (seen immediately after the protest, and right beforehand) amid global anti-racism protests

Sailor, colonist and slave owner: The life of Francis Light

Born in 1740 and described as ‘something of an imperial adventurer’, Francis Light served in the Royal Navy for four years before switching to merchant shipping and sailing to India in 1765.

By 1771 he had taken command of a merchant vessel and sailed from what is now Malaysia.

The following year, that he wrote to British colonial rulers in Bengal and recommended the Malay kingdom of Kedah as a trading base for the East India Company.

The local sultan, Abdullah, agreed to the British presence in exchange for English support against his regional rivals Siam and Myanmar, the forerunners of Thailand and Burma.

Penang was formally occupied in 1786, providing British forces with a naval base to the east of India. The colonists built Fort Cornwallis to defend against French ships at the height of Britain’s imperial rivalry with France.

Light himself was made superintendent of Penang, which became a booming trading centre and an everyday port of call for merchant shipping coming from India to China.

The capital city was named George Town after King George III and is today a UNESCO World Heritage Site and the third-most populous city in Malaysia. Part of their state is on Penang Island which was then known as Prince of Wales Island.

Light is known to have owned slaves, some of which he’d leave to his partner Martina Rozells when that he died.

According to his last will and testament, his slaves included ‘Caffree’ people of African origin and ‘Batta’ those who may have comes from an island off the coast of Sumatra.

Martina’s back ground is shrouded in mystery, but she is considered to have had both European and Asian heritage, possibly including Portuguese descent.

She was not married to Light – that he referred simply to the woman ‘with whom I’ve long cohabited’  – but their son William Light later achieved his own colonial fame since the first surveyor-general of South Australia and contains his own statue in Adelaide. They had four other children.

Light also corresponded with local rulers about the purchase and sale and slaves along with other commodities such as opium and ammunition.

By 1791, relations with the neighborhood sultan had deteriorated and Light was forced to send for reinforcements from Bengal to place down a rebellion.

Light died of malaria in 1794 and is buried in a Christian cemetery in Penang.

Malaysian media said the statue was found defaced last Tuesday morning and has subsequently been cleaned and remains in place.

‘I was here until Monday about 7pm and it was fine. We came the very next day and found it splashed with red paint,’ a local worker told the New Straits Times.

Local media says red paint is sometimes used as a symbolic warning to debtors, but the vandalism of Light’s statue is thought to have now been a political protest.

The vandals could address five years in prison if they are found and convicted, with police investigating the crime of ‘committing mischief’.

The monument stands at Fort Cornwallis, a niche site in George Town that has been founded by the East India Company and is now billed as a tourist attraction.

The head of a tourist industry group in Penang criticised the protest, saying statues really should not be vandalised any longer than road signs.

The statue has ‘historical significance’ and is a bit of ‘state heritage’, Vergis Mathews of the Malaysian Association of Tour and Travel Agents told local media.

George Town includes hundreds of historic buildings from the colonial era after Penang was occupied by British settlers in 1786.

However, the statue of Light wasn’t put in place until 1936 – some 142 years after he died of malaria and was buried in George Town.

Light was the initial Superintendent of Penang after it was occupied by the British in 1786, who named part of the territory as Prince of Wales Island and the administrative centre city after King George III.

The British sailor had lobbied for the East India Company to simply take possession of Penang, that has been used as a trading post and defensive fort against the French at the height of Britain’s imperial rivalry with France.

Penang became a prosperous trading centre, even though colony’s success angered the neighborhood sultan who launched a failed rebellion against Light’s rule in 1791.

Light’s last will and testament are in a Penang museum and show that he owned a number of slaves, some of which he left to his partner Martina Rozells.

According to his last will and testament, his slaves included ‘Caffree’ people of African origin and ‘Batta’ those who may have comes from an island off the coast of Sumatra.

In 1826, British possessions on the spot including Penang and Singapore were consolidated into the Straits Settlements, initially with George Town as its capital.

The Settlements were brought underneath the control of the India Office in 1858 and were established as a formal Crown Colony in 1867.

After a period of time of Japanese occupation all through World War II, Penang was sooner or later merged in to the Federation of Malaya which gained independence in 1957.

The modern state of Malaysia was formed in 1963 when Malaya merged with neighbouring Sabah, Sarawak and Singapore.

Singapore quit the federation in 1965 after a disagreement with the leaders of other Malaysian states.

Statues of imperialist figures have been toppled around the world in recent weeks amid the global reckoning on racism unleashed by the death of George Floyd. 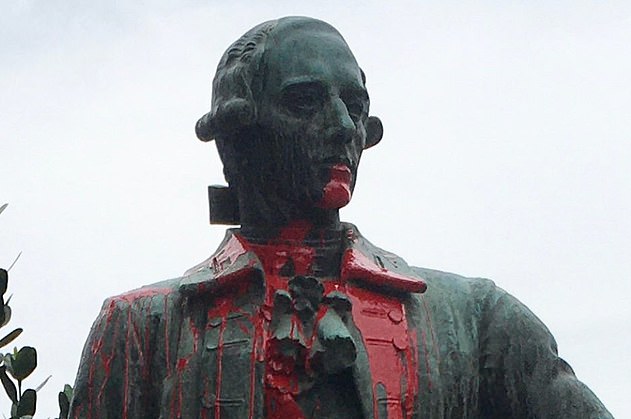 In Australia, a statue of Captain James Cook was defaced last month while a similar monument was vandalised in New Zealand.

The Topple the Racists website describes Cook, who charted the east coast of Australia 250 years back, as ‘a colonialist who murdered Maori people in their homeland’.

In Britain, Middlesbrough mayor Andy Preston said it might be a ‘travesty’ if statues of Cook were taken from display in places such as for instance Great Ayton and Whitby.

Preston called on local politicians to say they might ‘not support the whitewashing of Cook’s name from the history books’, arguing that he was a ‘hero’.

Statues of Christopher Columbus have also been targeted in the United States, where the debate has also centered on Confederate generals of the Civil War era.

In Britain, a statue of slave trader Edward Colston was torn down and thrown into a harbour in Bristol last month.

Meanwhile in Belgium, a statue of King Leopold II was removed in Antwerp amid anger at his brutal rule in the Congo which led to millions of deaths.

In an unprecedented statement, Belgium’s King Philippe expressed deep regret on for the ‘suffering and humiliation’ inflicted on the Congo all through its 75 years under Belgian rule.