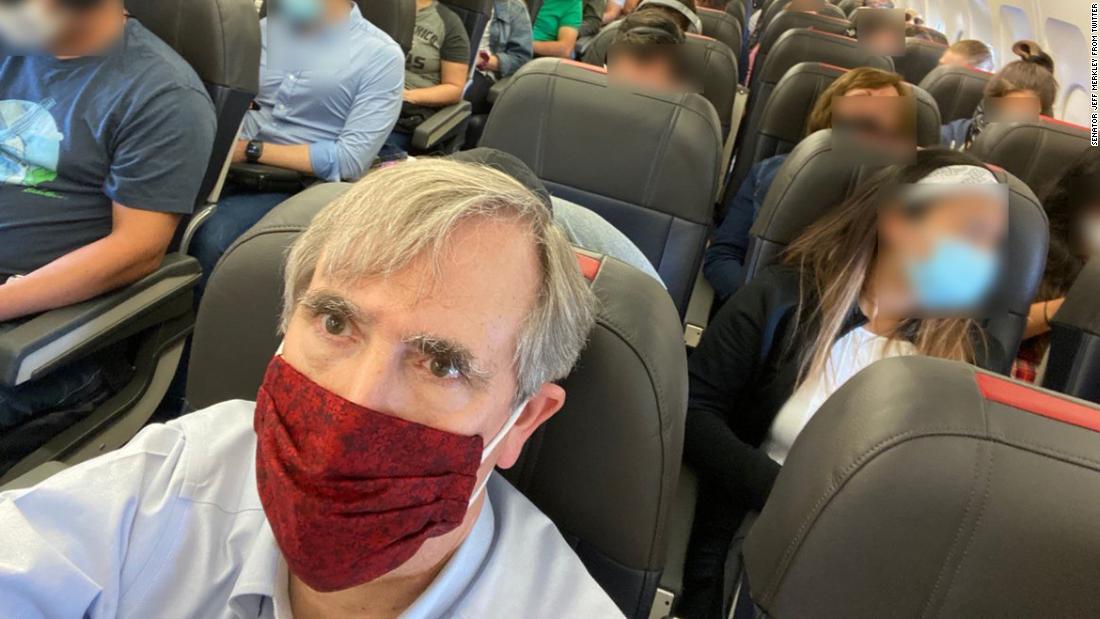 Oregon Sen. Jeff Merkley, a Democrat, tweeted a graphic showing his packed flight on Thursday. Most of the passengers in the photo were blurred out, but it’s clear some were wearing masks and lots of of them were in the middle seat.
“@AmericanAir: how many Americans will die bc you fill middle seats, w/ your customers shoulder to shoulder, hour after hour. This is incredibly irresponsible,” he tweeted. “People eat & drink on planes & must take off masks to do so. No way you aren’t facilitating spread of COVID infections.”

On Friday that he followed up: “A lot of folks reacted to my tweet yesterday about the irresponsible sale of middle seats on planes saying, ‘Wouldn’t it be nice if someone in the Senate did something about it?’ They’re right.”

“I will introduce a bill to ban the sale of middle seats through this pandemic. And I’ll work with colleagues to include it in a package of airline accountability reforms they are crafting,” he tweeted.

American Airlines said in a statement Friday, “We are unwavering in our commitment to the safety and well-being of our customers and team members. We have multiple layers of protection in place for those who fly with us, including required face coverings, enhanced cleaning procedures, and a pre-flight COVID-19 symptom checklist — and we’re providing additional flexibility for customers to change their travel plans, as well.”

It added, “We know our customers are placing their trust in us to make every aspect of their journey safe, and we are committed to doing just that.”

American didn’t directly respond to Merkley’s initial tweet, but it did reply to a Twitter user who retweeted it and said, “The very reason I didn’t fly my family from Texas to Maine. @AmericanAir. this is shameful. I’ve flown with you for years. I will never again.”
“We’ve implemented many layers of protection including enhanced cleaning and requiring face coverings,” the airline replied, linking to a press release that detailed its “clean commitment.”

But Dr. Robert Redfield, director of the US Centers for Disease Control and Prevention, said this week that “there was substantial disappointment with American Airlines” when the air carrier announced it would stop limiting seat sales.

Speaking at a Covid-19-related Senate committee hearing on Tuesday, Redfield said safety on airplanes and mass transportation is just a “critical area.”

“I can tell you that when they announced that the other day, obviously there was substantial disappointment with American Airlines,” Redfield said. “I can say this is under critical review right now by us at CDC. We don’t think it’s the right message.”

The CDC has said that “although illness may occur as a direct result of air travel, it is uncommon.” Most viruses don’t spread easily on airplanes, the agency has said, as a result of how the air circulates and is filtered. Modern commercial jets recirculate 10-50% of the air in the cabin, mixed with outside air.