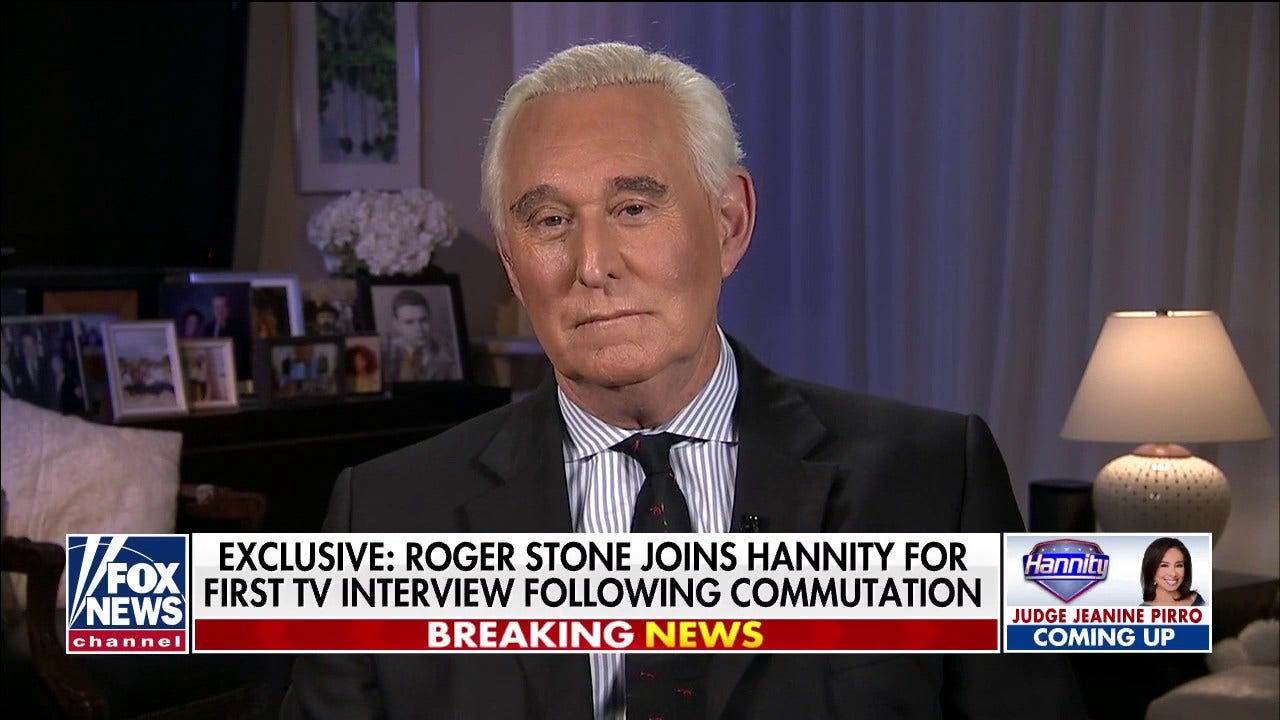 “I had a biased judge. I had a stacked jury. I had a corrupt jury forewoman … my trial was over before it started,” added Stone, referring to U.S. District Judge Amy Berman Jackson and jury forewoman Tomeka Hart, whose history of anti-Trump social media posts came to light earlier this year.

The 67-year-old Stone was due to report to prison Tuesday to begin serving a 40-month sentence. He was convicted in November 2019 on seven counts of obstruction of justice, witness tampering and making false statements to Congress on charges that stemmed from former Special Counsel Robert Mueller’s investigation.

Stone accused Jackson Monday of having “ignored all the legal precedents” in ordering him to prison.

“She ignored my health conditions, she ignored the conditions at the prison at that time, and she ignored the current policies of DOJ [Justice Department] and the BOP [Bureau of Prisons],” he said. “Now, you would have thought that that would have been reversed in the [D.C.] appeals court, but they ruled for her, 3-0. I’m afraid this is a fixed system.

“Above all, though,” Stone continued. “I guess I would have to say the most important thing here is the courageousness of the president’s act. I know there were many, many people who told him in an election year, ‘Don’t do this. Let Roger Stone wait for a pardon after the election.’ Sean, I don’t think I would have lived that long, not with my asthmatic condition. Not with, now 60 COVID-19 cases in that prison.

“So I have deep affection for Donald Trump because I’ve known him 40 years. He’s a man of great justice and fairness. He’s a man of enormous courage. I knew he would take some shots for this, but I think most people, most fair-minded people, understand he saved my life and at least on-paper he gave me a chance to fight for vindication.”

Stone said that he will continue that fight, though he acknowledged that if his conviction is overturned and the government chooses to try him again, the case will be back before Judge Jackson.”So I’ve got to become convinced I can get a fair second trial,” Stone said, “because I certainly didn’t get a fair first trial.”

“He stayed on this case with every twist and turn, wasn’t afraid to take on the judge. He’s a man of incredible loyalty and he’s a great friend. He may be the best friend a man can have, so my hat’s off to him and also congressman Matt Gaetz from Florida who I hope to live long enough to see in the White House,” he said.

Stone also responded to critics who claimed, in his words, that he had “traded his silence for a commutation.”

“There was no circumstance under which I would bear false witness against the president,” he said. “I was just not willing to lie … What I said has been consistent, that I would not lie against my friend of 40 years so they could use it for impeachment.”

Say hello to a new theropod dinosaur species, Vectaerovenator inopinatus. Discovered after a series of serendipitous fossil finds on the Isle of Wight in...

The cancellation of the fall season promises to wallop businesses who count on those fall weekends for survival, and the economic impact likely will...

Well this is a bit of an unexpected crossover! On Thursday night’s episode of Real Housewives of New York, a girls’ trip in Mexico turned...

Epic Games CEO Tim Sweeney has issued a series of public comments on his personal Twitter account regarding the legal fight the...

"President Trump and Melania Trump have both requested their mail-in ballots. They were sent in the mail to the first family yesterday, per the...

‘It was fun beating Messi’ – Bayern star Goretzka has no sympathy for Barcelona...

The Bavarian midfielder sunk the boot into the Argentine legend as the Germans development into the competitors's semi finals Bayern star...
© Copyright 2020 - reporter.am