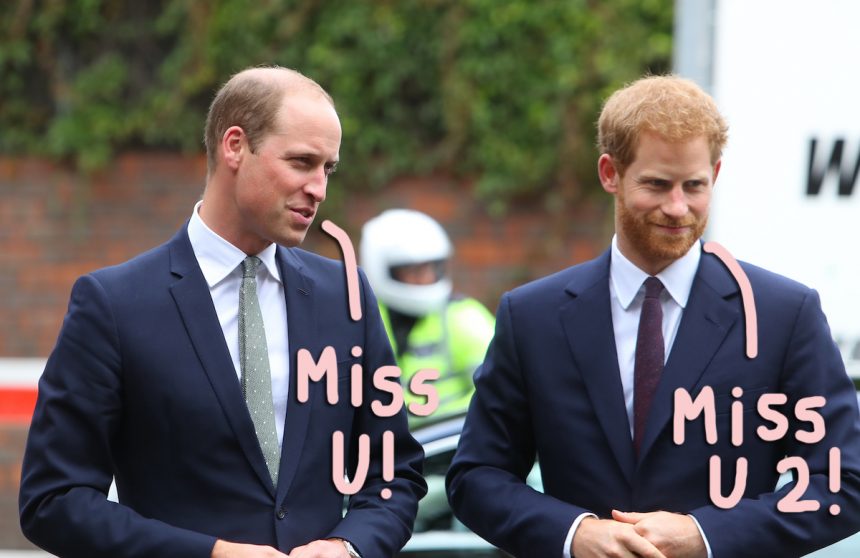 Prince Harry is in a long distance relationship… with Prince William! LOLz!

It’s been a few months now since the royal brothers have been able to see each other in person, but regular Zoom dates without their wives have been a great way for them to stay up-to-date on each other, says an insider.

Related: William And Harry Team Up To Thank Volunteers For Princess Diana’s Charity

Despite an eight-hour time difference, the future King of England has been keeping “tabs” on his little brother via video chat, an insider tells Fabulous Digital:

“William finds Zoom a good, informal way of keeping in touch, and some would say ‘tabs’, on his younger brother. There have been several zoom calls. It’s easy to set up and involves no awkward scheduling.”

Typically, these check-ins take place in the evening for William, after Prince George, Princess Charlotte, and Prince Louis have turned in for the evening, and he’s had dinner with Kate Middleton. Over in El Lay, it’s typically mid-day for Archie Harrison‘s dad. The source continued:

“After the children have gone to bed and supper with Kate. It has been only William and Harry. It is around lunchtime in LA. These calls are made from Anmer’s private sitting room. It’s not the room that Kate and William use for their public zoom sessions.”

Sounds like they’re getting in some great quality time, and we love to see it! A friend close to the brothers added:

“William is very anxious to keep the calls low key and casual. Just two brothers have a chat. No-one else is involved. It takes the pressure off. There is nothing formal about these zoom sessions. It’s about keeping in touch that’s important. Harry has spoken on Zoom to the Queen as well.”

As we know, there have been reports of drama plaguing the Sussexes and Cambridges for over two years now, and things haven’t exactly eased up because of Megxit or the pandemic! Aside from just chatting with each other, both William and Harry have been speaking to numerous organizations they work with and support via video call while observing lockdown — as have their wives of course.

A confidant shared with the outlet:

“William comes over well on zoom. Some people just don’t like looking at themselves on screen. But William looks calm and collected and actually listens to what’s being said to him.”

All the makings of a future King!

Any thoughts, Perezcious readers?? Let us know (below) in the comments!!

Ellen Pompeo Shares Her HILARIOUSLY Relatable Reason For Staying On Grey’s Anatomy For So Long!

Price: (as of - Details) Built for room-scale VR: explore the transcorp offices how you see Fit and find your way to SafetyCritically...

The Bank of England on Thursday held interest rates steady and preserved its current level of possession purchases, as financiers expected indications that...

Our Oppo Reno4 Pro video review is out

The Oppo Reno4 Pro revealed for the international markets recently went on sale in India the other day. The worldwide variation is various...

Rory McIlroy has not paid a greens fee in a very, very long time

Rory McIlroy has played a few of the world's finest golf courses. But when's the last time he's paid to play? With today's PGA...

Events this year were downsized due to the fact that of the pandemic. Bells have actually tolled in Hiroshima, Japan, to mark the 75...
© Copyright 2020 - reporter.am