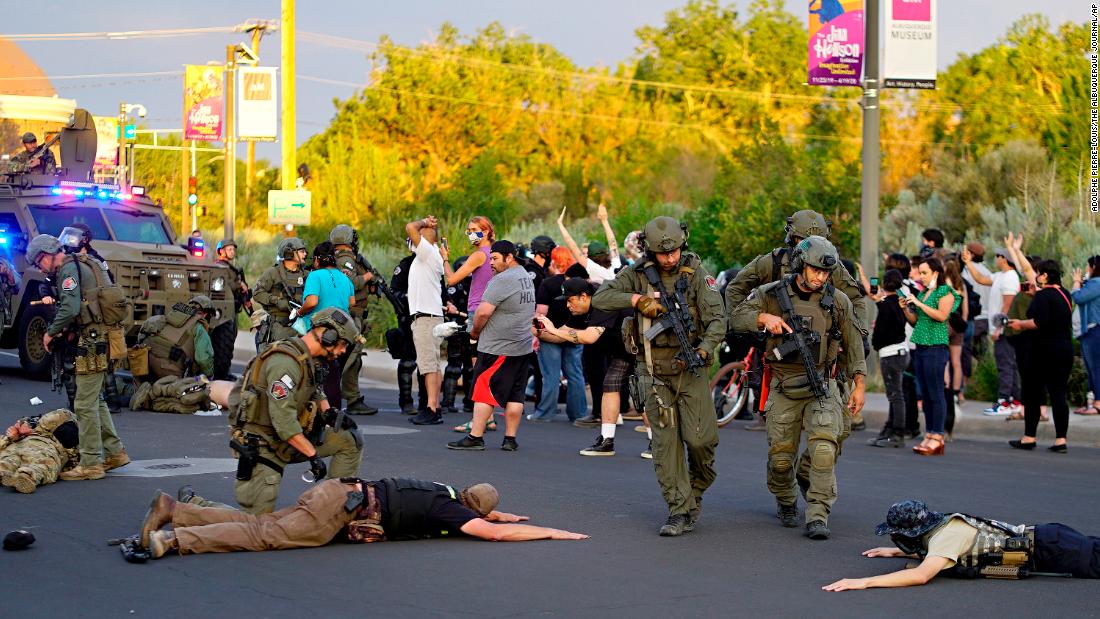 “One of the key principles in our democratic system is that only those recognized, trained and licensed by the government may engage in this kind of [law enforcement] activity,” Torrez said at a press conference announcing the civil action.

In a 39-page civil complaint, Torrez accused the New Mexico Civil Guard of being a “vigilante” paramilitary outfit that engages in policing activities in violation of state law.

Armed members of the militia were at a June protest in Albuquerque, opposing the removal of a statue of a Spanish conquistador. Violence during the protest led to a shooting that left one person wounded. The militia group says the suspect is not a member.

“NMCG’s coordinated, armed, and uniformed presence at public events results in intimidation and creates a chilling effect on the exercise of First Amendment rights,” the lawsuit alleges.

After the lawsuit was announced, the New Mexico Civil Guard posted a response on its Facebook page, calling it “laughable that they are trying to say we impersonate officers. The NMCG has always said we are the militia we are not police and do not enforce laws and we call the police officers when a crime is committed.”

The militia insisted politics were behind the lawsuit, adding, “If they pass this through the courts they can go after any gun club, any group that they disagree with who slides (sic) any training or has any dissenting political opinion. PEOPLE WAKE UP!!!!!”

In the Facebook response to the government’s lawsuit, the New Mexico Civil Guard did not address the allegation that some of the group’s members have connections to those associated with white supremacy. CNN reached out Tuesday to the group for comment.

In the civil lawsuit, the district attorney claims the militia’s actions at demonstrations may cause local citizens to incorrectly infer the armed group has police powers and creates additional problems for law enforcement officers trying to keep the peace.

“By appearing armed and uniformed at such events, NMCG creates a risk that its members will be mistaken for authorized police or military personnel, confusing members of the public and complicating the efforts of law enforcement to respond to any unrest that arises at those events,” according to the lawsuit.

“Law enforcement must also take into account the risk of triggering violence on NMCG’s part when determining whether and how to intervene in any disturbances that occur at public gatherings attended by the group.”

The New Mexico Civil Guard made national headlines at one of several protests that erupted across the nation following the death of George Floyd at the hands of police in Minneapolis.

On June 15, demonstrators supporting racial justice gathered in Albuquerque near a statue of controversial conquistador Juan de Oñate, demanding its removal. Oñate led a massacre of 800 to 1,000 Acoma Pueblo Indians, after which he cut a foot off some survivors and sold some into slavery.

Also in attendance were members of the New Mexico Civil Guard, whose mission is to “provide rapid local lawful response to emergency and dangerous situations,” according to the group’s Facebook page.

In a criminal complaint, police say 31-year-old Steven Ray Baca opened fire on demonstrators following a physical altercation, injuring one of the protesters. Baca was charged Monday with aggravated battery with a deadly weapon.

Baca’s attorney, Jason Bowles, has said his client was acting in self-defense. He said Baca was trying to disengage as one person attacked him with a skateboard and another man came at him with two knives.

According to a criminal complaint from Albuquerque police, cell phone footage recorded by a bystander shows a man in a blue shirt, later identified as Baca, appearing to protect the statue. The complaint says Baca eventually left the area of the statue but was pursued by some people from the crowd.

Although the militia group denies Baca was a member, the incident sparked widespread outrage and condemnation from local leaders, who accused the militia of inciting violence.

“There is absolutely no space in New Mexico for any violent would-be ‘militia’ seeking to terrorize New Mexicans,” Gov. Michelle Lujan Grisham said immediately following the incident. “The instigators this evening will be rooted out, they will be investigated, and they will be held accountable to the fullest extent of the law.”
The lawsuit filed on Monday is a unique endeavor by the district attorney, who has joined with Georgetown University’s Institute for Constitutional Advocacy and Protection to sue in order to stop the New Mexico Civil Guard from engaging in law enforcement activities prosecutors say can only be authorized by the governor.

“Private militia activity at public rallies poses a threat both to public safety and to free expression — and it violates laws in every state in the country,” said Joshua Geltzer, the institute’s executive director, in an interview with CNN.

“This case shows a district attorney using the laws available to him to protect his community and safeguard free speech, and doing so creatively through a civil suit based on his authority under state law — and we’re proud to team up with him in the effort,” Geltzer said.

In its Facebook post responding to the lawsuit, the militia group warned the new civil action will have legal consequences beyond their organization.

“This is not just about the Civil Guard this is going to be turned into case law that will be used to beat down anyone who disagrees with a parties views and every constitutional citizens militia,” the group wrote.

In addition to the state’s civil lawsuit, US Sen. Martin Heinrich (D-New Mexico) has called for federal prosecutors at the US Justice Department to investigate the June shooting in Albuquerque.

“This is not the first report of heavily armed civilian militias appearing at protests around New Mexico in recent weeks,” Heinrich said last month. “These extremists cannot be allowed to silence peaceful protests or inflict violence.”