‘Trust me, you wouldn’t eat it!’ Muslim housing commission resident trapped in Melbourne’s misery towers complains the food she gets isn’t halal

A Muslim woman locked up in among Melbourne’s nine public housing towers says she was not able to eat the food delivered to her door as she did not know if it was halal.

TikTok user Dekaspammmm has shared a series of videos detailing her experience of being confined to her unit while Melbourne battles another wave of coronavirus infections.

‘On the first day we received some bread and this thing,’ she said in the footage, alongside an image of the meal.

‘Trust me you wouldn’t eat it if you could afford your own personal food. 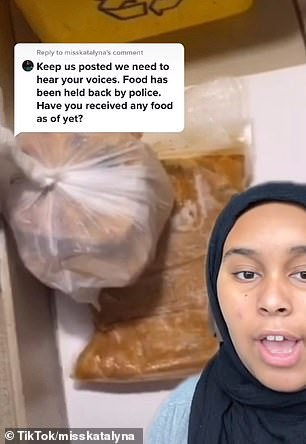 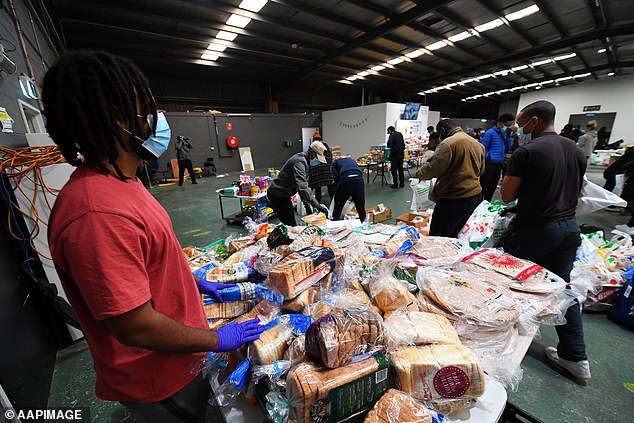 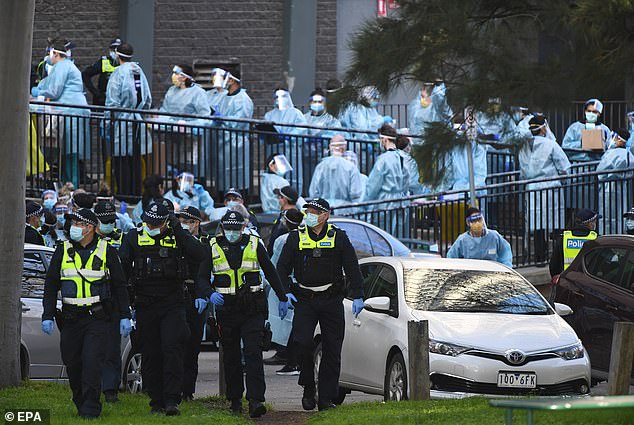 ‘I’m Muslim, I’ve a diet. I cannot eat any food that is not halal. How am I supposed to know what’s gone into that?’

‘And even if it absolutely was halal, I don’t think I’d eat that honestly, specially when I can afford my own food.’

The nine public housing towers in North Melbourne and Flemington were put into immediate lockdown on Saturday afternoon.

Three thousand people will remain in hard lockdown until all residents are tested for COVID-19 and the results are evaluated.

The tower’s lockdown order is for 14 days, but Premier Daniel Andrews hoped to finish it in five.

However the residents may also have to endure the newly announced six-week, stage three lockdown with the rest of the city.

The TikTok user said Australians interested in supporting residents stuck in the towers could subscribe to the local mosque, the Australian Muslim Social Services Agency (AMSSA). 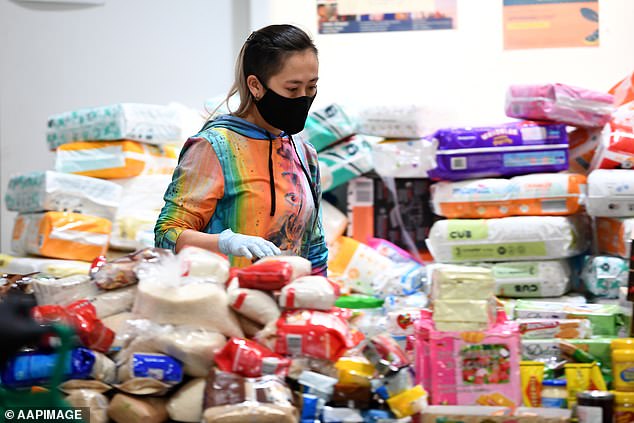 A woman in face mask is observed with donations for the 3,000 residents in nine public housing towers 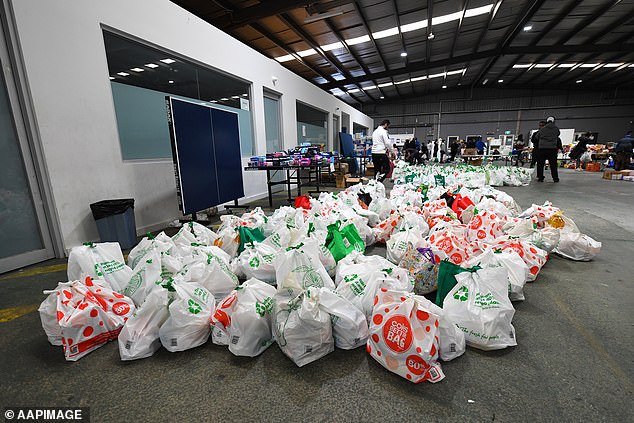 She said AMSSA had been attempting to drop off the grocery donations where possible but there had been difficulties.

The donations are separate to food given by the government.

‘I do not want to sound rude but we have money guys, that is not the problem here,’ Dekaspammmm said in another video.

‘It’s the fact we’re locked up inside and we are banned to buy you know. I appreciate everybody saying ”we will try to have this to you”.

‘AMSSA have so many supplies today but the problem is it is not getting to us.

‘It’s not coming the building. The police say speak to the DHHS and the DHHS say talk to the authorities so it’s actually just a case of how can it be going to arrive at us.’ 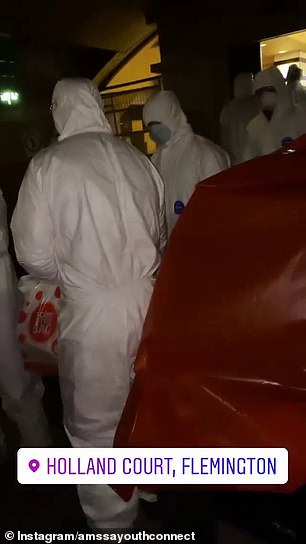 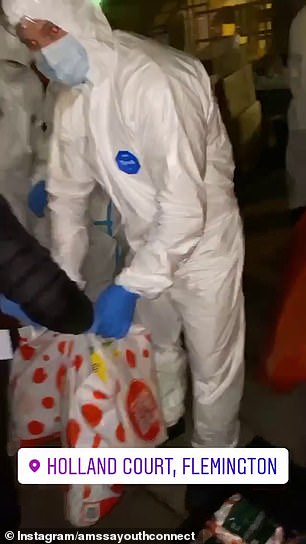 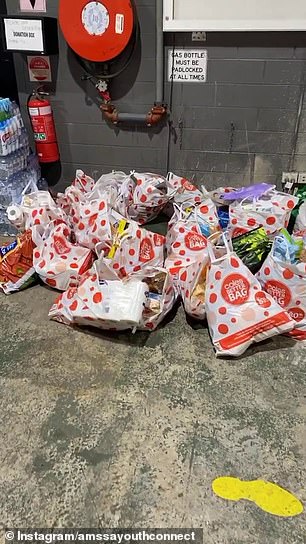 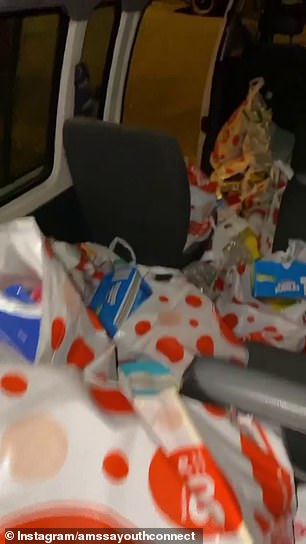 TikTok user Dekaspammmm said Australians interested in supporting residents stuck in the towers could donate to the area mosque, Australian Muslim Social Services Agency. She said AMSSA have been trying to fall off the grocery donations where possible but there have been difficulties

On Tuesday night AMSSA shared Instagram stories while they prepared to deliver supplies to at least one of the towers.

‘After being denied so many times we finally fought to get the food in to 12 Holland Court, Flemington,’ one video was captioned.

‘So glad the residents may have something to consume tonight.’

AMSSA said they were holding off on supplies donations from Wednesday.

‘We’ve stopped taking in new donations as a result of space capacity,’ they wrote on Facebook.

‘Thank you very much for the support.’

Dekaspammmm said it was ‘unacceptable’ she wasn’t allowed to buy her own groceries while confined to her high-rise building.

Mr Andrews said on Wednesday there were 75 COVID-19 cases in total at the nine public housing towers. 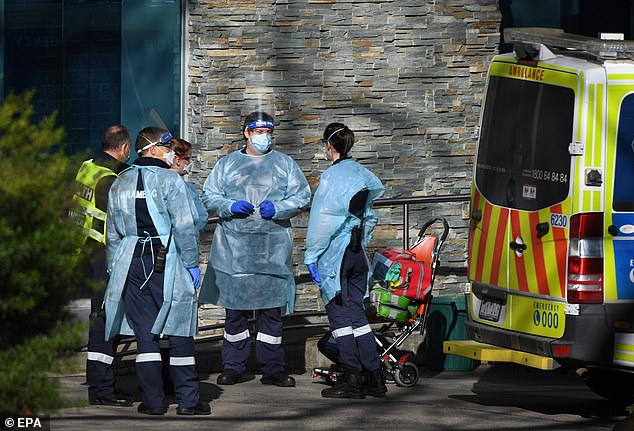 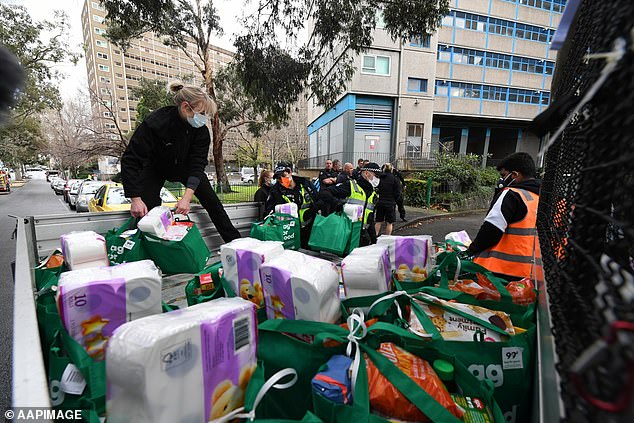 Pictured: People unload food and provisions from the rear of a ute which is distributed by firefighters throughout a public housing tower in North Melbourne on Tuesday

Nokia 3.1 Plus gets Android 10 update with April security patch

“Any effort to undermine him is not going to be productive”

OnePlus Launcher will show Google Discover, not Shelf, on the OnePlus 8

Play Fallout 76 for free this weekend

NextGen investing: How millennials are building their portfolios