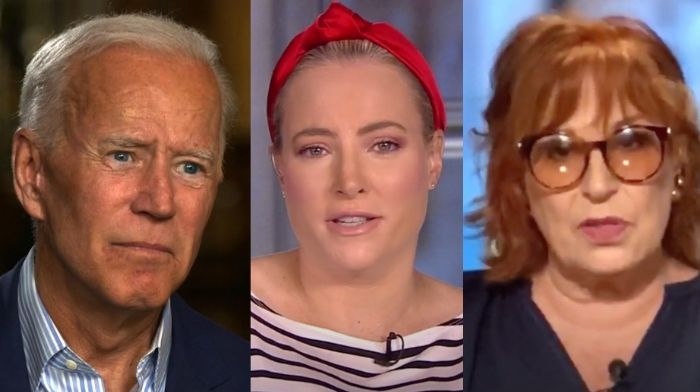 Meghan McCain and Joy Behar are two hosts of the ABC talk show “The View” that rarely agree on such a thing.

That’s why it came as a huge surprise when they teamed up on Thursday to blast Joe Biden for hiding “in his basement” amidst the coronavirus pandemic.

“The narrative that he’s stuck in the basement and he’s scared to come out,” said McCain. “I don’t feel like I’m getting enough from his campaign right now.”

Behar then slightly throttled her usual Trump-bashing approaches to attack Biden for making limited television appearances throughout the COVID-19 pandemic. “Biden needs to be on television more,” the super-liberal Behar said.

“In that case, maybe he can stay in the basement and just talk to us. But he’s going to have to step up, Biden,” she continued.

“We can’t afford the possibility that we don’t have a landslide in the fall. I’m worried about it.”

McCain agreed, saying that while Biden’s basement setup shows he’s “being responsible with the virus,” it has additionally walled him off from the American people.

“While it’s, I’m sure, great for Democrats to see him having a conversation with President Obama, that’s probably going to be a friendly and kind and normal conversation.”

“One way or another, he has got to start hitting President Trump harder,” the conservative added.

“And quite frankly, on some of these issues like the statues coming down and all of the social complications that are going on in the country, I would like to hear more from him.”

“You’re right, Joy, nobody can take anything for granted,” she concluded, marking perhaps the only time she’s ever uttered these words.

This piece was written by PopZette Staff on June 26, 2020. It originally appeared in LifeZette and is employed by permission.