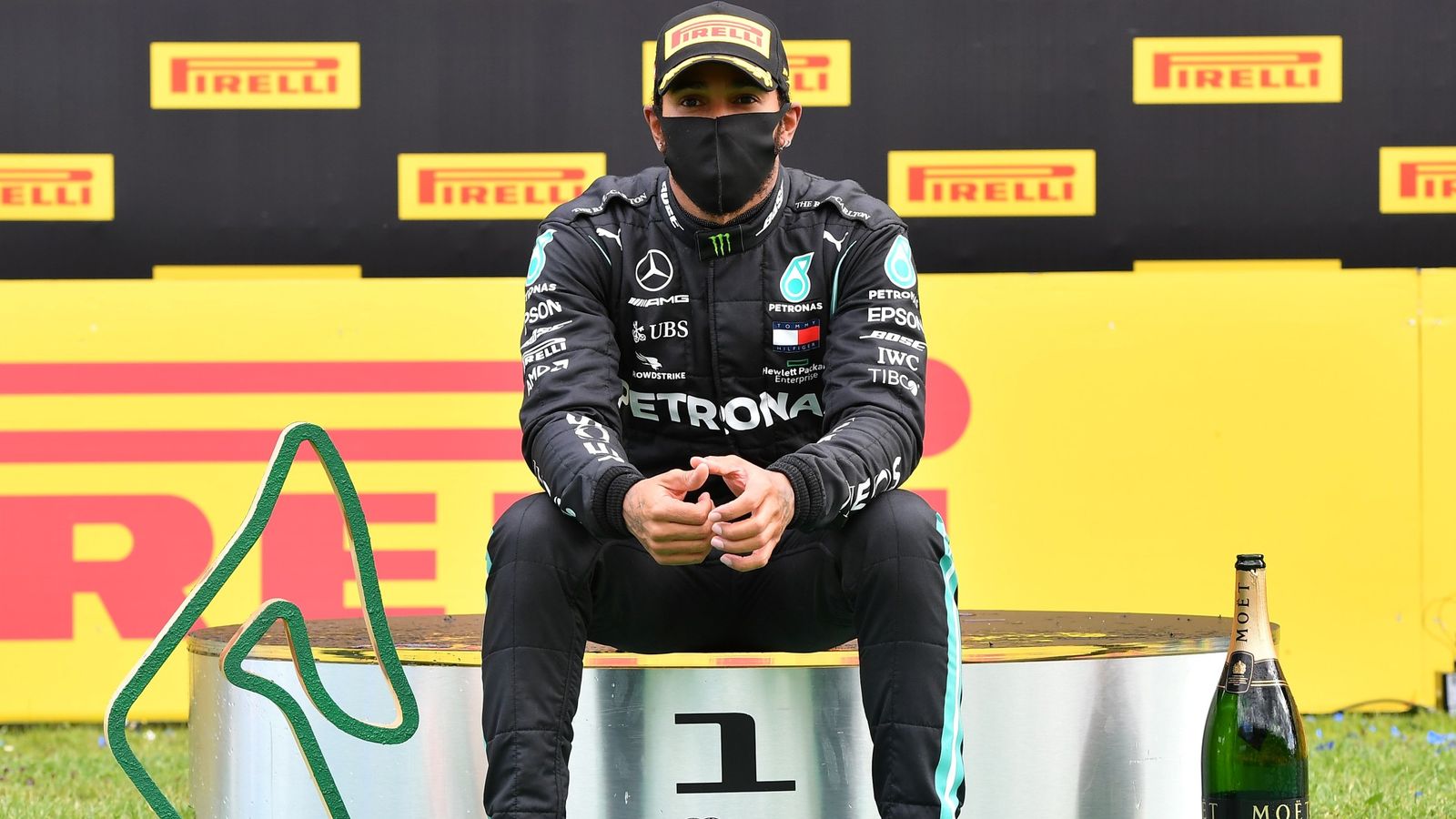 Normal service resumed for Lewis Hamilton to secure his 85th GP victory in Styria on Sunday at an apparent canter, despite calling it one of his ‘weaker’ tracks.

The race had its moments, especially through the midfield, but it couldn’t match the chaos and drama of the first race seven days earlier.

Qualifying, on the other hand, was one of the best I’ve ever commentated on.

Heavy rain was forecast and duly arrived on Saturday morning. Free Practice Three was cancelled and qualifying looked unlikely. Then a weather window appeared and, after a delay, off they went.

Michael Masi, the Race Director, played it very well, the conditions were on the limit but the full hour and all three segments took place with relentless lapping and a timing screen which was a blur of changes.

It was thrilling and a little scary watching the drivers collect up aquaplaning cars at high speed as they applied approaching 1000 bhp of turbo and battery power with great skill. These moments are so important, the drivers looked absolute heroes.

So often we see the very calm onboard camera footage of drivers apparently just stroking the steering wheel from side to side, or endless laps behind a safety car at wet-race starts before the drivers immediately pit for intermediate tyres, all of which gives the impression that many could drive an F1 car. They can’t, only a handful of people in the world can drive such cars to their absolute potential.

Lewis was clearly on a mission. At the first race he achieved neither pole position nor victory, not even a podium or fastest lap despite being in the fastest car. He did though collect three penalties from the stewards and four penalty points on his licence. He put all that right to a large extent with a simply world-class performance to splash his way to pole position by 1.2 seconds.

There were lots of strong performances to create an intriguing grid including Carlos Sainz for McLaren in third, but which also saw Racing Point and Ferrari somewhat lower down than they would have been in the dry. And Max Verstappen and Lewis on the front row which always generates great anticipation.

In the end most drivers got away well at the start and after a few scuffles in turn one headed up to turn three, where Charles Leclerc, starting 14th after a blocking penalty, inexplicably launched his Ferrari into a wedge which included his team-mate three abreast with others.

Both cars were soon out of the race with bodywork damage, giving us a race-long feel of what F1 would look like without Ferrari around.

This is a truly miserable time for the Prancing Horse team. They have clearly lost a significant amount of power since the FIA clamped down in a few areas, and their chassis and aero are not yet fast enough either. To compound that Leclerc and Vettel report the car to be reasonably well balanced, and there’s nothing worse than a racing car which feels ok but is slow. You’d rather have handling issues to hang your hopes on. Let’s hope this track just didn’t suit them.

In this compressed and late-running championship it will be a challenge to sort the car and motor out between now and next season – let alone next weekend. A disgruntled Seb Vettel has already been let go for 2021, and the last thing they needed was an all-red pile-up caused by their future young hope.

As Hamilton controlled the pace out front Verstappen did an admirable job splitting the Mercs in second, and along with championship leader Valtteri Bottas this trio left the field in its distant wake. We were however treated to some feisty action between Carlos Sainz, Lando Norris, Checo Perez, Lance Stroll, Daniel Ricciardo and Esteban Ocon, with team-mates often side by side.

Renault faced the situation where the McLaren-bound Ricciardo really should have been eased by his team-mate, Ocon. Esteban is an impressive fighter, but as with his days at Force India he must realise that working as a team is not a weakness, and certainly a maturity the big teams look for. They were holding each other up in what will likely be a season-long scrap with McLaren and Racing Point.

Renault’s post-race protest against Racing Point’s looky-likey 2019 Mercedes is heavy stuff and drags the works Mercedes team into the dispute too. Several teams have been disgruntled and suspicious that a car can be so similar to another without transfer of knowledge. The FIA have already taken a close look at the processes, but now Renault have challenged in particular the remarkably similar brake cooling ducts which are included in the many ‘Listed Parts’ and which must be created by each team for solely themselves.

Goodness only knows what will happen if the FIA find they are identical to the 2019 Mercedes brake ducts which they’ve also commandeered. Certainly, RP would lose all their results to date this year, but what would they race going forward, and how much would Mercedes be implicated? Both teams are strongly insistent that nothing untoward or outside the regulations has been transferred.

I did the post-race interviews which I must say felt horrible without any crowd looking on and limited team interaction allowed between drivers amid teams.

Lewis was of course very happy after a dominant performance, albeit slightly miffed he couldn’t get the extra point for fastest lap on his heavily used tyres.

Valtteri Bottas in second place was fairly nonplussed despite still leading the championship. Although he was hampered from fourth on the grid, and had some feisty combat with Verstappen, Lewis’ performance had an all too familiar feel to it.

Max Verstappen was plain grumpy. Mercedes’ pace was just too strong despite his outstanding performance, and he’s probably thinking it’s yet another season of playing the walk-on part.

Lando Norris showed great determination and race-craft yet again to steal fifth, and the TV audiences’ driver of the day was Sergio Perez who did a fine job from 17th apart from taking his precious front wing off against Alex Albon, who finished fourth but will not have taken much consolation from that.

Alex needs a reassuring arm around his shoulder right now because he is much better than his results show so far for various reasons, but he’s in the wrong team for such compassion.

I’m writing this on a Sky team bus between Austria and Hungary, where on arrival we are forbidden to step foot out of the hotel unless we are going to the track, with a €15,000 fine and/or imprisonment if we do. After having an industrial size cotton bud down the back of my throat and shoved into my sinus cavities five times in the past two weeks for negative COVID-19 tests that’s disappointing, but it’s all fine in the end as long as we can keep the show on the road.

Events this year were downsized due to the fact that of the pandemic. Bells have actually tolled in Hiroshima, Japan, to mark the 75...

The NBA has actually handled its very first fresh start of COVID-19 tests. The league exposed that it has actually checked 346 gamers...

Petry, Habs put Pens on brink of elimination By Reuters

3/3 ©Reuters NHL: Montreal Canadiens-Workouts 2/3 Jeff Petry's sharp-angle objective in the 3rd duration Wednesday offered the Canadiens a 4-3 win over the...