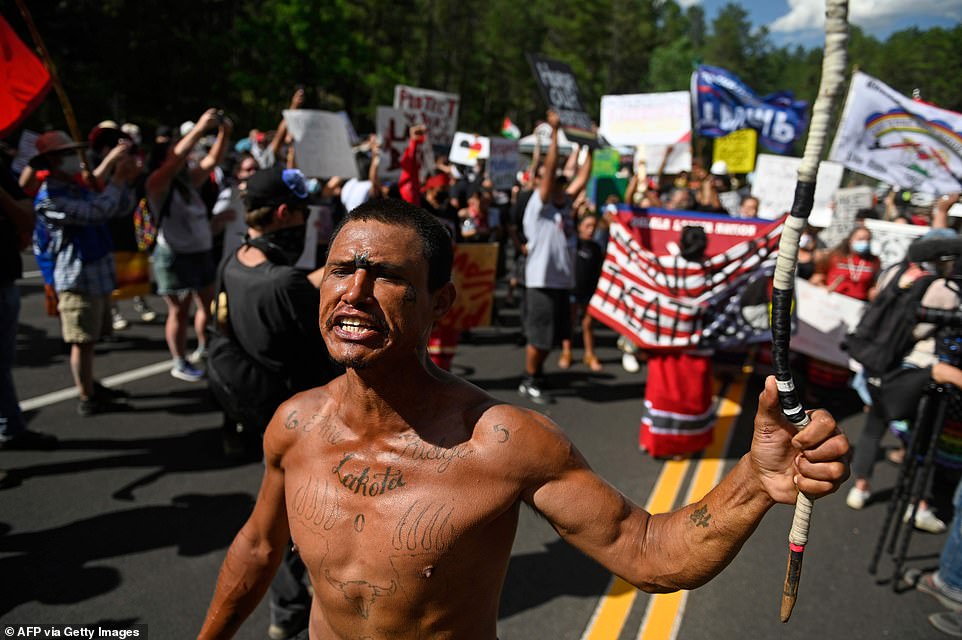 ‘You are on stolen land’: Native American protesters face off with National Guard and police after blocking a road leading to Mount Rushmore ahead of Trump’s Independence Day speech

President Donald Trump planned a fiery Mount Rushmore speech Friday night including denunciations of protesters he says are trying to ‘tear down’ the nation’s history.

He’s adding the condemnation of those who pull down statues to a large fireworks show and his more conventional July Fourth praise of America’s past and values.

Hours before the event, protesters blocked a road leading to the monument. Authorities worked to move the demonstrators, mostly Native Americans protesting that South Dakota’s Black Hills were taken from the Lakota people against treaty agreements.

One group parked three vans over the road and took the tires from two of them to make it more challenging to take them off.

Several demonstrators climbed on top of the vans chanting ‘Land back!’ Police and National Guard soldiers moved in and a standoff ensued, with police using pepper spray on a few protesters. Tow trucks then began removing the vans from the road.

Activists and members of different tribes from the region block a road as they protest in Keystone, South Dakota on Friday 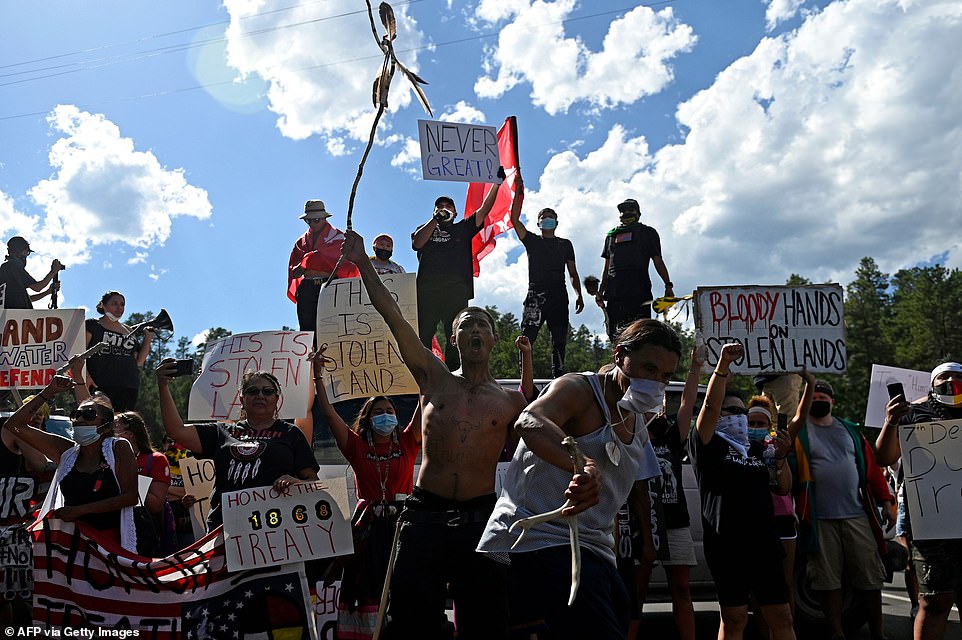 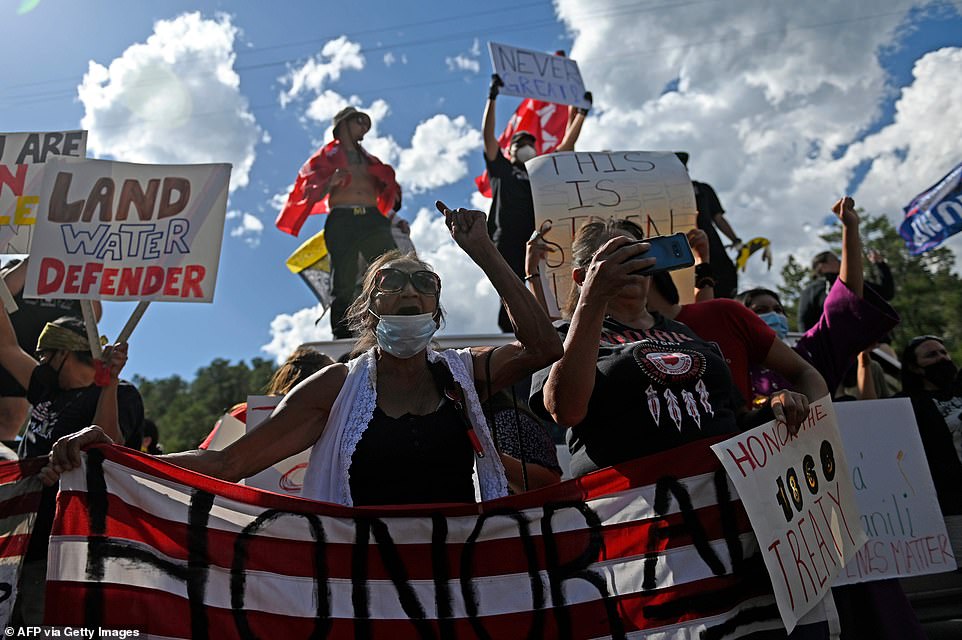 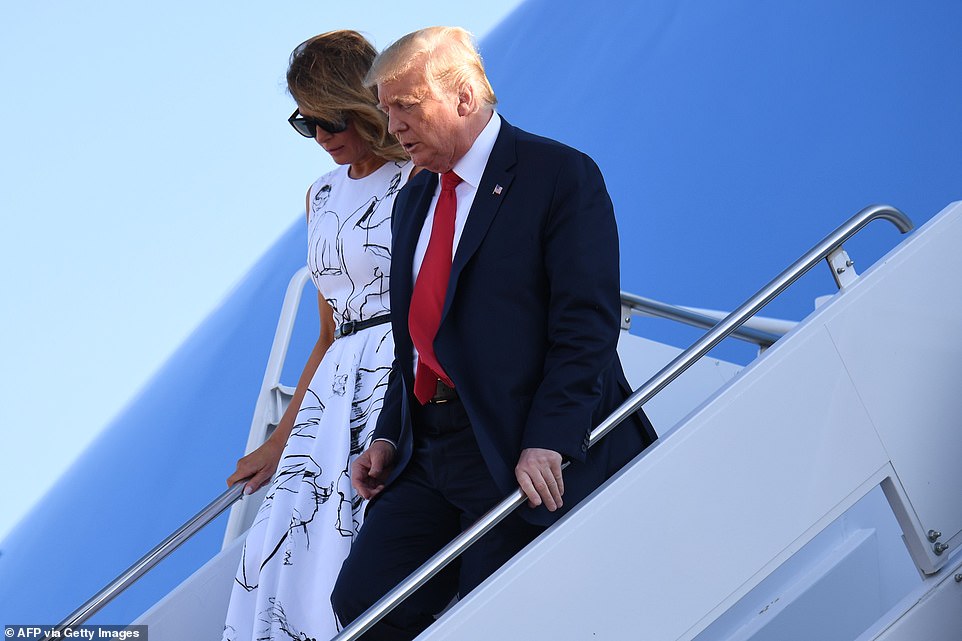 The president has spoken forcefully against other protesters in Washington, D.C., as well as other cities who’ve tried to topple Confederate monuments and statues honoring those who have benefited from slavery, planned to target ‘the left wing mob and people practicing cancel culture,’ said an individual familiar with his remarks and describing them only on condition of anonymity.

The president was to preside over a fireworks display at an event expected to draw thousands, even while coronavirus cases spike around the world.

Trump was expecting a South Dakota show of support, with their state Republican Party selling T-shirts that feature Trump on the memorial alongside George Washington, Thomas Jefferson, Theodore Roosevelt and Abraham Lincoln. But concern about the coronavirus risk and wildfire danger from the fireworks, combined with Native American groups’ protests were also present.

Republican Gov. Kristi Noem, a Trump ally, has said social distancing will not be required throughout the event and masks will soon be optional. Event organizers were to provide masks to anyone who wanted them and in the offing to screen attendees for symptoms of COVID-19. 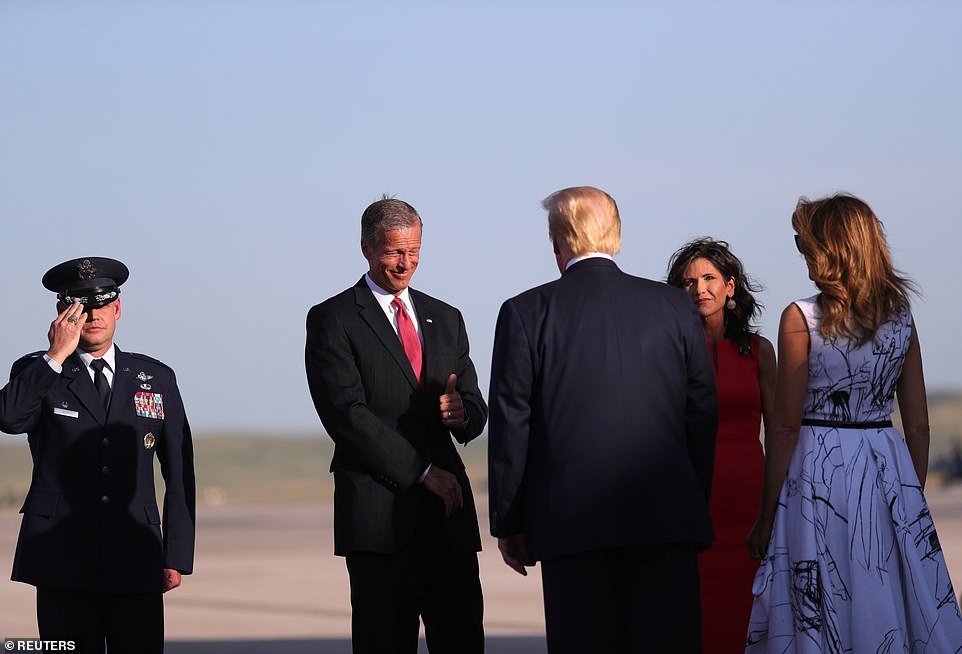 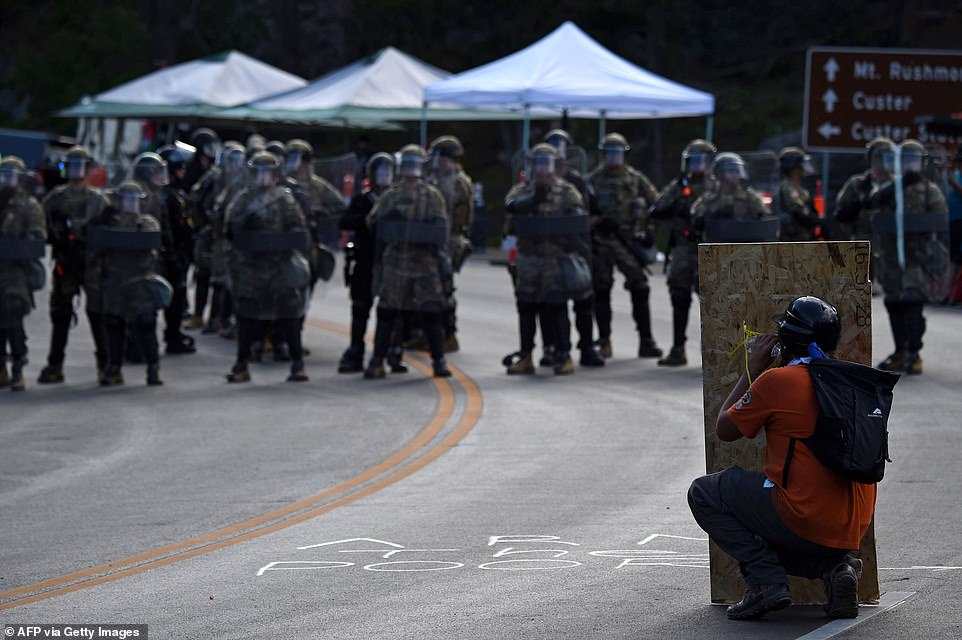 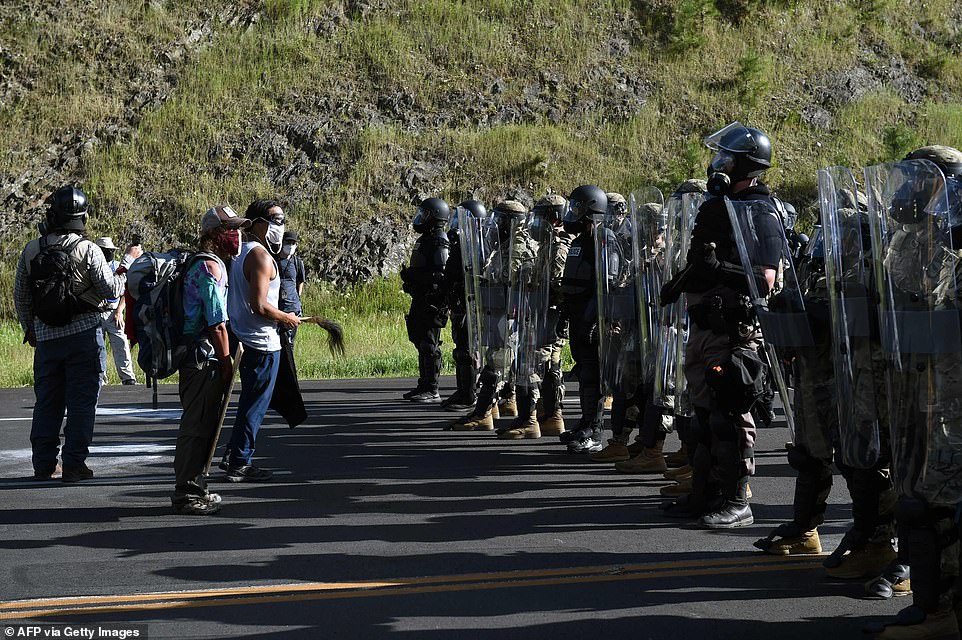 Noem and Sen. John Thune, R-S.D., were on the list of crowd meeting the president and First Lady Melania Trump at Ellsworth Air Force Base. Noem was not wearing a mask; Thune removed his face covering as that he waited to greet the president.

The Republican mayor of the largest city near the monument, Rapid City, said he’d be watching for a growth in cases after the event, the Rapid City Journal reported.

Enthusiastic attendees were unlikely to disqualify themselves ‘because they developed a cough your day of or the day before,’ Mayor Steve Allender said.

The small town of Keystone, which lies a couple of miles from the monument, was buzzing with people Friday hoping to catch a glimpse of the fireworks and the president. Many wore pro-Trump T-shirts and hats. Few wore masks.

‘This goes to rank up in the top Fourth of Julys that I talk about,’ said Mike Stewhr, who brought his family from Nebraska.

Mike Harris of Rapid City, who said that he was a Republican, wore a mask and waved an anti-Trump flag. He also was sporting a handgun on each hip. He said he was worried the big event would spark a COVID-19 outbreak.

‘I think it’s a bad example being set by our president and our governor,’ Harris said.