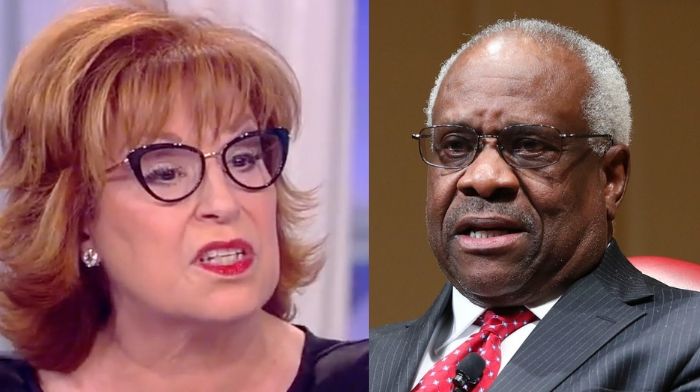 On Tuesday’s episode of “The View,” Joy Behar launched what can only be described as a racist attack on Supreme Court Justice Clarence Thomas when she brought up his marriage in an attempt to shame him for dissenting on the latest ruling from the highest court in the land.

The United States Supreme Court ruled that employers who fire workers for being gay or transgender are violating Title VII of the Civil Rights Act of 1964. Fox News reported that Justice Thomas was one of three judges who dissented from the ruling, with the other two being Justice Samuel Alito and Justice Brett Kavanaugh.

Behar, however, chose to single out the African American Thomas by arguing that he should be especially ashamed of himself, since she described the ruling as a victory for civil rights.

“Alito and Kavanaugh and particularly Judge Thomas should hang his head in shame,” Behar said. “This is a man who is in fact married to a Caucasian woman, which was illegal until 1967 when the Supreme Court voted in favor of Loving v. Virginia.”

“They voted for integrated marriage in 1967,” she added. “That was, again, decided by the Supreme Court, which is where he sits. So, he should know better. The other two are lost causes.”

.@JoyVBehar on SCOTUS’s LGBT ruling: “Judge Thomas should hang his head in shame. This is a man who is in fact married to a Caucasion woman, which was illegal until 1967 when the Supreme Court voted in favor of Loving v. Virginia. … He should know better” pic.twitter.com/iFrG8vhqc3

Attacking black conservatives has become a favorite pastime of the Left as of late. Last month, presumptive Democratic presidential nominee Joe Biden went so far as to suggest that black conservatives “ain’t black” if they support Donald Trump over him.

Justice Thomas fired back at these kinds of attacks from Democrats in a new documentary.

“But it turned out that through all of that, ultimately the biggest impediment was the modern-day liberal,” he continued. “They were the ones who would discount all those things because they have one issue or because they have the power to caricature you.”

He also opened up about how he and Housing and Urban Development Secretary Ben Carson are treated as black conservatives in this country.

“There’s different sets of rules for different people,” Thomas said. “If you criticize a black person who’s more liberal, you’re a racist whereas if you can do whatever to me — or now, Ben Carson — and that’s fine because you’re not really black because you’re not doing what we expect black people to do.”

This all serves as a reminder that despite what the media says, Democrats like Behar and Biden are far more racist than modern Republicans could ever be.

This piece was written by PopZette Staff on June 17, 2020. It originally appeared in LifeZette and is used by permission.

U.S. President Donald Trump has actually independently gone over with advisors the possibility of replacing Defense Secretary Mark Esper after the November election...

The Las Vegas Raiders included depth to a thin pass-rushing group, including former first-round pick Datone Jones to the lineup. The Las Vegas...

U.S. and China are working together to crack the case of the mystery seeds

Our objective to assist you browse the brand-new typical is sustained by customers. To delight in limitless gain access to to our journalism,...

Price: (as of - Details) The wireless Xbox one Headset for next-gen gaming immersion with the dynamic touch-sensory feedback of Razer hypersense. Powered...

We Finally Know The Chemical That Triggers Locust Swarms. Now to Use It Against...

A single locust is simply larger than a paper clip. But when these singular animals bring in others into a growing swarm, billions...

©Reuters Passersby using protective face masks, following a break out of the coronavirus, are reviewed a screen showing stock costs outside a...

On the celebration of the 100 th anniversary of the Sevres Treaty, 10 Armenian parties have actually released a joint statement, considering it...

Ambani pleads with government to open sporting activities in Kenya

The previous Harambee Stars gamer states the time has actually come for the government to open sporting activities in the nation Kenyan...
© Copyright 2020 - reporter.am