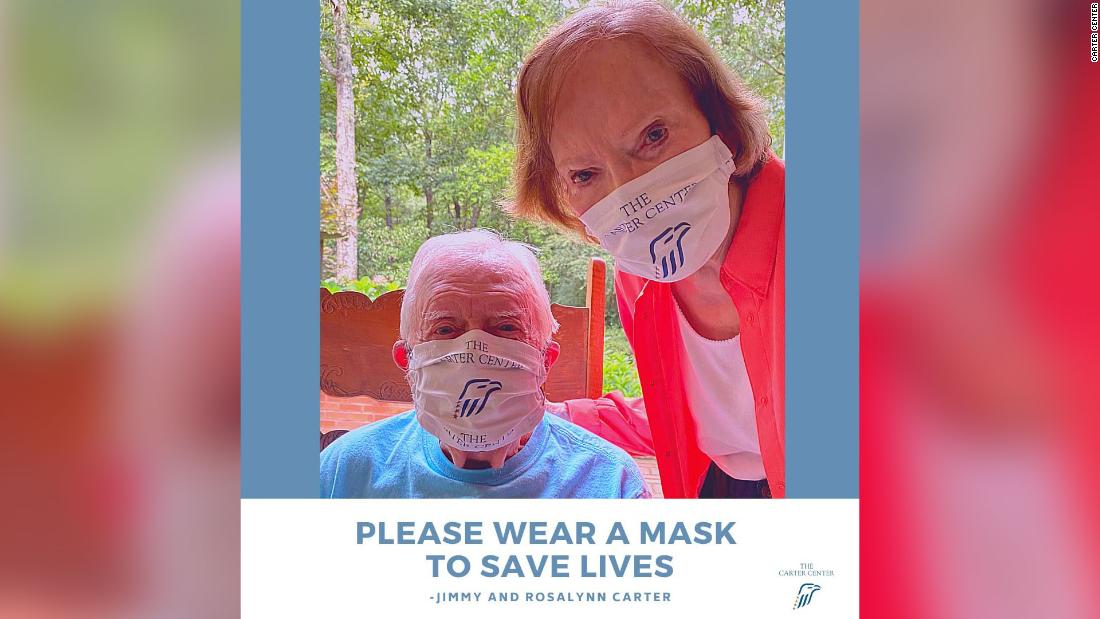 The couple’s Atlanta-based charity, the Carter Center, posted a photo on Twitter Saturday of the pair wearing white masks printed with the center’s logo. The picture was paired with the straightforward plea.

Masks have grown to be a political flash point as some Americans argue the requirement infringes upon their civil liberties. But the US Centers for Disease Control and Prevention urges everybody to wear a “cloth face cover when they have to go out in public,” noting that masks are critical “in case the wearer is unknowingly infected but does not have symptoms.”

The Carters’ message follows Atlanta Mayor Keisha Lance Bottoms’ Friday announcement that the city is rolling back its reopening to Phase 1 and will mandate face coverings. The decision left her at odds with Georgia Republican Gov. Brian Kemp.

Cases have recently raged across the South, and Georgia added a record 4,484 new coronavirus case reports in one day, according to the state’s department of public health on Friday.

President Donald Trump has to date refused to wear a mask in public and done little to encourage his supporters to embrace the public health measure. He has, however, said he will wear a mask during a visit to Walter Reed National Medical Center on Saturday.
Carter, a Democrat, has before appealed to the public to do its part during the pandemic. In March, the former president asked donors to “forgo (their) next gift” to the Carter Center and instead support local groups working to ease the “suffering caused” by the pandemic.

The Carters established the Carter Center in 1982 in Atlanta, with initiatives including fighting diseases in developing countries. One of the key accomplishments of the Carter Center is the near-eradication of Guinea worm disease from an estimated 3.5 million cases in 1986 to 54 provisional cases in 2019.

Leila Cavett: The FBI is asking for the public’s help in Georgia mom’s mysterious disappearance

Formula 1 groups are all too knowledgeable about Barcelona, having actually finished 2 pre-seasons tests at the place in February. The circuit...

Blockchain Investments Fell 63% Due to Pandemic

Professional services firm KPMG has actually released a report forecasting that blockchain will be among 5 emerging innovation sectors to see increased financial...

Price: (as of - Details) EXQUISITE QUAILTY: The replacement case is made of high quality PC material to protect your Switch from daily...

Leila Cavett: The FBI is asking for the public’s help in Georgia mom’s mysterious...

Leila Cavett, 21, was last seen July 26 in South Florida simply hours prior to her 2-year-old child, Kamdyn, was discovered strolling without...

A Miami policeman uses a mask to impose the city's mask required. A Florida sheriff has actually prohibited his officers from wearing face...

NEWPORT, Wales --Alex Levy ended up being the very first golf player to test positive for the coronavirus at a European Tour...

By Tanisha Heiberg and Emma Rumney JOHANNESBURG (Reuters) - In an Italian restaurant in an upmarket Johannesburg area, smiling clients chat at...
© Copyright 2020 - reporter.am