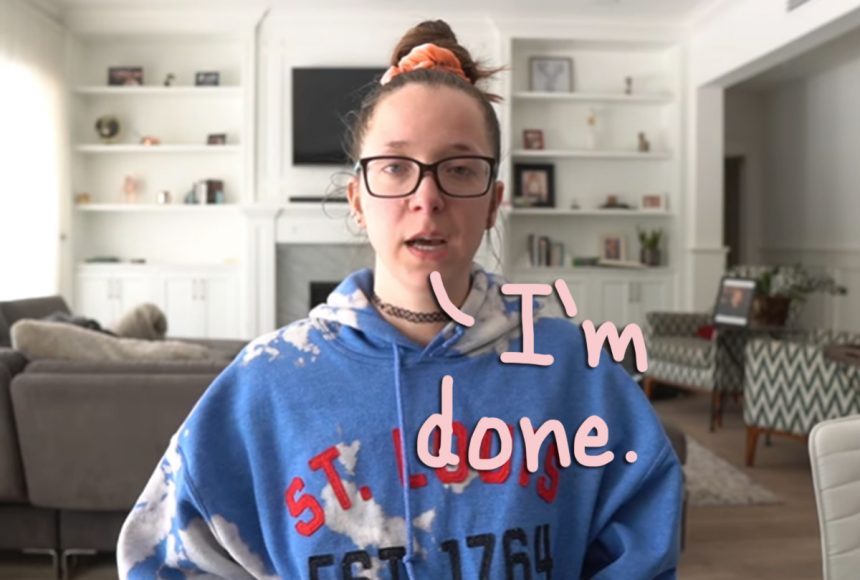 The hugely popular longtime video creator, real name Jenna Mourey, has been on the platform for ten years, putting out countless videos that have amassed literally billions of views to go along with a lot more than 20 million channel subscribers. But now, she’s done — and she’s citing her old problematic videos as the reason.

Citing the need to purge the world of “anything and everything toxic,” the 33-year-old longtime creator announced in a tearful 11-minute-long video that she would be stepping down from the platform for quite a while, if not forever.

Noting her motivation for the move was to no more offend people who have questionable content, the vlogger said (below):

“I think there was a time when having all of my old content exist on the Internet showed how much I have grown up as a person, which I’m very proud of. I think now it’s hard for that content to exist at all because I think people watch it and don’t bother to look at when it was posted or care about what path I took to get to where I am. It offends them now and, if that’s the case, where people will watch something and be offended now, I don’t want it to exist.”

Mourey cited several problematic videos included in the impetus for walking from her channel, specifically atoning for a 2012 clip in which she slut-shamed women “who ran around and slept around,” and a 2011 music video containing lyrics which mocked Asian men.

She confirmed that those videos, and several the others she has since deemed problematic, have always been set to private for them to no longer be considered on her channel.

The upstate New York indigenous also spoke directly of a 2011 video in which she spoofed Nicki Minaj, complete with a pink wig and an extremely dark tan that some critics have called her out for as blackface. The vlogger was visibly upset in talking about this long-since-made-private video, too, saying:

“I do just want to tell you that it was not my intention to do blackface. I don’t know how else to say this, but it doesn’t matter because all that matters is that people were offended and it hurt them. For that, I am so unbelievably sorry. This isn’t okay and it hasn’t existed on the Internet for a long time because it’s not okay. I do want to tell you how unbelievably sorry I am If I ever offended you by posting this video or by doing this impression. It’s not okay. It’s shameful. It’s awful. I wish it wasn’t part of my past.”

Visibly upset about the whole thing arriving at an end such as this, Mourey took a moment to assemble her thoughts and calm her emotions before concluding:

“For now, I just can’t exist on this channel. Hopefully, I’ve taken down anything that might upset someone. I think I’m just going to move on from this channel for now. I don’t know if that’s forever. I don’t know how long it’s going to be. I want to make sure that the things that I put into the world are not hurting anyone.”

You can view her full video here:

Reactions, Perezcious readers? Was this the right move for Jenna Marbles to create? Did U think her apology was sincere? Sound off along with your take on the whole lot down in the comments (below)…