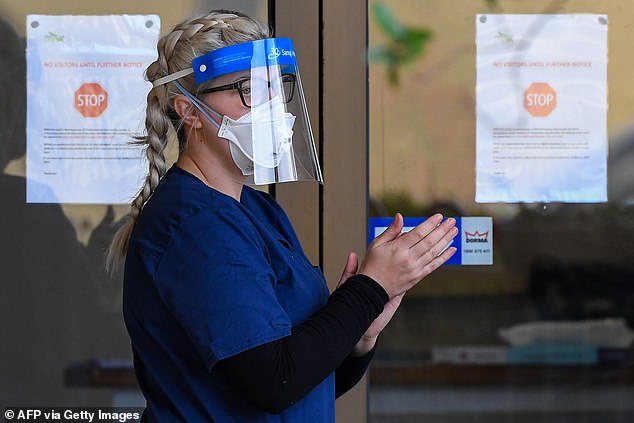 Healthcare workers with coronavirus symptoms have admitted they are turning up to shifts because they cannot afford to take time off work to be tested.

Fears are mounting an outbreak similar to the one in Sydney’s Newmarch aged care facility early this year, which infected 71 people and claimed 19 lives, could unfold if employees are not offered financial assistance.

The deadly Sydney outbreak began after a member of staff came to work despite suffering coronavirus symptoms.

A number of casual staff in aged care and disability have told the ABC they worked with COVID-19 symptoms because they were not entitled to sick leave or annual leave and could not withstand the financial blow of mandatory isolation.

A Melbourne aged care worker, who did not want to be named, said he knew of cases where staff worked because they felt like they had ‘no choice’.

A staff member at the Menarock Life aged care facility (pictured), which has been linked to 31 new COVID-19 cases, is pictured sanitising her hands outside. There is no indication staff at the centre have been going to work while unwell 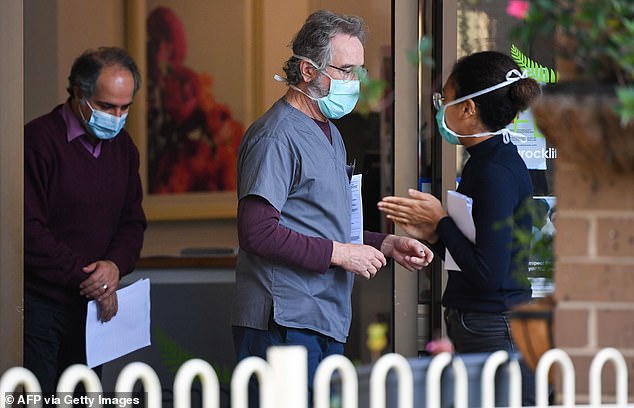 People wearing face masks are seen at the entrance of the Menarock Life aged care facility (pictured on Tuesday) where a cluster of new cases have been reported this week. There is no indication staff at the centre have been going to work while unwell

As of Tuesday, four aged care homes in Victoria have been hit by coronavirus infections, with older people particularly vulnerable to the disease.

‘I know people who have gone to work feeling sick and they’ve been told if you have any symptoms at all, you should not go to work, but if they have no leave they feel like they don’t have a choice,’ he said.

‘This industry has a lot of casual workers and they are desperate for work so if they feel a bit ill, they come to work.’

More Victorians would die if aged care workers did the wrong thing and continued working when they were sick, according to Deputy Chief Medical Officer Michael Kidd. 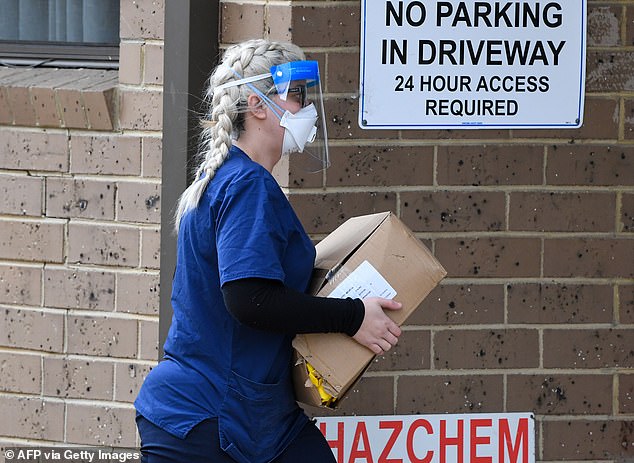 A staff member at the Menarock Life aged care was seen carrying a delivery into the facility on Tuesday (pictured). There is no indication staff at the centre have been going to work while unwell

‘We all remain very concerned about the outbreaks that we’re seeing in residential aged care facilities in Melbourne,” Professor Michael Kidd said on Tuesday.

‘We recommend that all staff working in residential aged care facilities or providing home care support in Victoria in the areas under restriction when community transmission is occurring must be wearing a surgical mask, when at work.’

‘Most importantly, no worker in aged care or home care should be going to work, if they have any symptoms, no matter how mild.

‘To do so is putting lives at risk.’

Queensland and Victoria are currently the only two states offering a $1,500 hardship payment to assist those ordered by health authorities to undergo 14 days of home quarantine if they contract the virus outside of their workplace. 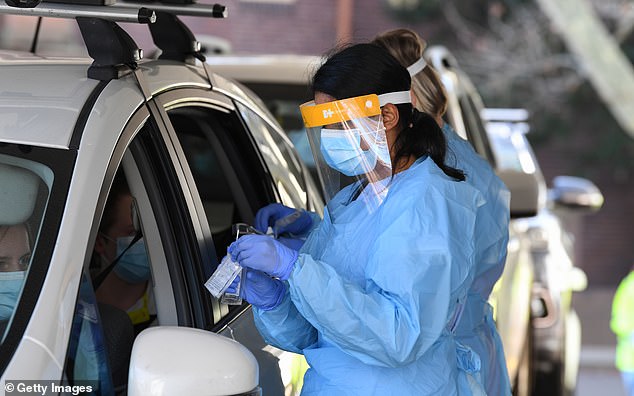 However, those who get tested on their own accord are not eligible for the benefit while they await results – leaving some feeling forced to keep going to work.

The second wave in Victoria took a frightening turn this week as fresh coronavirus clusters have emerged in aged care homes.

There have been 31 cases at Menarock Life in Essendon, 13 cases at nearby Estia Health in Ardeer, 13 at Glendale Aged Care in Werribee and two infections at Japara Central Park in Windsor.

State health officials said they are heeding advice based on the horror April outbreak at Newmarch, in Penrith, which saw 37 residents and 34 staff test positive, with 19 cases resulting in death.

In recent weeks, the Fair Work Commission has been bombarded with complaints about the issue from a series of unions representing aged care, disability care, hospital, pharmacy, pathology, and ambulance staff.

Health Workers Union State Secretary Diana Asmar said she was fearful of seeing outbreaks across aged care facilities in Victoria, like in Menarock and Newmarch, where ill-workers infected elderly patients.

However, despite submissions alerting the FWC about cases of frontline staff working ill, the commission ruled the it did not consider the pandemic to be at a stage in which healthcare workers required paid leave.

Workers and unions are now afraid more people will continue to work with coronavirus symptoms, jeopardising the health of vulnerable patients. 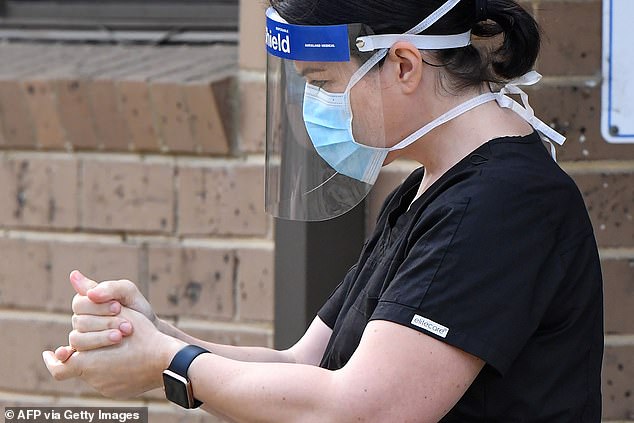 Aged care and disability workers are among the lowest-paid employees within the welfare sector (pictured, a Menarock Life worker sanistising her hands outside the facility on Tuesday)

While the commissioners agreed healthcare workers may continue to work with symptoms, they ruled the uptick in cases seen in Victoria was due to community transmission – not from infections spreading through health and aged care facilities.

The FWC also noted enforcing paid pandemic leave could cause ‘significant financial difficulty for some employers’.

The application has been adjourned by the commission until the virus is deemed out of control in healthcare settings.

Although employees who catch coronavirus at work can apply for workers’ compensation, health care unions said staff face the difficult task of proving they picked up the illness on duty before they are awarded the payment. 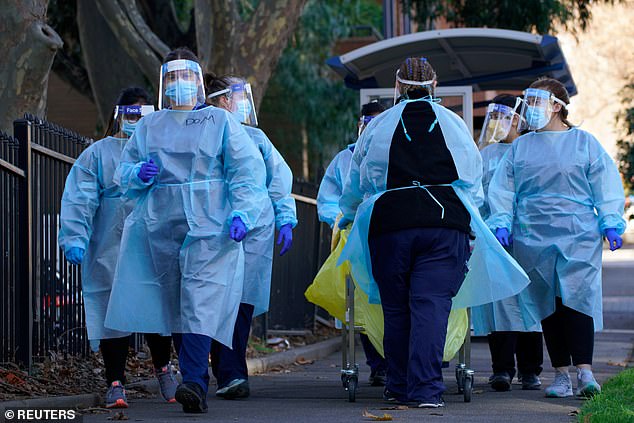 Disability and aged care workers are also among the lowest-paid employees in the welfare sector.

The Victorian aged care worker said many feared to ask bosses for time off out of fear they could have their shifts cut.

‘They are usually on low incomes and a lot of them are on temporary visas and have to work a certain number of hours under their visa,’ he said.

Doherty Institute infectious diseases epidemiologist Benjamin Cowie said it was ‘absolutely the case’ that lower income earners were filling essential roles, and they are often completing tasks in which physical distancing is difficult and PPE is limited.

As a result, Professor Cowie said these groups were at a higher risk of contracting COVID-19 but also more likely to push through shifts while sick.

Victorian Premier Dan Andrews rolled out the $1,500 testing incentive earlier this month after fearing the reason almost 1,000 residents refused to get tested was because they could not afford the financial loss of being home sick.

‘I think there might be some people that don’t have access to pay, whether it be sick pay or holiday pay,’ he claimed.

‘Their economic circumstances might be very uncertain and the notion of having two days away from work while you wait for your test result may be a big challenge.’