A gravestone for Dam Busters legend Guy Gibson’s pet dog ‘N****r’ has been removed and replaced with one without his name – sparking fury among veterans.

The stone tablet, which is based at RAF Scampton in Lincolnshire, honoured Gibson’s black Labrador, which was run over by a car and killed on the day of the famous raid.

But RAF top brass have now paid for a new memorial, replacing where his name was with an outline of the famous canine and the words ‘The Dog’.

It came after the service carried out a ‘review of its historical assets’ and decided the term – which is an offensive slur against people of colour – had to go.

Until now it had remained untouched at RAF Scampton – the World War Two base of 617 ‘Dam Busters’ Squadron – for years in the dog’s honour.

The switch was only revealed when headstone firm Draper Memorials posted an image of the new tablet online. 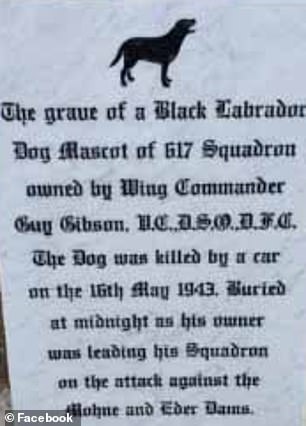 RAF top brass have now paid for a new memorial for Guy Gibson’s pet dog ‘N****r’, replacing where his name was with an outline of the famous canine and the words ‘The Dog’ (pictured left: The old gravestone. Right: The new) 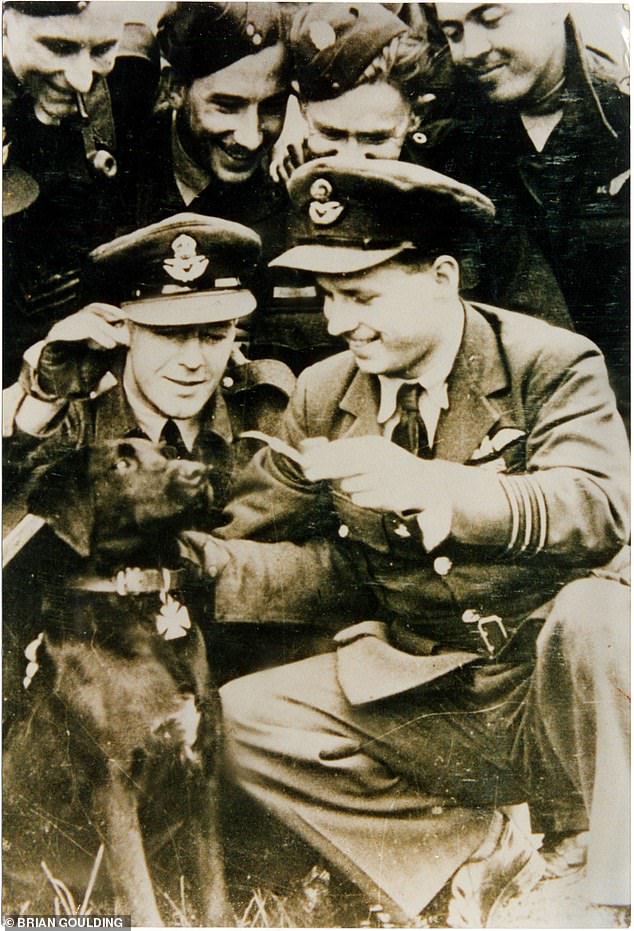 Wing Commander Guy Gibson VC (right), Dambusters hero with his devoted dog ‘N****r’. The black labrador was kiiled by a hit-and-run driver just hours before Gibson led the RAF’s crack 617 squadron to drop ‘bouncing bombs’ on German dams in May 1943 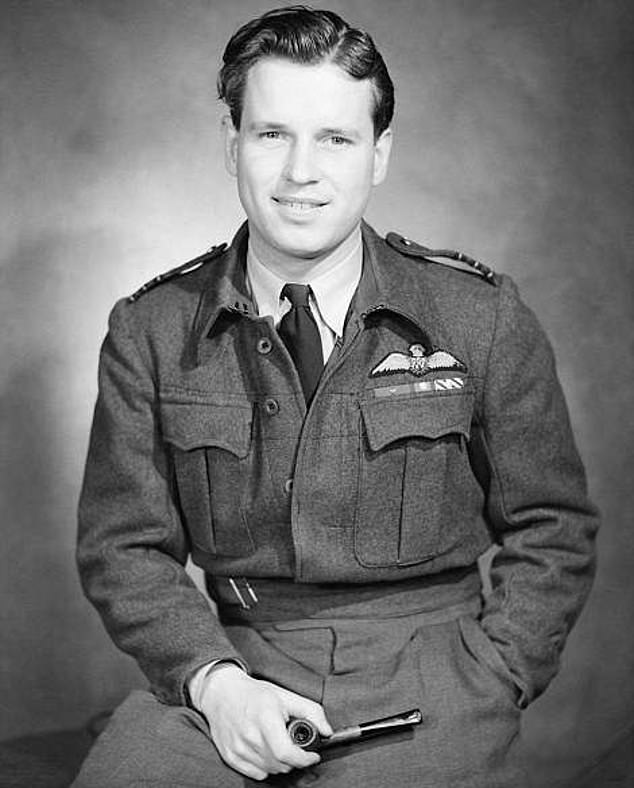 Wg Cdr Guy Gibson, Officer Commanding No. 617 Sqn, was awarded the VC for his part in leading the Dambusters raid

Royal Air Force veteran Mark Dewberry told the company he was disgusted about the monument being changed.

He said: ‘You have questions to answer about replacing N****r’s memorial stone.

The Dambusters: How bouncing bombs – and incredible flying by RAF pilots – flooded the Ruhr and delivered a crucial blow to Hitler

On May 16, 1943, 19 Lancaster bomber crews gathered at a remote RAF station in Lincolnshire for a mission of extraordinary daring – a night-time raid on three heavily defended dams deep in Germany’s industrial heartland.

The dams were heavily fortified and needed the innovative bomb – which bounced on the water over torpedo nets and sank before detonating.

To succeed, the raiders would have to fly across occupied Europe under heavy fire and then drop their bombs with awesome precision from a mere 60ft above the water.

The Mohne and Eder Dams in the industrial heart of Germany were attacked and breached by mines dropped from specially modified Lancasters of No. 617 Squadron.

The Sorpe dam was was also attacked by two aircraft and damaged.

A fourth dam, the Ennepe was reported as being attacked by a single aircraft (O-Orange), but with no damage.

Up to 1,600 people were estimated to have been killed by floodwaters and eight of the 19 aircraft dispatched failed to return with the loss of 53 aircrew and three taken prisoner of war.

Wg Cdr Guy Gibson, Officer Commanding No. 617 Sqn, is awarded the VC for his part in leading the attack.

The raid, orchestrated by Guy Gibson and the RAF’s 617 ‘Dambuster’ Squadron, was seen as a major victory for the British, and Wing Commander Gibson is recognised as one of the war’s most revered heroes.

Their success was immortalised in the classic 1955 film The Dambusters, its thrilling theme tune and gung-ho script evoking the best of British derring-do

‘Are you going to delete this post and start to disrespect your countries veterans. You all should be ashamed of yourselves.’

Despite having been paid for the work, Drapers’ originally comment next to their now-deleted post seemed to hint at their own disquiet over the change.

It said: ‘This morning we have been out to replace the plaque to Guy Gibson’s black Labrador at Raf Scampton. You can’t rewrite history’.

Owner Ian Credland refused to comment on the furore when he was contacted by the MailOnline this afternoon.

The dog, that served as the mascot of 617 Squadron, was run over by a car and killed on the day of the famous raid in May 1943.

He was buried at Scampton at midnight, the very moment his owner was leading the daring attack on a series of dams in Germany’s Ruhr Valley for which he won the Victoria Cross.

The gravestone was marked with his name at the top and the story of his demise beneath it.

But the RAF today confirmed the headstone has been removed and placed in storage as the name on it could cause offence to people.

It has instead been replaced with a brand new stone which bears the outline of a black Labrador dog at the top instead of its name, although the wording underneath remains the same.

An RAF Spokesperson said: ‘As part of an ongoing review of its historical assets, the RAF have replaced the gravestone of Guy Gibson’s dog at RAF Scampton.

‘The new gravestone tells the story of Guy Gibson’s dog, but the name has been removed.’

But not just veterans were offended by the change, with social media lighting up over the replacement.

Derek Murray said: ‘Guy Gibson’s dog, henceforth to be referred to as ‘the dog’ or, more formally, ‘the dog belonging to the pilot’.

Andy Porter said: ‘Those of you who know Scampton will be aware of the grave of Guy Gibson’s dog N****r outside Hangar 2.

‘The memorial stone has very recently been replaced. It seems history can be changed…’

Gus Turnbull posted on social media: ‘Now they’ve gone too far. It’s part of history and the dog belonged to a British hero recipient of our country’s highest award for valour. You cannot change history to appease militants.’

There has been a lot of controversy over the use of the dog’s name over the years.

In the 1955 war film, The Dam Busters, in which Richard Todd played Guy Gibson, the pet was called by its original name.

In 1999 ITV removed any mention of the name in a re-run of the film while a US version of the movie changed the name to Trigger by dubbing over it. 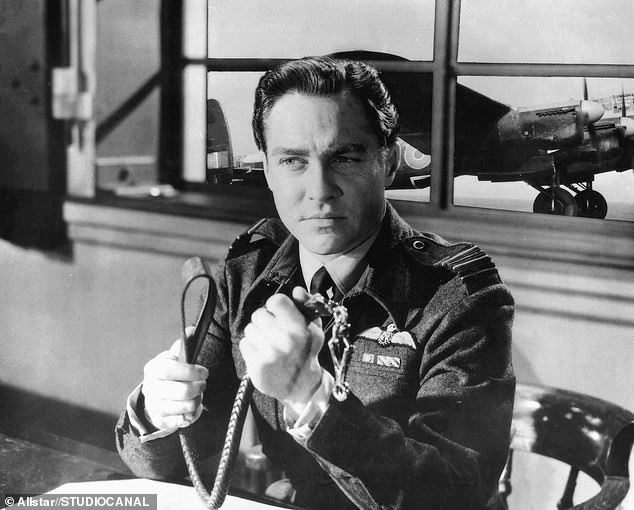