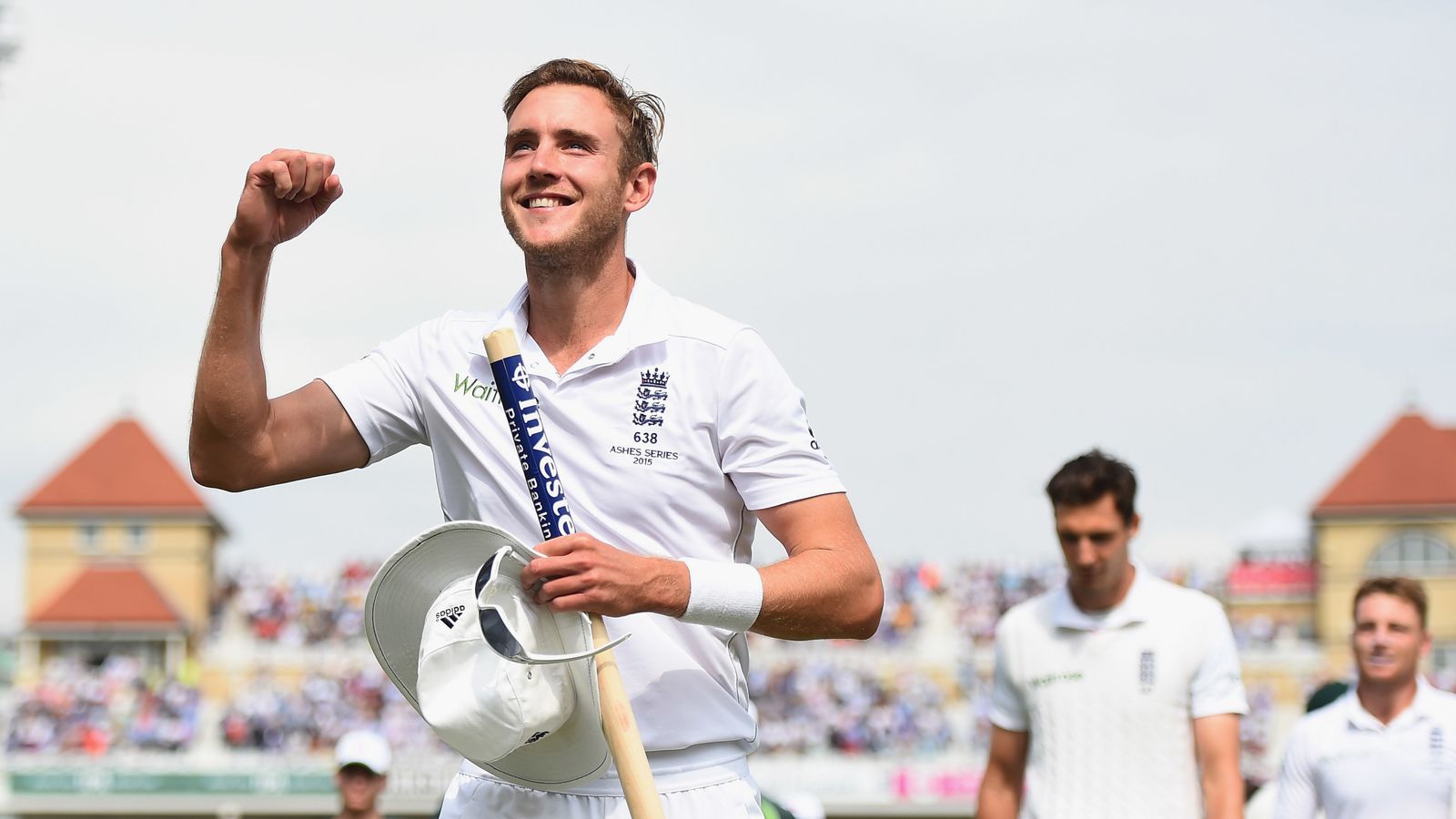 “For Cooky to be brave enough to put catchers there made this possible – any mistake for the batsmen was just out,” says Broad throughout Trent Bridge watchalong

Stuart Broad picked up career-best figures on a staggering morning at Trent Bridge in August 2015 as England razed Australia for simply 60 to take an iron-clad grip on the Ashes urn.

On a particular watchalong of the opening session of the fourth Ashes Test 5 years in the past, Broad mirrored on his dazzling spell on his house floor in the absence of the injured James Anderson.

“It was an amazing feeling, especially being at Trent Bridge, somewhere where I have got such great connections,” Broad informed Sky Sports Cricket.

“It was a little bit of a daze up till Joe Root walked off on the finish of the day when it was recreation carried out [England were 274-4 and leading by 214].

“I never expected to be having a cup of tea watching Alastair Cook walk out to bat pre-lunch having bowled.”

Read under to listen to Broad focus on his 300th Test wicket, Ben Stokes’ gorgeous, one-handed catch, why he didn’t take crucial wicket of the day, and bowling to left-handers…

“Shane Warne walked past me just before the toss and said, ‘this could be a bowl-first day’. That was coming from the most bat-first person in the world! I was nervous [opening the bowling]. It was the first time I ever bowled the first ball of the Test match, the first time I ever had to set the tone. It was nice to get [the 300th Test wicket] early, but I don’t remember the 300th being on my mind, it was more about setting the tone without Jimmy. Looking back you see how attacking we were with the fields. For Cooky to be brave enough to put catchers there made this possible – any mistake for the batsmen was just out.”

“I always find with Warner that if there is movement in the pitch and you are searching for an area, he goes after the fuller ball and is so dangerous. He hits width when it is swinging very well. To get him for nought was huge – you could see the celebrations from everyone. I think that was the biggest wicket of the day.”

On his plans to Australia captain Michael Clarke…

“When I was a bit younger, I had a bit of success with the short ball against him. I felt that if I had a short leg, it just affected his footwork slightly, that if I could get him expecting it, then that brought the fuller ball into the equation. I remember he pulled Woody and we said on this pitch and with the pressure Australia were under, we weren’t sure the short ball was the way to go. [For the wicket ball], the plan was to go a bit fuller having pretended I was going to bowl a short ball. I had done the old ‘I’m going to bowl a bouncer here, everyone!'”

On dismissing Shaun Marsh and bowling to left-handers…

“Marsh came hard at the ball, liked to feel bat on ball, so we thought that he would push quite hard. [The ball did] the perfect amount. As bowlers, we never want the ball to nip a long way, we want it to nip half a bat’s width, that’s when it’s so dangerous. I hadn’t bowled that much around the wicket before this series but the wickets of Marsh and Rogers gave me lot of confidence. It was exactly what I was looking to do – hold the seam up straight, target off stump and bring batsmen forward.”

“Stokesy has this finger that we call ‘The Claw. He badly broke it when he was younger and it is almost double the thickness of a normal finger. I genuinely think it helps the ball stick in his hand! The 2019 World Cup catch [at the Oval, against South Africa] was awesome but I think this one for reaction, for instinct was so special. I don’t know if it was the emotion of seeing Stokes take that catch but I lost my run-up. I was stood at my mark forgetting whether I go off my left foot or right. It sounds ridiculous! Fortunately, I got it back in the next over. If I ever feel like I have lost my rhythm, I sing a random song as it stops me thinking.”

On being determined to wrap up the Australia innings…

“I have memories of frustration of that day. I remember when I got Johnson or Starc out that it felt like they had got 70 each and it had been overs and overs. I remember feeling relief – that came from how quick things had happened in the first six overs and how it then felt everything was happening quite slowly. What you also didn’t want was the last two whacking 30 each as we still didn’t know what a good score was. If they got 130 and we got 150 the game was still wide open. We wanted to finish the innings as quickly as possible.” 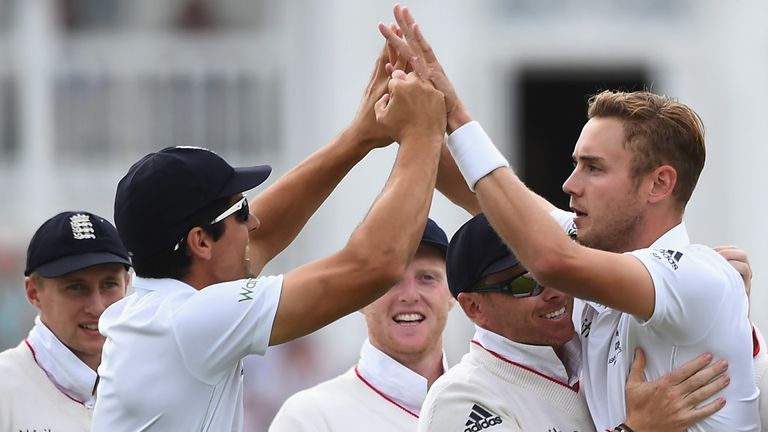 If you have a look at these situations and the gorgeous size Broady bowled right through – at all times attempting to push it fuller and get individuals coming ahead. – if Anderson had been partnering him, I most likely wouldn’t ever have gotten the ball in my hand!

On his devastating spells for England in Test cricket…

“The more experienced I have got I think I can pick up on certain things I am looking for to try and replicate. Conditions plays a big part a lot of the time, they sometimes suit my strengths. A lot is also to do with the run-up – I feel I need energy and my knees picking up in a certain way. One thing when I have picked up these wickets in groups is that my mind is always so clear. I am not thinking too much about what I am doing, about setting batsmen up, so to speak. I’m just running in, doing the basics well and making batsmen play. It’s frustrating as you’d love to be able to bowl spells like this every day.”

Watch the entire of the 2015 Trent Bridge Test – which England received to regain the Ashes – on Sky Sports Cricket over the Bank Holiday Weekend.

Verizon’s Samsung Galaxy A10e and Galaxy A20 get Android 10

A striking pale pink mansion in the exclusive Primrose Hill area of London has just gone in the marketplace for a tad over $11 million...

July 4th: Is it worth celebrating America this year?

The head of the statue was then decapitated and perched together with a spike, and much of the rest was melted down seriously...

Getaway gridlock! Caravans stuck in huge jam on M5 as over 10 million motorists...

Caravans were stuck in a huge jam on the M5 today as a lot more than 10 million motorists hit the road today...

HOW TO HAVE A SAFE COOKOUT AND CREATE NEW TRADITIONS IN THE TIME OF CORONAVIRUS In a survey by Grill Cook Bake, an amateur-chef-created...

80 artists are skytyping over US ICE facilities

Written by Jacqui Palumbo, CNN This Independence Day Weekend, 80 artists are asking Americans to check up at the skies. Over July 3 and...

James Milner exclusive: There from the start at Liverpool | Football News

Brown said on social media marketing that the meeting with the troopers was her idea. In posts to Twitter and Facebook, she actually...
© Copyright 2020 - reporter.am