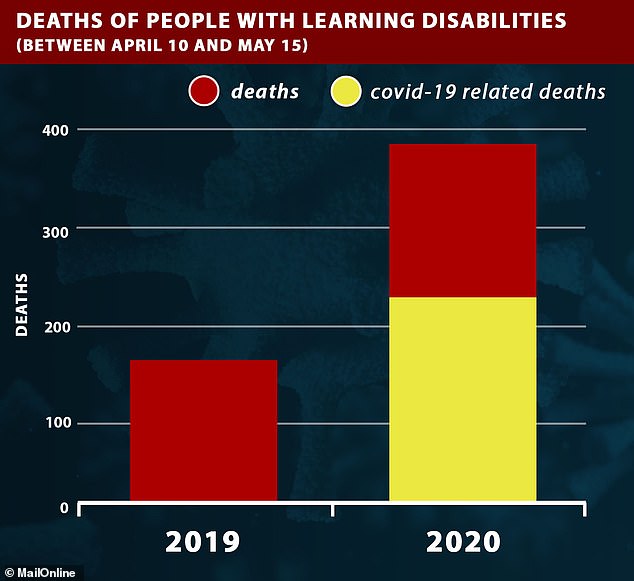 The NHS has launched an ‘urgent’ review after figures showed death rates of people with learning disabilities and autism have doubled during the Covid-19 crisis.

The dramatic U-turn uses it had previously reassured the deaths of people in this group was ‘within expected range’.

Analysis of data by two split up organisations showed that in April and May, significantly more than double the quantity of people with a learning disability, some of whom may also be autistic, died compared with exactly the same period this past year.

While the learning disability charity Mencap’s analysis showed 1,029 deaths were recorded in April and May – double the expected 480.

Charity bosses called the rise ‘deeply troubling’ and a ‘stark reminder’ that the rights of disabled people were falling by the wayside.

The NHS has admitted the CQC data, presented monthly ago, warranted an investigation.

It has been criticised for acting too slow and potentially costing lives by failing to protect those with disabilities who largely fall under NHS care.

The review by NHS England and Improvement (NHSE/I) was discovered by the Health Service Journal.

Edel Harris, chief executive of the learning disability charity Mencap, welcomed the review, but said those with disabilities had largely been ‘forgotten’ during the pandemic.

She said: ‘NHS England’s review must be urgently completed and released in order that steps ​can be taken to handle ​inequalities and discrimination before further lives are lost. This is really a matter of life or death.

‘We cannot ignore the wider reality that people with a learning disability have been largely forgotten during the pandemic.

‘Even though they have been disproportionately hit by Covid-19, they have not been prioritised for access to coronavirus testing and we have not seen timely data on deaths or any real efforts to handle people’s needs and concerns.

‘Health inequalities for people with a learning disability have been evident for a long time, but this crisis has exacerbated these with serious consequences.’

On May 15, the NHS said the Covid-19 death rates among people with learning disabilities, which include conditions like autism, Down’s syndrome and Williams syndrome, was broadly in line with the rest of the population.

PEOPLE WITH LEARNING DISABILITIES PRONE TO DIE WITH LUNG INFECTIONS

Lung infections and breathing problems would be the leading cause of death among people with learning disabilities, in accordance with officials.

People with learning disabilities include those with conditions like autism, Down’s syndrome and Williams syndrome, in addition to others who have severe brain damage or developmental delays.

‘Pneumonia and aspiration [inhaling fluid] are more common which may be from the prevalence of swallowing and eating issues and gastro-intestinal disease amongst people who have profound and multiple needs.’

The report explains that poor teeth’s health and the presence of bacteria in people’s mouths may subscribe to this increased risk of lung infections.

People with some learning disabilities may also have difficulty swallowing – an indication called dysphagia – which could contribute to the danger of disease.

Many of the muscles associated with swallowing may also be key for healthy breathing – and strong breathing control really helps to prevent disease by expelling bacteria or viruses by coughing, and stopping people from inhaling substances or fluids that might interfere with their lungs.

It said two per cent of Covid-19 deaths specifically, in hospitals, was in those with learning disability and autism, which NHS England said was roughly proportionate to the quantity of people with a learning disabilities or autism in the populace.

But on June 2, the Care Quality Commission, working with the Office for National Statistics (ONS), published data which suggested those with learning disabilities and/or autism was disproportionately afflicted with Covid-19.

It unearthed that from 10 April and 15 May, there were double the amount of deaths which were normal. This is only part of the picture as it does not include figures from the beginning of the pandemic or in the past six weeks.

And it only counted analysed death notifications from providers registered to the CQC providing care to people with a learning disability and/or autism locally and in hospitals.

The CQC did not offer an explanation for these ‘excess deaths’ unrelated to Covid-19. But generally speaking, excess deaths during the pandemic are usually as a result of compromised healthcare for other conditions, or Covid-19 deaths that have not been accounted for due to a lack of testing.

None of the deaths over the data was under the age of 25. Most was in age bracket 55-64 years.

It followed the outcome of an analysis by Mencap which looked at deaths reported to the Learning Disabilities Mortality Review (LeDeR) programme, a database published by the NHS.

It found one more 550 deaths of people with a learning disability than expected for April and May.

Mencap said Public Health England estimates that over 3,400 people with a learning disability die annually, with a level number of around 240 people monthly.

However, over April and May, 1,029 deaths of people with a learning disability, or just around an additional 550 deaths than we would have expected because of this time of year, were reported to LeDeR.

The NHS does not provide death data that can be used to compare death rates the type of with learning disabilities and/or autism now compared with last year.

But it has now acknowledged the shocking statistics given by the CQC.

The HSJ saw an announcement posted on a social networking group for Royal College of Nursing members a week ago, in which NHSE/I said they certainly were ‘urgently seeking clinical reviewers with experience in learning disability’.

HSJ reports that the message said: ‘The effects of coronavirus are having a far-reaching affect all our lives. As we find out more about the virus, we’re taking making changes to shield our wellbeing.

‘For people with a learning disability, the quantity of deaths has doubled during the Covid pandemic. (compared to data on the number of deaths recorded during exactly the same period last year).

‘As an outcome, we have a large number of deaths of people with a learning disability who have died during the pandemic whose deaths you want to review.’

When asked about the message by HSJ, NHSE/I failed to respond. MailOnline has also approached NHSE/I for comment.

NHSE/I told The Spectator the suggestion that there would be an ‘urgent’ review was wrong and ‘from a defectively drafted job advert’.

The NHS would reportedly review the deaths in the normal way – nevertheless the advert said clinicians would take two days to undertake the review, which is significantly shorter than normal.

Writing in The Spectator, commentator Nick Cohen said there were dozens of warnings since the first stages of the pandemic that those with learning disabilities would need protecting.

They are at a greater risk of respiratory illnesses and have higher rates of obesity, considered to be a risk factor for severe Covid-19.

Mr Cohen slammed the NHS to be ‘uninterested’ and in ‘no rush’ to count excess deaths because group.

He wrote: ‘Official inquiries have examined the disproportionate death tolls among ethnic minorities. But on people with autism and learning disabilities, nothing. Or so little it could as well have been nothing.

‘Until yesterday, that’s, when months late – and long after the time when speaking out may have saved lives – NHS England announced that it had finally accepted what the Care Quality Commission was telling it since June.’

The CQC said of the people they analysed that had died, half were receiving care from social care services in the community, meaning they were surviving in private domiciles but had support from carers, and half lived in residential social care – specialist care domiciles, for example.

The regulator said the Government should think about widening the availability of testing for people with learning disabilities, who are specially vulnerable.

Chief inspector of adult social care at the CQC, Kate Terroni, said: ‘We know that people with a learning disability are at a heightened risk of respiratory illnesses, meaning that usage of testing could possibly be key to reducing disease and saving lives.

‘These figures also show that the impact on this group of people will be felt at a younger age range than in the wider populace – a thing that should be considered in decisions on testing of people of working age with a learning disability.’

Recent Mencap analysis of NHS England data reveals that nearly half of deaths of people with a learning disability registered were COVID-19-related, which is greater than the proportion of COVID-19-related deaths in care domiciles (31.1 per cent in May).

Ms Harris added: ‘It is shocking that a higher proportion of people with a learning disability have died from Covid-19 than people in care domiciles.

‘And people with a learning disability are dying of the virus at a much younger age than the general population.’

The previous Manchester City gamer is completely conscious of what the Red Devils are capable of Manchester United's speed is something Sevilla...
© Copyright 2020 - reporter.am