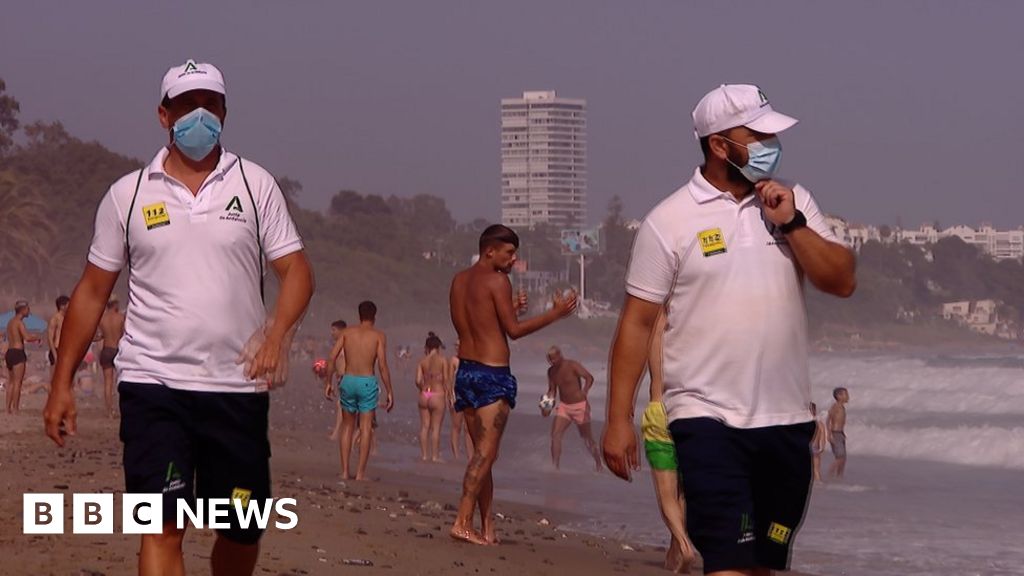 For many the question come july 1st is whether or not they will make it to the beach, so that as resorts over the Spanish coast slowly return to life, the hope is for tourists to return.

Flights are resuming to destinations along the Costa del Sol. After months with no business, hotels, restaurants and bars are reopening and Covid-19 safety measures are now being put in place. These are a few of the voices on Spain’s sun-drenched southern coast.

On patrol with the beach wardens

Strolling over the hot golden sands in Marbella, Sergio and Rafa pause to remind two groups of sunbathers to keep a lot more than 1.5m apart, then stroll on.

They’re element of a small army of 3,000 new beach wardens just hired for summer time. Their job is to patrol Spain’s southern coasts, gently reinforcing new rules to try and prevent any spread of Covid-19.

Some young men are playing football, and both wardens keep these things move up the sand so parents and their kids can play in the surf. A household who brought four umbrellas to the beach are reminded they truly are only allowed two sunshades per group.

“People are pretty respectful about observing the rules,” says Rafa. “But let’s see when tourists arrive from the rest of Spain and everywhere else in Europe too.”

He’s worried what might happen when people finally ensure it is to the beach after months under lockdown. “Alcohol might be a problem. After a couple of drinks people become less inhibited.”

For now it’s only Spanish visitors on the beach and Rafa finds it strange that Spain, which saw so many deaths from Covid-19, is not testing people for the virus if they arrive.

“My wife is in a group that’s at high risk, so the first day I was a bit worried about bringing the virus home from the beach,” he says.

Sitting on the terrace of an Irish pub overlooking the beach in Torremolinos, Janice and Frank and their friends Stevie and David are absorbing the sea air, having spent the past 3 months in their houses on the Costa del Sol.

Now that flights are resuming to nearby Málaga airport, new visitors are trickling in. “We’d normally have a plane flying low over our house every three minutes but yesterday I counted seven in the whole day,” says Janice.

Nearby, individuals are out for an afternoon walk along the Paseo Marítimo, the beachside promenade.

Lockdown measures have been lifted, so the walkway under the palm trees has been used again by joggers and rollerbladers.

“The Spanish have been amazing and it felt very safe,” says David. “They complied with the lockdown rules – and look around! Everybody is wearing or carrying a mask.”

From hospital nurse in pandemic to seafront restaurant

With her facemask on, Rocio González is making certain everything is ready for customers in La Macarena restaurant on the Paseo Marítimo. She checks the tables are spaced far enough apart, and makes certain the hand-sanitiser at the entrance is full.

Rocio is studying nursing. At the height of the pandemic she was drafted in to aid in a hospital in Madrid. Now the amount of cases in Spain has declined she’s not needed there any longer. So she’s home in Torremolinos to help run the family restaurant for what should be the high season.

Ten million foreign tourists arrived on the Costa del Sol a year ago. Already half the 2020 summer season has been lost, but companies are hoping trade picks up soon.

So far most of the tables here are empty.

“This time last season the restaurant would be full, both the terrace and inside. It wouldn’t matter what day of the week it was. Monday, Tuesday or Sunday, we’d be run off our feet,” says Rocio.

Nearby, the charcoal barbecue has been thrilled. Espetos, sardines fresh from the sea, arranged on a skewer, are grilling gently. It’s an area speciality.

“The Costa del Sol is about tourism,” says Rocio. “Everybody knows that. It’s what we live off. So we want them to come.”

There’s nobody at all sitting at the tables outside The Blarney Stone, a bar just a little further over the seafront in Torremolinos. Owner Gary Mercer is here from 10 each day until 11 at night. But it’s deserted.

“I’m opening every day because you have to have a routine, it’s what keeps you going,” that he says. “It’s important people feel welcome. But today I’ve had just one customer, for breakfast. Yesterday, nobody.”

“This time last year I was taking €1,500 a day. Now it’s around €20 a day. Some days zero.” As that he isn’t eligible for Spain’s official furlough scheme, that he says he is had almost no financial support from the Spanish government.

At one end of the bar there’s a giant Liverpool Football Club flag, and the walls are lined with team shirts. When Liverpool won the Premier League late last month, there clearly was nobody to look at on the giant screen so that he stayed in the home to watch the overall game alone.

“I was totally gutted,” he says, “the place would normally have been overflowing.”

Across the street, the huge, white-washed Riu hotel has around 700 rooms but only a fraction were booked this week.

Around the pool are only a scattering of sunbathers where normally it would be crowded.

The bars here rely on the hotels being full. That now depends on package holiday businesses starting up flights again, and that won’t happen until governments start lifting travel restrictions.

The hope on the Costa del Sol is that visitors will start finding its way back in mid-July. “‘For now we just have to buckle down,” says Gary.

An internet loss of over EUR9.5 bn reported for the 2nd quarter vs EUR404 m revenue a year earlier. Bayer saw a 5.6% increase...

The residents of the Armenian resort town of Jermuk are "enraged" after Lydian Armenia dismantled the cabins of the defenders of Amulsar from...
© Copyright 2020 - reporter.am