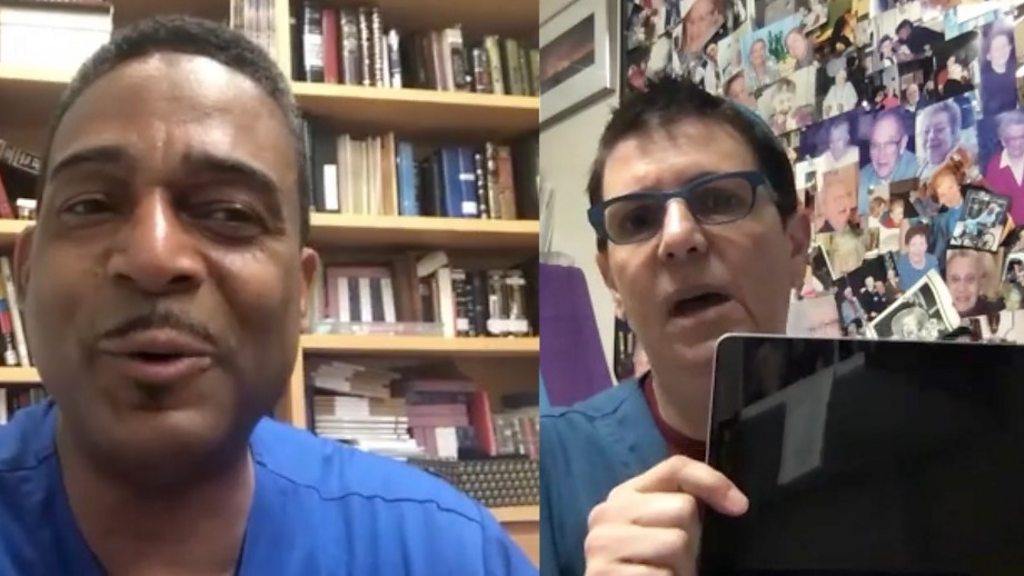 From FaceTiming worried families to helping doctors and nurses with “combat fatigue”, spiritual care workers in hospitals have been thrust onto the pandemic’s frontlines.

Rocky Walker has come closer to death as a hospital chaplain in the coronavirus pandemic than that he did as a soldier in the 1991 Gulf War.

“It was very scary, very dangerous,” he says. “Working in the ICUs and seeing all that suffering and seeing families being decimated by this thing: I didn’t see that in combat, I saw it first hand here.”

In America’s present-day reckoning with death, spiritual care workers have now been thrust onto the frontlines in new ways. And they have played a crucial role in making sure patients isolated by the contagion of the coronavirus do not die alone.

Walker’s job as a chaplain for heart patients at New York’s Mount Sinai hospital changed dramatically when the city was engulfed by the pandemic in April.

The military veteran was overrun by a deluge of new patients, strangers about whom he knew nothing and who were incapable of communicate.

They volunteered to join a Covid-19 unit set up to maintain the centre’s elderly chronic care patients. “I didn’t think (the unit) would want me,” they said. “You need the doctors, you need the ventilators… but the welcome that I got was amazing.”

As a senior staff chaplain, Diecidue had expertise in end-of-life care, but that didn’t prepare them for what happened when they put on a hazmat suit.

“You go from being a comforting presence to being one of the scary people,” they says. “I learned how to manoeuvre my eyebrows a lot and to think about smiling with my eyes.”

An even greater challenge of course was the lack of direct contact – with patients, but in addition with families. “Developing relationships over the phone with people we’d never met,” was very difficult, that he says.

Diecidue already belonged to an organisation which was uniquely placed to deal with the emergency demand for improvising on methods to accompany people in their hardest hours.

It’s called the Chaplaincy Innovation Lab and was setup in 2018 to explore changes in American religious life, specifically the growing number of people that have no religious affiliation or connection, but still seek spiritual care.

The founder, Wendy Cadge, says the group was able to respond rapidly to Covid demands, sharing a few ideas on “creative workarounds” such as tele-chaplaincy, because it had an established network of more than 3000 chaplains across the country and around the world.

The pandemic shone a fresh spotlight on spiritual care workers, she says, but “these headlines about chaplains running towards death, they weren’t actually running: they’ve been there all along. People…just suddenly saw that they really needed their help.”

Probably you can forget so than the dependence on someone to step into the breach and help say goodbye.

Walker worked with nursing staff who could enter patients’ rooms to send messages from family members. Sometimes he literally stood outside the doors and FaceTimed relatives himself, just permitting them to look at their loved ones.

Diecidue started by standing at the door, but did not stay there.

“You’ve got two masks on and you’re shouting through them. And they’re scared,” they says. “So I found myself inching closer and closer. And then I wasn’t supposed to touch the patients, but a hand on the shoulder, even through a blanket and two pairs of gloves, felt comforting.”

Diecidue also used an iPad at the bedside to greatly help family members connect: “Offering people a sense of belonging…at the end of life…is more important than whatever fear I might have had.”

Walker drew on his or her own Christian faith and the faith traditions of the families with whom that he was attempting to remind distraught relatives that even “in a room that’s lonely, we’re never alone”.

As the pandemic subsided in New York that he was confronted with another challenge, a wave of exhaustion and depression amongst healthcare workers.

His military training helped him identify the signs of “combat fatigue,” just like post-traumatic stress disorder (PTSD), he says.

Walker is working together with a PTSD counsellor to answer the need. Mount Sinai Hospital has even purchased foot massage machines to greatly help workers “get off their feet”.

In a clear sign that staff care is now a major new focus of chaplaincy, the Innovation Lab announced a week ago that it turned out awarded a $500,000 (£365,200) grant to expand spiritual care for frontline health workers, and to help chaplains cope with their own upheaval.

Diecidue, who’s trying to be prepared for 50 lives lost in two-and-a-half months, says they’ve been baking bread to cope with the stress, and taking comfort from a therapy dog, that they take to the Rehabilitation Center.

They are also organising memorial services for the staff, including the food handlers and dieticians who’d arrived at know a lot of the patients well.

“The sheer loss has been devastating,” Diecidue says. “I think it’s going to take decades to heal from this generally, without end of life rights, without proper funerals, proper good-byes.

“We’re just going to need to learn how to navigate that in a new way.”

"The rat got LA acting like roaches," one upset resident published after viewing individuals contest the money. As we reported, Tekashi is getting heat...