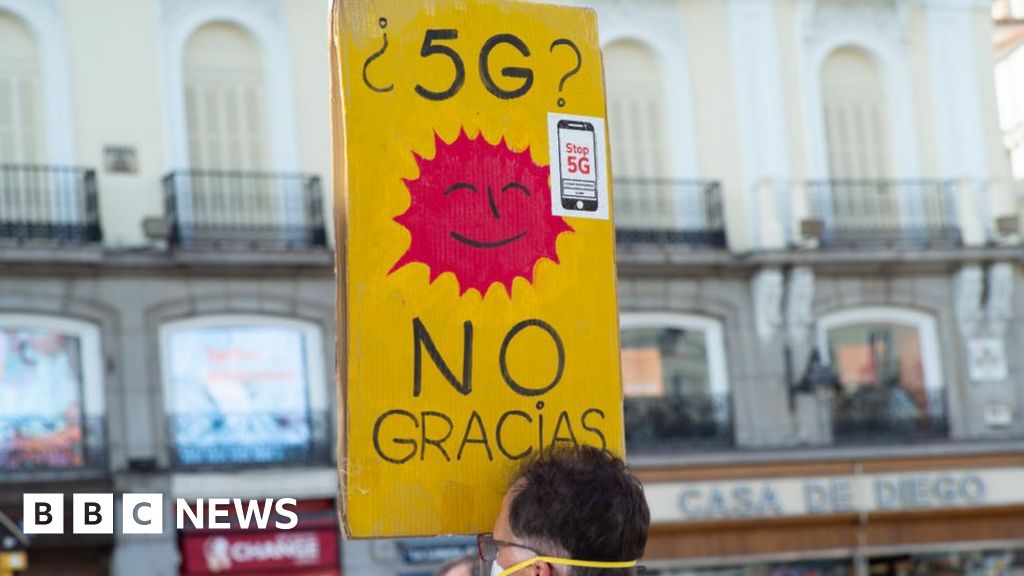 Some of the most persistent conspiracy theories surrounding the coronavirus pandemic have continued to spread around the world.

We’ve chosen some of the most pervasive false claims and look at how long they’ve travelled.

5G to Bolivia and beyond

There’s absolutely no way 5G cellular phone signals either transmit the virus or reduce our defences to it – we’ve debunked these claims, which boffins say are biologically impossible.

But this hasn’t stopped these rumours going world wide, leading to protests even in countries where the technology does not yet exist.

In Bolivia, the sharing of videos of telecommunications equipment along with claims 5G accounts for coronavirus, have led to attacks on masts in two towns.

There is no 5G technology in the country, says Adriana Olivera, a journalist at Verifica Bolivia, but “after seeing these rumours, combined with the fact that everyone is confined to lockdown, it led to people pulling down antennas in K’ara K’ara and Yapacani”.

Even some senior politicians and religious leaders have now been spreading false claims about the technology, linking it to the spread of the virus.

A former Nigerian senator, in a video shared 25,000 times on Facebook, has said the pandemic is purely cover for the introduction of 5G, suggesting it causes harm.

“Those with underlying medical conditions,” he says, “are easily consumed by the reaction of this 5G technology and they die.”

An evangelical pastor in Tanzania said on Instagram and YouTube that the push for the mobile technology is behind the spread of coronavirus.

A former grand mufti in Egypt has spoken on tv about the 5G network and how it might have caused electromagnetic disturbance, making a perfect environment for the spread of coronavirus.

Meanwhile in Europe, fearmongering in addition has led to protests and attacks on masts.

The BBC has reported on lots of incidents of antenna-destruction in the UK.

In Serbia, 5G conspiracies and speculation about Bill Gates have also been popular both on television and in the tabloid press, where stories are often drawn from English or Russian sources.

“So we get to see the same fake news content as the UK, US or elsewhere,” says Lazara Marinkovic, who reports on disinformation for BBC News Serbian.

Celebrities have also fed into the speculation, including Novak Djokovic who unveiled his opposition to vaccinations in April and his wife Jelena who shared a video which promoted conspiracies about 5G.

A spreader of the 5G claims in the English-speaking world has been David Icke – the British conspiracy theorist kicked off Facebook and YouTube.

Clips where that he discusses a match up between 5G and the virus have been censored on social media marketing but continue to be accessible on line, racking up thousands of views on Russian YouTube and Facebook accounts.

There’s no getting far from billionaire philanthropist Bill Gates in the world of the pandemic conspiracy theorists.

One of the most widespread false claims is that the pandemic is just a grand plan masterminded by Bill Gates to implant microchips in to humans and also a coronavirus vaccine.

Despite the total insufficient evidence to aid the theory, its world wide reach has been substantial. The international fact checking network, IFCN, contains a database with coronavirus fact checks from their network of partners. It shows fact-checkers in at the least 14 countries have debunked local versions of the microchip theory, including in Greece, Kazakhstan, the Philippines and Mexico.

One YouTube video from Argentina which endorses the theory has clocked up 1.3 million views.

Another Facebook video from Pakistan repeats the claim and has been viewed almost 650,000 times since it was posted in May.

Some versions of the theory put their very own local spin on it. In Arabic the imaginary microchips were dubbed “Antichrist chips” in a video with over 375,000 views on YouTube and multiple posts on Facebook.

BBC News Brazil has spotted a version of the “microchip” theory in messages circulating on WhatsApp and Facebook in Portuguese. Users are copying and pasting a chunk of text which opens with the words: “I have to confess, Bill Gates is really an evil genius! It’s easy to control submissive people.”

The message goes on to claim that Bill Gates is finalising plans for a “stamp-shaped vaccine that goes under the skin” and that this will undoubtedly be linked to ones own social media profiles in order to get a grip on them via 5G.

The combination of the microchip theory with 5G conspiracies was presented with a boost in Brazil by Allan dos Santos, a powerful supporter of President Bolsonaro, who is being investigated with a Brazilian federal inquiry in to “fake news”.

In a tweet which has been liked significantly more than 14,000 times that he quotes a Pakistani commentator as saying Bill Gates wants to implant a nano-chip vaccine to manage the populace through 5G. Somewhat distancing himself from the claims, he adds “Absurd? It is necessary to debate this.”

The moderation of content around the world is outsourced by Facebook to international fact-checking organisations. Some regions, such as North America and Europe, have significantly more rigorous systems in place than others, which are “fact-checking deserts”, says Rory Smith, from First Draft.

“As more and more people start to believe these conspiracies”, that he warns, “this may result in an increase in vaccine hesitancy which could foster another global public health crisis of its own”.

Send us your questions