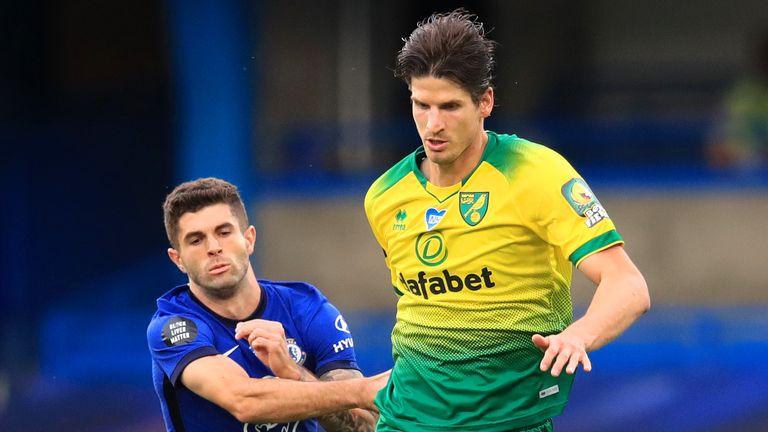 Chelsea tightened their grip on a Champions League spot as Olivier Giroud’s header gave them a 1-0 win over relegated Norwich.

With Manchester United and Leicester, both starting the matchday a point behind the Blues, to play later in the week it was imperative Chelsea picked up three points to guarantee the pair could not leapfrog them – and a dominant display in west London deserved more than the narrow margin of victory.

Christian Pulisic saw a shot on the turn palmed onto the bar by Tim Krul while Giroud missed a number of first-half chances before scoring the only goal, while after the break Pulisic and Willian were both denied, but Chelsea saw out victory relatively comfortably to move four points clear, for now at least, in third.

Norwich have rarely been seen without Teemu Pukki and Emi Buendia this season but their absence was not the only alteration from Daniel Farke, whose usually expansive side set up to frustrate their hosts from the off and avoid some unwanted history by losing an eighth consecutive league game for the first time.

It was testament to their efforts that it took Chelsea 20 minutes to carve out a chance of note from a moment of Jorginho quality, as his lofted ball was volleyed straight at Krul by Giroud under pressure from Ben Godfrey.

That would not be the only chance he passed up. The Frenchman scuffed Cesar Azpilicueta’s pull-back high and wide before failing to connect with Ruben Loftus-Cheek’s flick, while Kurt Zouma flashed a free header wide from a corner.

Chelsea’s persistence has not always paid off this season, but in first-half injury time they did finally find their shooting boots. With Pulisic in space out wide on the left, he cut onto his stronger foot before finding Giroud with a curling cross which the target man buried beyond a helpless Krul, to score in three consecutive Premier League starts for the first time since January 2017.

Norwich had yet to muster a shot of any kind and despite the scoreline little changed after the break, with Chelsea again playing attack against defence while finding their path to a second goal frustrated, not least by the agile Krul.

He had to be alert to turn away Pulisic’s powerful effort at his near post, while Azpilicueta side-footed over his bar from 20 yards, and minutes later Marcos Alonso was left slapping the ground in frustration after seeing his header denied by the goalkeeper.

Giroud was denied a second with his final touch before being replaced five minutes from time, as Godfrey beat him to the near post from Willian’s low cross, but with Kepa in the home goal untested by a single shot on target all night from the Canaries, it was Chelsea singing at full-time as they took the early advantage in the race for the Champions League.

Chelsea face Manchester United in the FA Cup semi-finals at Wembley on Sunday at 6pm. Then they travel to Liverpool next Wednesday live on Sky Sports Premier League from 8pm; Kick-off at 8.15pm, before facing Wolves on the final day of the season on July 26 – in what may yet prove a straight race for a Champions League spot.

Norwich host Europe-chasing Burnley on Sky Sports Premier League on Saturday from 5pm; Kick-off at 5.30pm. They then travel to Champions League hopefuls Manchester City on the final day of the season.

5/5 ©Reuters Law enforcement officers are seen outside a structure where an unknown man apparently threatens to blow up a bomb in...
© Copyright 2020 - reporter.am