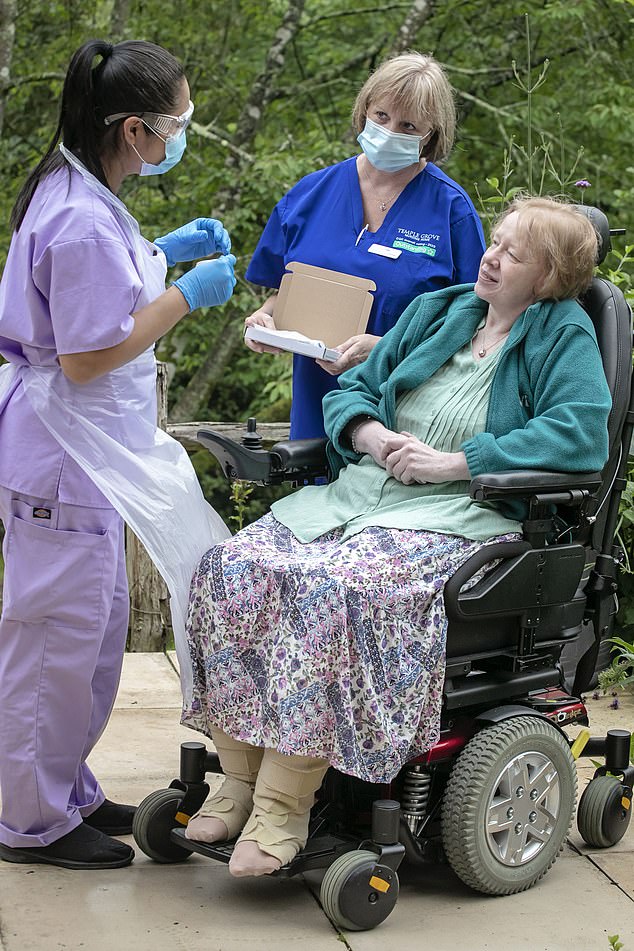 Boris Johnson must perform his promise to fix the care crisis to prevent 1000s of vulnerable residents being put into danger, industry leaders warn today.

In an open letter to the Prime Minister, Care England, which represents 4,000 providers, spells out the way the ‘ravages’ of the pandemic have ‘plunged the sector into depths of uncertainty never known before’.

Almost 30,000 more care home residents died in England and Wales through the pandemic compared to exactly the same period in 2019, including a third who didn’t have the herpes virus.

Care homes were extremely susceptible to outbreaks as they had limited supplies of protective equipment in early stages, minimal access to testing and Government officials didn’t deem them to be at specially high risk. In addition, hospitals were encouraged to discharge patients in to homes in the very beginning of the pandemic in March despite the fact that many were carrying the herpes virus and passed it on to staff and frail residents.

Virus-free home: Temple Grove Staff and resident Karen Emery. Almost 30,000 more care home residents died in England and Wales during the pandemic compared to the same period in 2019, including a third who did not have the virus

Others are believed to have died being an indirect consequence of the herpes virus because they were not able to see GPs or other health care professionals and hospitals were less willing to admit more patients. In its letter, Care England states: ‘With an additional wave beingshown to people there, it is imperative that the Government fixes the stark social care crisis now.

‘With such a large majority in Parliament, now is the time to put an end to all the past inertia and make changes.’ It ‘s almost a year since Mr Johnson promised to ‘fix the crisis in social care once and for all with a clear plan we have prepared to give every older person the dignity and security they deserve’.

The boss of a care home which has remained coronavirus-free said it had decided to lock down early with no support of the Government – however the process was ‘traumatic’.

Alison Barnes, of Temple Grove home, near Crowborough, East Sussex, said she was ‘in tears’ when she closed down the home a couple of weeks before the official lockdown.

She added: ‘The Government wouldn’t give us the guidance – they wouldn’t say “lock down” and that has been really traumatic.’

The £1,500-a-week home has significantly more than 60 residents.

His pledge outside Downing Street on July 24, 2019 followed a Daily Mail campaign which exposed how families were spending billions looking after loved ones with dementia as the Government failed to address the crisis.

Yet in the last 12 months neither Mr Johnson nor Health and Social Care Secretary Matt Hancock has unmasked anything more about their plan. Last week the Prime Minister provoked fury by implying care homes were responsible for their virus death toll by failing to follow correct procedures.

The letter insists: ‘It was outrageous to try to throw the blame for the tens and thousands of tragic care home deaths to the people who have been striving to protect them. It is misleading and unfair to single out care providers when in reality the social care sector was abandoned to give priority to the NHS.

‘The failure to protect care homes has thrown the entire sector into disarray. There is no need for more consultation, inquiries, rhetoric and the like. We are fed up with procrastination; it is a crying shame that this pandemic has shown the nation just what an important sector we are, but we must seize this opportunity and make change or generations to come will never forgive us.’

The Mail has repeatedly exposed the toll of the pandemic on care domiciles. NHS England boss Sir Simon Stevens has previously warned that coronavirus had shone a ‘very harsh spotlight’ on the failings of the care system and urged politicians to fix it in just a year. Labour’s health spokesman Liz Kendall backed the letter from Care England, saying: ‘Boris Johnson promised to fix the crisis in social care and that he must now step up to the mark.

‘Rather than blaming care homes and staff who have gone the extra mile to look after their residents, the Prime Minister should be taking responsibility for the Government’s actions and learning lessons from his mistakes.’

Caroline Abrahams, of Age UK, said the coronavirus crisis had exposed ‘the systemic failings that have bedevilled care for a long time’. Fiona Carragher, of the Alzheimer’s Society, added that care homes and dementia sufferers had been ‘unforgivably abandoned’ during the pandemic.

A Government spokesman said: ‘We are doing all we can to support care homes.’ They stressed repeat testing had been introduced along with ‘significant’ funding, including £600million to boost illness control, and 156million components of personal protective equipment.’

The ravages of the dreadful pandemic have plunged the sector in to depths of uncertainty never known before.

With such a large majority in Parliament, the time has come to put an end to all the past inertia and make changes.

It was outrageous to decide to try to throw the blame for the tens of thousands of tragic care home deaths to the very those who have been striving to protect them.

It is misleading and unfair to single out care providers when in reality the social care sector was abandoned to give priority to the NHS.

This sector supports the vulnerable, protects the NHS and employs more people compared to NHS – yet it has always been the indegent relation.

The Government’s policies placed care domiciles in certain danger when they were already most at risk.

This includes allowing, or indeed earnestly encouraging, hospitals to discharge patients in to care domiciles without COVID-19 tests.

There is a marked contrast between the nimbleness demonstrated by the sector in comparison with the shortcoming of Government quangos and bodies to react quickly during the crisis.

We have lost count of the different versions of guidance.

The failure to protect care homes has thrown the whole sector in to disarray.

We can not fault the generosity of the nearly £4billion the Government has given to the care sector.

But because, despite repeated warnings, you chose to deliver these relief funds through local authorities just a fraction of the intended money has already reached the front line.

With a second wave on the horizon, it really is imperative that the Government fixes the stark social care crisis now.

Successive governments have spent 20 years kicking the can in the future and hopefully that you will honour your commitment from the steps of Downing Street on your first day in power last July to end the social care crisis for good.

There is no dependence on more consultation, inquiries, rhetoric and the like. We are sick and tired with procrastination; it’s a crying shame that this pandemic has shown the world just what an essential sector we have been, but we ought to seize this opportunity and make change or generations to come will never forgive us.

The Turkish ship Oruc Reis triggered from the port of Antalya and reached its location on Monday early morning where it is to...
© Copyright 2020 - reporter.am