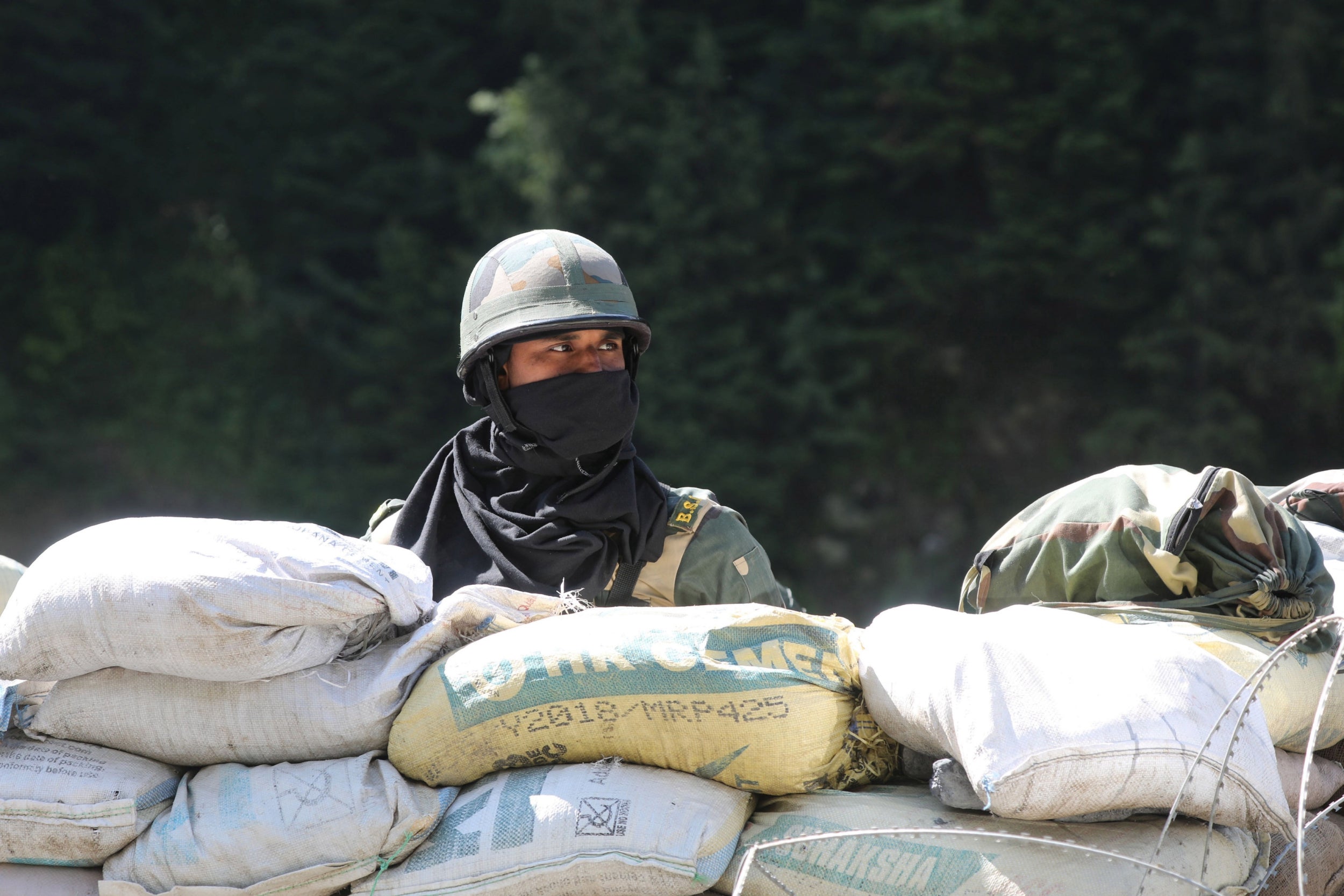 “Two bald men fighting over a comb” was the despairing assessment of Jorge Luis Borges of the Falklands War as the Argentine writer deplored of so many lives lost in a war over a remote, sparsely inhabited island on the edge of the world.

The same may be said of the lethal skirmishes between troops of China and India, “two nuclear armed powers” as every media report reminds, in the Aksai Chin, 14,000 feet up in the Himalayas, barren, covered in snow, with temperatures barely rising above freezing even in the Summer.

But the situation there is undoubtedly serious. Twenty Indian and a large number of Chinese soldiers – up to 35 according to US intelligence analysis – were killed in the worst clashes in the region between the two countries in half a century.

No shots were fired, both Delhi and Beijing are keen to point out, which is in line with standing agreement between the two sides on use of weapons. But that does not negate the obvious level of hostilities between the two forces. Indeed, claims that three of the Indian soldiers were beaten to death, circulating in some of the country’s news outlets, seems worse than more impersonal killings from a long range.

Most of the deaths, it has subsequently emerged, took place when soldiers, in hand to hand fighting, plunged from high and narrow mountain paths into a valley below. The two sides had clashed when an Indian patrol reportedly ran into Chinese troops in an area Beijing was supposedly due to pull out of under a deal made two weeks ago following previous bouts of strife.

These confrontations, with stones, punches and kicks being thrown, had been going on for a while, and there were always dangers of them escalating. The question now is whether they will continue with more casualties taking place. The two sides are holding talks. Both say they want to avoid further confrontations.

But the situation remains combustible. Where exactly the border lies has long been a source of dispute. India sees it as the “McMahon Line” from the time of the British Raj. The Chinese have never officially recognised this, holding instead for “borders of habit that had existed between adjoining peoples for decades previous.” The conflicting stances had led to disputes in the past, including the 1962 war when India suffered a humiliating defeat and sporadic flashes of violence since including the standoff in Doklam three years ago.

A crucial factor in this is China’s “belt and road” programme, the massive infrastructure initiative which Beijing says is aimed at international prosperity but critics accuse of spreading Beijing’s economic and political hegemony and creating debt dependency which can be exploited for economic and strategic gain.

A key route of belt and road is in this area to Pakistan. I have visited Gwador, at the end of this route, and recall being told by Pakistani officials, including prime minister Imran Khan, just how vital it was to the country’s ailing economy. It is also of huge importance to China, which has invested $60bn (£48m) on the Pakistan project and will give it a land route to the western side of the Indian Ocean.

The need for belt and road becomes of even more importance to president Xi Jinping’s government in the political landscape which is emerging with the coronavirus pandemic. Beijing has been accused of suppressing information about the disease to the outside world with devastating human and financial cost. It has also been accused of trying capitalise on the upheaval to spread political influence.

The US and a number of Western countries, as well as others in south and southeast Asia, are looking at removing their industrial supply lines from China. Some states others are now shying away from the belt and road scheme. At the same time Chinese technology companies, most notably Huawei, are facing bans from entering telecommunications networks abroad.

Donald Trump’s announcement that the postponed G7 summit to be held in the US will be expanded to G11 with Russia allowed back, and invitations sent to India, Australia and South Korea was seen as part of a plan to contain China. This is not new policy from Washington, the latter three countries, along with Japan, a G7 member, have long been mooted as democratic counterweights to China in Asia and, as such, were part of Barack Obama’s projected “pivot to Asia” before the then-president got sucked back into the Middle East crisis with the rise of Isis.

The US has also regularly projected India as a key ally in its Indo-Pacific strategy. The militaries of the two countries have been holding regular exercises and the US has increased supply of sophisticated weaponry to the Indian forces which had, in the past, relied on Russia for armaments. Trump made a highly publicised visit to India three months ago when he was reported to have asked Narendra Modi to further strengthen and formalise the defence alliance.

All this has created suspicion in Beijing and there has been repeated warnings to India that it should be wary of American embrace. The Global Times newspaper, a Chinese government mouthpiece said recently: “India needs to be careful not to include the US factor in its handling of any problems in its relations with China… China and India have the ability to resolve their problems. If in a new cold war, India leans towards the US or becomes a US pawn in attacking China, the economic ties between the two neighbours will suffer a devastating blow… It would be too much for the Indian economy to take such a hit at the current stage.”

What would happen if there is a prolonged military confrontation between China and India without outside intervention? The Chinese defence budget is nearly $220bn (£175bn) compared to India’s $52bn (£41bn). But Indian armed forces are now vastly better armed and better prepared than it was during the 1962 debacle.

One also does not know current combat capabilities of the Peoples Liberation Army. It invaded Vietnam in 1979 in response to the Vietnamese going into Cambodia to overthrow Beijing’s allies, the homicidal Khmer Rouge regime. The Chinese vice-premier Deng Xiaoping told president Jimmy Carter during a visit to the US “the little child is getting naughty, it’s time he gets spanked.” But Vietnam, which over the decades had fought off other invaders – the Japanese, the French and the Americans – did rather well. The Chinese forces had to withdraw from Vietnam. Vietnamese forces stayed on in Cambodia for the next ten years.

There have been signals from China it is prepared to use force if necessary. Xi Jinping recently ordered the country’s armed forces to “comprehensively strengthen the training of troops and prepare for war” and “resolutely safeguard national sovereignty”. At the same time one of the country’s most senior commanders, General Li Zuocheng, warned that military action may be needed against Taiwan if it continues to refuse the acceptance of Chinese suzerainty.

This could perhaps be written off as tough rhetoric for tough times. But there have also been violent confrontations. A Chinese ship rammed a Vietnamese ship, sinking it, in disputed waters of the South China Sea. A standoff between Chinese and Malaysian vessels drew in warships from China, but also the US and Australia.

The Modi government has, in fact, has been markedly reluctant to engage in military confrontation with China. It has, for instance, been the most cautious member of the Quadrilateral Alliance set up along with the US, Japan and Australia to uphold the “rules based international order” in the face of Beijing’s military expansion. Delhi has also been cautious about challenging China in what had previously been its spheres of its influence in the Indian Ocean, such as the Maldives.

The Falklands War had significant repercussions. The Argentine defeat led to the fall of the military junta of General Galtieri and a restart of the democratic process in the country. In Britain, it reversed the plunging popularity of Margaret Thatcher with all that has followed in this country.

The clashes between Chinese and Indian forces in another remote location should not have anything like such consequences. But the potential for major problems, local and regional, short and long term, remain with new tensions between China and its neighbours, and America’s projected return as an Indo-Pacific power.

Jennifer Pickering informed CNN the storm that flattened cornfields seemed like a train and seemed like it took the breath out of her...

Last week we learned that Huawei is working on a smartwatch codenamed Stia that will be launched as the Huawei Watch Fit. Today we...

There are a variety of problems that the profession federal government is intensifying: settlement growth and demolition orders versus Palestinian structures; everyday arrests...