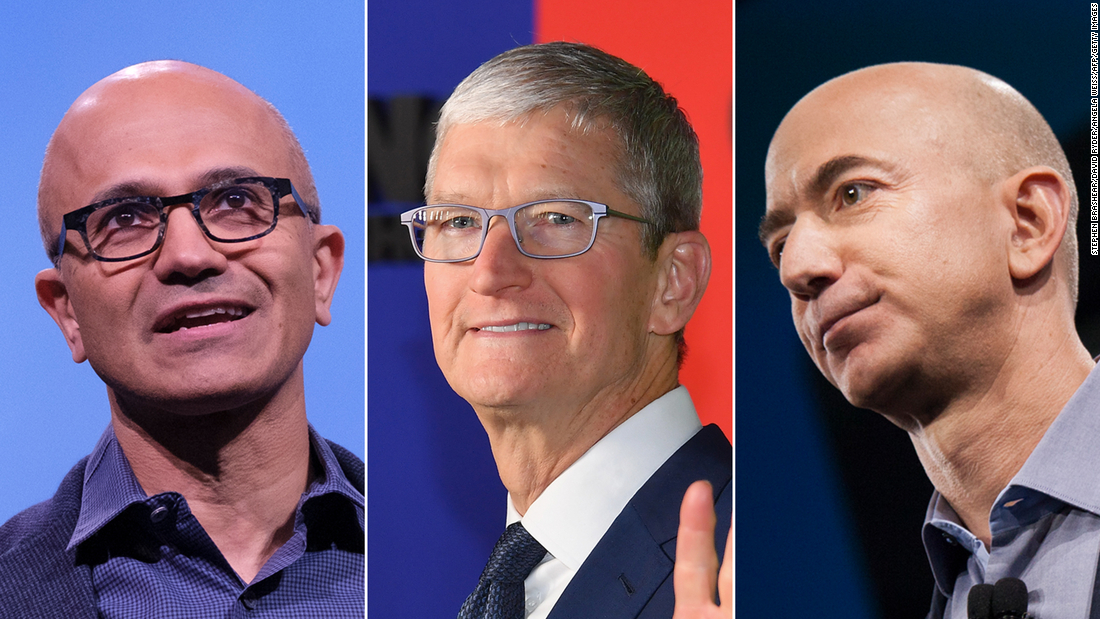 Wall Street is clearly a fan of Apple CEO Tim Cook, Microsoft’s Satya Nadella and world’s richest man, Jeff Bezos of Amazon. These businesses helped propel the Nasdaq to an all-time high above 10,000 on June 9 despite concerns about Covid-19.
Apple is minting money from iPhone sales, and its services unit, the division that features Apple Pay, Apple Music and the App Store, is rapidly growing.
Both Microsoft and Amazon also are leaders in the lucrative cloud computing market with their highly profitable Azure and AWS businesses.

“When growth is scarce, people pay more for growth,” said Don Townswick, director of equity strategies at Conning. “This is an environment where there has been little growth for years — more or less since the 2008 financial crisis.”

Twenty-nine out of 39 analysts who cover Apple have a “buy” recommendation on it, according to data from Refinitiv. Meanwhile, 34 of the 37 analysts following Microsoft label it a “buy” and 48 of the 51 analysts covering Amazon rate it a “buy.”

Time for Apple, Microsoft and Amazon to take a breather?

But look deeper, and fears begin to emerge concerning the three stocks: Some believe they have run too far, too fast.

Apple and Microsoft have each soared more than 30% in 2020, making them top performers in the Dow. Amazon is one of the most readily useful stocks in the S&P 500, surging not quite 70% year-to-date. Despite the bullish ratings from analysts, the consensus price targets for all three stocks are lower than their current prices.

Each of the three organizations is strong and appears to be recession-resistant. But valuations really are a concern, said Northern Trust Wealth Management chief investment officer Katie Nixon, in a report this week.

“These are great companies, but price matters in the long run. The stocks that dominate the Nasdaq are expensive,” Nixon wrote, pointing out that Microsoft and Apple each trade at more than 25 earnings estimates for next year while Amazon is valued at a “whopping” 60 times forecasts.

“These are elevated valuations that leave little room for error, which could represent a headwind for future outperformance,” she said.

Townswick also points out that the three tech titans face much more pressure to post healthier results, particularly if the economy bounces right back next year. After all, if Apple, Microsoft and Amazon can thrive throughout a downturn, shouldn’t they do even better in a rebound?