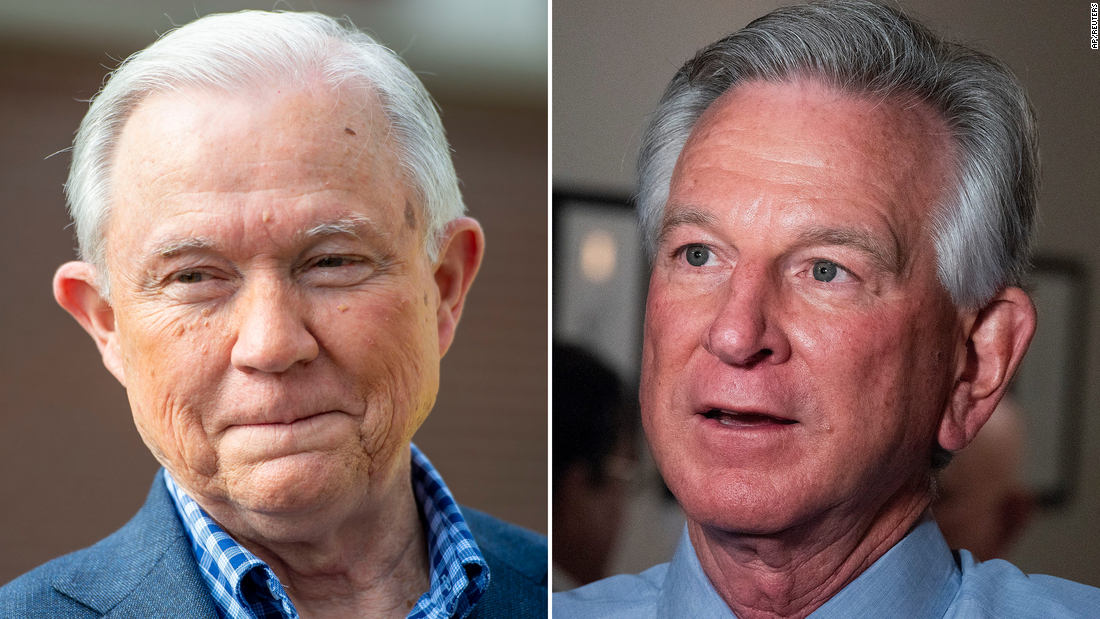 But after that he became the first senator to endorse Donald Trump in the 2016 presidential race, and his political acumen was rewarded with the job leading the Justice Department, he made a move that ended his relationship with the President and imperiled his likelihood of holding elected office again.

Sessions now finds himself locked in a heated runoff with former Auburn University football coach Tommy Tuberville in Tuesday’s Republican primary runoff for his old seat, fighting to reclaim his reputation as a renegade outsider who can upset Washington. Whoever wins the GOP nomination will face Democratic Sen. Doug Jones in what’s likely the Republican Party’s best pick-up opportunity of the year.

It would help Sessions’ if his onetime allies stood by him. But even several of those largely aligned with his views have abandoned him.

Soon following the early March primary, the political arm of the Club for Growth made what president David McIntosh later referred to as a “tough call” and endorsed Tuberville. The conservative group rates lawmakers by a purity test on free market ideology. But its decision was not entirely made on the candidates’ policy positions. It was influenced by Trump, the person in the race who perhaps matters most of all. The President has opposed Sessions ever since his then-attorney general recused himself from the FBI probe into Russian interference in the 2016 campaign.

In the Senate, Sessions earned an 87% lifetime score from the Club, on par with other current members it considers “true American patriots” like Missouri Sen. Josh Hawley. McIntosh told CNN this week that Tuberville “really hit it out of the ballpark” in their interviews discussing economic issues like taxes, spending and regulatory relief, and was more supportive of trade agreements than Sessions, while still being “strong” on China.

But Trump’s endorsement, given to Tuberville less than a week earlier in the day in March, was also a major factor for the club, which initially opposed Trump in the 2016 primary, but has long been an arbiter in GOP congressional primaries.

“They’re both conservatives,” McIntosh said. “We just thought Tuberville was the better conservative, and with Trump’s support, did have a better chance of beating Doug Jones.”

Now Sessions is an underdog in the race for his old job. He’s lost the support of the President and essential former allies like the club, whose affiliated super PAC, Club for Growth Action, has spent about $1 million on advertising in the primary, in accordance with Kantar’s Campaign Media Analysis Group, matching Tuberville’s campaign and outspending Session’s. Club for Growth Action’s adverts have put Trump’s endorsement of Tuberville front and center, including one of TV hosts simply reading a Trump tweet praising the former football coach as a “REAL LEADER” who “will never let MAGA” down.
On the campaign trail, Sessions has sought to downplay the tension between him and his old boss. But voters regularly bring up the President’s scorn toward Sessions, who finished about a percentage point behind Tuberville in the March primary, which led to Tuesday’s runoff. Roy Moore, a twice-defrocked state Supreme Court justice who was accused of sexual assault in his 2017 campaign against Jones, finished fourth in the primary — a relief to national Republicans who hoped in order to avoid him jeopardizing the seat again.

On Saturday, Trump urged Alabama voters to cast their ballots for Tuberville, calling his former attorney general in a tweet a “disaster who will let us all down.”

Sessions fired back that his “honor and integrity are far more important than these juvenile insults” and claimed that Tuberville is “too cowardly” to debate him.

“As you know, Alabama does not take orders from Washington,” Sessions tweeted.

Sessions were referring to Trump’s poor record in backing candidates in Alabama Senate races. In 2017, the President endorsed then-Sen. Luther Strange, who lost to Moore in the GOP primary. Trump then endorsed the judge, who lost to Jones in the overall election.

Sessions still commands a powerful, conservative following. In 2014, Sessions was so beloved in Alabama that he won a fourth term without even needing to face a Democratic opponent, a first in the state’s history. During the 2016 presidential race, Sessions was delighted to see his long held views on trade and immigration touted by Trump, while the club spent millions trying to defeat Trump’s bid to function as Republican party’s nominee. Trump, who would go on to beat Hillary Clinton in the state by nearly 30 points, nominated Sessions to lead the Justice Department.

But in March 2017, Sessions recused himself. Trump considered it a betrayal. For months, Sessions carried a resignation letter in his pocket when he went along to the White House, in accordance with former special counsel Robert Mueller’s report. Trump eventually fired Sessions in November 2018, the afternoon after the midterm elections, and he never got over his grudge. He backed Tuberville. “Alabama, do not trust Jeff Sessions,” Trump tweeted in May. “He let our Country down.”

Tuberville has hammered Sessions within the decision, saying in an ad that he “quit on the President” and “failed Alabama.” In response, Sessions has touted his strong support of the President. In adverts, Sessions put back on the red “Make America Great Again” hat and insisted he never said a “cross word” concerning the President. He tweeted he “protected the rule of law” and contributed to Trump’s “exoneration.”

Sessions’ campaign has perplexed officials within the White House, who witnessed how Trump publicly castigated Sessions for months before eventually forcing him out of his job. Though he hired him, Trump has since claimed Sessions was not “mentally qualified” for the work and was one of the biggest mistakes of his presidency.

Trump has vigorously supported Tuberville as well as made plans to host a rally in Alabama the Saturday before the runoff, which could have now been a massive blow to Sessions given Trump’s popularity in the state. But those plans were sooner or later scrapped after state officials voiced concern about a large public gathering in the midst of the pandemic.

The coronavirus outbreak has forced both Senate GOP candidates to limit in-person events for many weeks, moving to Zoom conference calls and radio interviews. When candidates were straight back on the campaign trail, it resulted in some awkward moments where attendees weren’t sure should they should wear masks or shake hands. And the spiking outbreak has raised questions in what turnout can look like on Tuesday.

“It’s a runoff in the middle of a pandemic,” one Sessions adviser said when asked about their prediction.

Throughout most of the runoff, Tuberville has led Sessions in the polls, repeating Trump’s slogans like “drain the swamp” and “build the wall” while reminding potential supporters of his winning tenure at Auburn from 1999 to 2008. But Sessions has tried to make a problem of Tuberville’s residency, calling him a “tourist” who moved from Florida to perform for Senate and “an empty suit” who has hidden from the public.

Sessions’ campaign said he previously his strongest fundraising night this week, in the aftermath of an appearance on Tucker Carlson’s Fox News show. Trump may watch Carlson’s show regularly and the host effusively praised Sessions. “We have to have some warriors in the Congress and we need some to push our Republicans, too many of them of hiding out and not speaking out,” Sessions said on Fox.
Sessions in addition has seized on a recent New York Times report showing that Tuberville reached a settlement with investors in a hedge fund that he co-led amid charges of fraud; his partner John David Stroud was sentenced to prison.

“In 2009, Coach Tuberville lent his name to an investment company. It was a big mistake and he’s paid for it,” responded Stan McDonald, Tuberville’s personal attorney and campaign chairman. “Coach Tuberville was as surprised as anyone to learn Stroud had lost all the money, including Coach’s. He never received a dime — it was a dead loss for him and his family between his initial investment, legal fees and eventual settlement. The Lord humbles us on many occasions, and this was such a moment for Coach.”

Jones, who narrowly beat Moore in the 2017 special election, will face a very tough race regardless of who the Republican nominee is, even though senator includes a cash advantage. He has stockpiled $8 million in his campaign war chest, compared with about $1 million combined for Sessions and Tuberville, based on the latest Federal Election Commission filings.

Conservative groups are already mobilizing to defeat the Democrat. One Nation, a super PAC, has booked $3.2 million in TV advertising for the race over July and August, in accordance with CMAG and a spokesman for the group.

“We’re not going to take it for granted but the reality is if our voters show up we win,” Terry Lathan, the Alabama GOP party chair, told CNN. “I don’t care how much money Doug Jones has. I don’t care how many Kumbaya, ‘can’t we all get along’ TV ads (he’s) run. That’s nice, and it makes you feel far more warm and fuzzy, but what doesn’t make us feel warm and fuzzy is his voting record. And he owns that.”

This story has been updated with additional details.